Russians' Disapproval of Gorbachev Shouldn't Dominate How He is Remembered 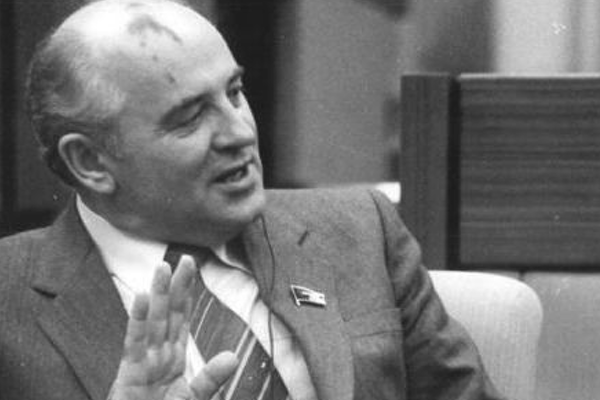 Gorbachev’s recent death stirs thoughts of his legacy. Although he only ruled over the Soviet Union for six years (1985-1991), there is no doubt that his tenure as head of its Communist Party and president of the USSR had a tremendous impact, and not just in his own country but also in the world in general.

But whether that impact is seen as good or bad varies greatly depending on where you live. In Western countries, including the USA, you’re likely to view him in a more positive way--he played a key role (I would argue the key role) in ending the Cold War and making democracy possible for various countries in Eastern Europe. German ex-chancellor Angela Merkel, for example, “praised him for changing the world for the better and allowing a reunified Germany to join NATO.” If you live in Russia, however, you’re likely to see him in a more negative light. One Russian politician said in 2009, “Gorbachev is the most hated man in Russia.”

To understand why ask yourself how you would feel about a U.S. president who presided over the dismantling of a USA which lost one-quarter of its territory and half its population. And in the decade that followed you experienced a great deal of misery. That’s what happened to Russians, which helps to explain why Gorbachev and his Russian successor in the 1990s, Boris Yeltsin, have been much less popular than previous Russian dictators like Stalin and Brezhnev, or Russia’s only de facto twenty-first century leader, Vladimir Putin. In 2005 the latter said the collapse of the “Soviet Union was the greatest geopolitical catastrophe of the century.”

Illustrating the differing evaluations of Gorbachev depending upon where you live are the reflections of Mansur Mirovalev, who was born in the USSR in the 1970s, but in 2003 came to California to spend two years studying journalism. As a boy, he “firmly believed in the forthcoming Communist utopia,” and after Gorbachev “reshaped everything” and allowed revelations of past Soviet atrocities he “hated him.”

The new Soviet leader’s reforms could be summed up in three Russian words, glasnost (openness), perestroika (restructuring), and demokratizatsiia (democratization). The first meant more freedom of expression and less censorship and government secrecy. But Mirovalev thought it “defamed our heroic, Communist-era past.” He was also critical of the results of perestroika, which primarily meant economic restructuring. “Gorby’s reforms made capitalism possible—an ugly, mutant version of capitalism that relied on corruption. Very few got rich quickly, but inflation was galloping, and food disappeared…. My parents’ savings turned into nothing, and their salaries weren’t enough to buy food, let alone basic clothes.” Nor did Mirovalev think that demokratizatsiia was a positive development. He joined many other Soviet citizens in thinking that Gorbachev’s “transition . . . made lives and careers useless” and increased “joblessness, organized crime, loss of contact with relatives in other ex-Soviet republics, and the emergence of kleptocratic, corrupt governments.”

After leaving California and eventually ending up in Russia, Mirovalev interviewed Gorbachev on several occasions between 2007 and 2013. As a journalist, he realized he had to try to be more objective about the former leader whom he had once hated. He came to realize that Gorbachev “was the only true nemesis to Soviet dictator Joseph Stalin, and that his very attempt to reform the USSR was doomed from the start. But Gorbachev’s failures were more beneficial for the almost 300 million Soviet citizens than any great achievement of his predecessors, because they forced a complete break from one of history’s darkest eras.” Mirovalev ends his 2021 article writing “I love Mikhail Sergeevich Gorbachev.”

Since Gorbachev’s death there have been many evaluations of his legacy. One U. S. source (Professor Erik Loomis) opined, “Gorbachev is probably best described as the greatest failure of a leader in Russian history…. When we evaluate his legacy, we need to do so outside an American context, even if we’re American and we’re glad the Cold War ended.” And the author adds, “We have to see his legacy in the light of how he is perceived in Russia, not just that he helped the US win the Cold War. The bitterness toward him in Russia is very real and I’m not sure the world is better off for his failures.”

In The Atlantic staff writer Anne Applebaum, also author of several books dealing with the Soviet Union, was also critical of Gorbachev, writing about him, “Almost nobody in history has ever had such a profound impact on his era, while at the same time understanding so little about it…. He never understood the depth of the rot inside Soviet bureaucracies or the amorality of the bureaucrats. In the end, he wound up racing to catch up with history, rather than making it himself.”

Another author and staff writer at The Atlantic, Tom Nichols, writes a more mixed evaluation of the former Soviet leader. “As you listen to the tributes, remember always that Gorbachev was trying to rescue, rather than destroy, the U.S.S.R. and Soviet Communism….  He was too decent for a job that required a fundamental lack of decency. In the end, he showed the courage and humanity not to use force to try to turn back the clock—a lesson lost on his latest successor, Vladimir Putin.”

In Foreign Affairs still another author, but also a former State Department expert on Russia and Ukraine, Michael Kimmage, also comments on Gorbachev’s decency, saying it “was exceptional.” The Soviet leader had the “means of mass violence at his… disposal, but for the most part, he chose not to use them against dissident or breakaway movements in the Baltic republics, Czechoslovakia, East Germany, Hungary, and Poland. He did not want to let those Soviet republics and satellite states go,” but he did so rather than crush them. Kimmage also admires the manner in which Gorbachev gave up his own power rather than trying “to summon the military, call for violence in the streets, or seek out loyalists within the KGB to keep him in power by force.”

But, while admiring Gorbachev’s decency, Kimmage thinks “he was a catastrophically bad statesman.” And although he “cannot be blamed for Putin’s terrible wars in Ukraine,” Kimmage does think he bears some responsibility “for a set of circumstances that served as the precondition for Putin’s wars and for the disastrous state of Russia’s relations with the West.”

Also seeing both the positive and negative in Gorbachev’s six years of rule, was Ronald Suny, one of the U. S.’s most distinguished historians of the Soviet period. He concludes, “Gorbachev tried to do too much, too fast without the resources to achieve his goals. By 1990 his own weakness and indecision had derailed the revolution from above. A great emancipator, Gorbachev left a mixed legacy. He expanded freedom for millions but at the same time unleashed roiling waves of nationalism and left the upturned soil for renewed authoritarianism.”

Perhaps most favorable toward Gorbachev is Katrina vanden Heuvel, editor and publisher of The Nation. She and her now deceased husband, Stephen Cohen, who was a leading U.S. historian of Russia, were personal friends of Gorbachev, and she writes: “Many Russians still revile him; they blame him (along with Yeltsin) for destroying the Soviet Union and for the economic and social misery that followed. Other Russians, however, view him, as I do, as a leader of vision and courage. If democracy eventually returns to Russia, Gorbachev will (and should) be remembered as the greatest reformer in that nation’s tormented history.”

She fondly remembers, partly from personal experience in Russia, how “step by step, from 1985 to 1991, the mechanisms and taboos of censorship were dismantled, Here, too, the result was astonishing: virtual freedom of the press, both print and broadcast, at least in the national media.” In those years I was also in the Soviet Union, though only for a few weeks almost every summer. It was exciting to see the greater freedoms evidenced there every year under Gorbachev’s leadership, more freedom for the press, for demonstrators, for academicians, and for nationalities like the Ukrainians, Armenians, and Estonians. At the same time, Gorbachev was helping end the Cold War.

My own evaluation of Gorbachev’s rule has not changed much since the first edition of my A History of Russia (2 vols.) was published twenty-five years ago. In it (and in the second edition), I end my chapter on Gorbachev’s domestic and foreign policies with a mixed review.

He was unable to hold his country together…. partly because of his own failings. After a year or two in power, he became increasingly impatient to institute changes in both domestic and foreign policy, and he sometimes failed to think through the consequences of policies before he enacted them.

… Despite his charismatic appeal in the West, he increasingly was unable to inspire the Soviet peoples with his vision of the future, partly because it was somewhat murky, always changing and evolving….

Yet, given the difficulties he faced (including reactionary resistance and ambitious politicians such as Yeltsin), decades of Communist rule and misrule, and the natural aspirations of many non-Russians for national independence, it is hardly surprising that he failed to hold the Soviet Union together. In many other ways, however, he did not fail. In addition to being mainly responsible for ending the Cold War, he set in motion changes that helped bring greater freedom to many peoples in the world, especially in east-central Europe, Russia, and many other parts of the former USSR.

Although all the death and destruction in Ukraine, a war fought between the two most significant parts of the old USSR, may affect our judgments about the breakup of the Soviet Union, the above cited analysis still seems valid.

By the way, in 2015 Gorbachev said "I am, after all, half Ukrainian. My mother was Ukrainian, and my [deceased] wife, Raisa, was too. I spoke my very first words in Ukrainian, and the first songs I heard were Ukrainian."

As a politician Gorbachev certainly had his limitations, and perhaps many in the West fail to stress these enough. In judging him we should certainly take the opinions of Russians into consideration, but they should not regulate our final evaluation of him or his years in power. In the mid-1930s many Germans approved of Hitler. Should the Russian’s judgment--ranking Gorbachev lower than Stalin, Brezhnev, and Putin--be ours? Rating him so low reflects too much emphasis on state and national power and too little appreciation for values such as freedom, democracy, and peace.