Catherine Ceniza Choy is professor of ethnic studies at the University of California, Berkeley, and the author of the new book Asian American Histories of the United States  (Beacon Press, 2022). 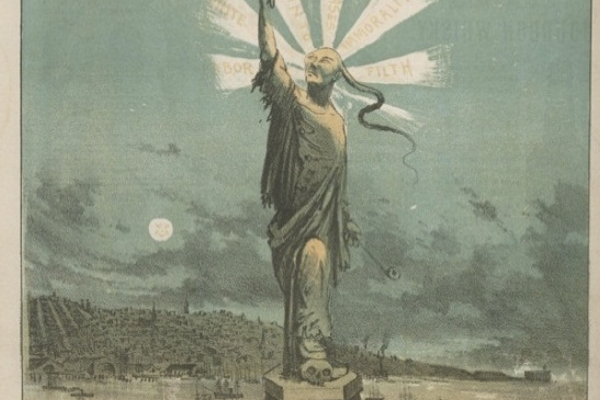 Since 2020, Asian Americans in the United States have experienced dual existential crises: anti-Asian violence and COVID-19. According to Stop AAPI Hate, nearly 11,500 hate incidents were reported to its organization between March 19, 2020 and March 31, 2022. While the uptick in this violence has been connected to present-day coronavirus-related racism and xenophobia, anti-Asian violence and the association of Asian bodies with disease are not new. Rather, they have a history that is as old as the earliest mass migration of Asians to the United States. Furthermore, a closer look at this history illuminates a distinctive kind of immigrant health paradox. Although Asian immigrants have historically contributed to the health of the U.S. nation as farmers and harvesters of fresh produce and as frontline health professionals, they are among the targets of anti-Asian violence.

The Medical Scapegoating of Asian Americans

As the numbers of Chinese arrivals in San Francisco increased after the discovery of gold in northern California in 1848, the social stigma of Chinese bodies as a weak and inferior race combined with perceptions of them as foreign economic competition fueled anti-Chinese sentiment in the region and the state. Tragically, the concurrent development of San Francisco’s public health institutions in the second half of the nineteenth century furthered anti-Chinese sentiment through municipal reports that blamed Chinese immigrants for smallpox outbreaks. Public health officials instituted measures--quarantine, physical examination, the fumigation of their clothing and baggage--that targeted Chinese arrivals at the city’s port. Such medical scapegoating extended to ethnic enclaves. San Francisco Board of Health Annual Reports from 1876 to 1877 referred to the city’s Chinatown as a “moral and social plague spot” and a region “contaminating the atmosphere.”

Print culture spread anti-Chinese, medicalized horror stories to the general public. An 1881 political cartoon, entitled “A Statue For Our Harbor,” depicted the Statue of Liberty as a Chinese laborer wearing tattered clothing, a human skull at his foot, and an opium pipe in his hand. His queue or traditional ponytail was likened to a slithering snake, while a rat tail peeked out from behind the human skull. This classic representation of “yellow peril,” was highlighted through the following capitalized words that emanated from the Chinese laborer’s head in lieu of Lady Liberty’s crown: FILTH, IMMORALITY, DISEASES, RUIN TO WHITE LABOR.

European settlers had also spread smallpox and other diseases, yet the belief in Western medical superiority contributed to the popular nineteenth-century idea of manifest destiny, the divine right of the United States to expand westward across the continent and the Pacific Ocean and into the Philippines. Although Filipino nationalists had been fighting for their independence from over three centuries of Spanish rule, ideas that linked Filipino bodies to unsanitary practices and diseases, such as leprosy, justified U.S. colonization of the archipelago and its “benevolent assimilation” policies, which included Americanized nursing training.

Concurrently, Japan was emerging as a global power through imperialism, but that did not prevent the linkage of Japanese immigrant bodies in California to diseases, such as typhoid. In 1910, when a U.S. Public Health Service physician found that many Indian arrivals at Angel Island’s Quarantine Station had hookworm, the threat of disease became grounds for the movement to exclude them from the entering the United States.

Asians and Asian Americans protested medical scapegoating in multiple ways. Some rejected the purported supremacy of Western medicine and refused to partake in American medical practices. Others filed U.S. federal lawsuits, criticizing the unequal administration of public health-related laws. A Chinese immigrant detainee at Angel Island Immigration Station wrote a poem on a barrack wall: “I thoroughly hate the barbarians because they do not respect justice.... They examine for hookworms and practice hundreds of despotic acts.”

They understood that at stake was not solely their livelihoods, but also their lives. Their denigration as filth, immorality, disease, and ruin to white labor dehumanized them and made them targets of violence.

Like medical scapegoating, anti-Asian violence permeated and linked the experience of diverse groups of Asians in the United States beginning in the second half of the nineteenth century. In the 1885 Rock Springs Massacre in Wyoming, 28 Chinese workers were killed, their homes and bunkhouses set on fire. Historian Beth Lew-Williams notes that in 1885 and 1886, over 168 communities in the U.S. West expelled their Chinese residents, united in their vehemence that “the Chinese must go.”

International relations, most notably war, triggered anti-Asian violence. During World War II, Japanese Americans were racialized as an enemy of their own country. Their homes and businesses were targeted for arson, shootings, and vandalism. Beginning in 1942, approximately 120,000 Japanese Americans were forcibly relocated and incarcerated in remote internment camps across the United States without due process. Even though Asian American men served in the US armed forces and Asian American women worked as Rosie the Riveters, non-Japanese Asian Americans were racially lumped together with the Japanese. They feared going out at night and some were beaten even in broad daylight.

The passage of the Immigration and Nationality Act of 1965 and U.S. involvement in the Vietnam War resulted in new mass migrations of highly educated, professional Asians as well as diverse waves of Vietnamese, Hmong, Laotian, and Cambodian refugees. Advanced educations and alliances with U.S. military forces did not protect them from racial violence. In 2017, Indian-born engineer Srinivas Kuchibhotla was fatally shot by a man with a semiautomatic pistol. The man yelled, “Get out of my country!” before opening fire.

Thus, despite their many differences in national origins, languages, faiths, generation, and socio-economic status, and despite their longstanding and multigenerational presence in the US, histories of anti-Asian hate and violence in the United States have woven the fates of Asian Americans together. These histories seep into our present.

A closer look at Asian American histories of immigration and violence illuminates a distinctive immigrant health paradox. Although Asian American labor as farmers and harvesters of fresh produce and as healthcare professionals have contributed to healthier American foodways and US healthcare delivery, Asian Americans continue to be the targets of medical scapegoating.

Beginning in the late 1860s, Chinese workers transformed tens of thousands of acres of California swampland into arable land. The ingenuity of Chinese horticulturalists, such as Ah Bing and Lue Gim Gong, contributed to the popular Bing cherry and cold-resistant citrus fruits.

By 1909, more than 30,000 Japanese were tenant farmers or farm laborers in California. They produced 70 percent of California’s strawberries, and grew the majority of the state’s snap beans, tomatoes, spring and summer celery, onions, and green peas, fulfilling the increasing demands for fresh produce in the cities. During this time period, many Indian immigrants also worked in farming, growing lettuce and beets. Among them was Dalip Singh Saund, who in 1956 became the first person of Asian descent elected to serve as a U.S. Representative, championing the farmers of his southern California district.

The mostly Filipino young men who came to the United States in the tens of thousands in the 1920s and 1930s labored as migrant agricultural workers. They followed the crops from California to the Pacific Northwest, harvesting grapes, onions, tomatoes, asparagus, potatoes, peaches, lettuce, sugar beets, celery and more. Anti-Filipino violence, meager wages, and poor working conditions contributed to their labor militancy, which culminated in Larry Itliong’s leadership and Filipino American farmworkers’ initiation of the Grape Strike in Delano, California, in 1965.

As a consequence of their Americanized nursing training, over 150,000 Filipino nurses have immigrated to the United States since the 1960s. They have cared for the most vulnerable Americans primarily at the bedside in acute and long-term patient care. Partly as a result of their direct exposure, they have suffered a disproportionate toll from COVID-19. Yet, they and other Asian American healthcare professionals are among the targets of present-day anti-Asian hate and violence.

Why does this violence happen over and over again? One root cause is the phenomenon of not knowing Asian American history, including both the long-standing tragedy of anti-Asian scapegoating and Asian American contributions to American health and health care delivery specifically, and the nation’s culture, economy, and government more broadly. Thus, recent changes in K-12 education in Illinois, New Jersey, and Connecticut to include Asian American and Pacific Islander histories in schools are important and hopeful steps. We cannot begin to change what we do not know.