For America, Let's Send the Adults Back to School

David M. Chamberlain has been teaching history for twenty years, first at Kennett High School in northern New Hampshire and for the last decade at Burke Mountain Academy in Vermont.  He recently accepted a position teaching U.S. history at The Lawrenceville School in New Jersey.  He is a James Madison Fellow and his work on environmental history has been published in Appalachia, The History Teacher, and Environmental Practice. 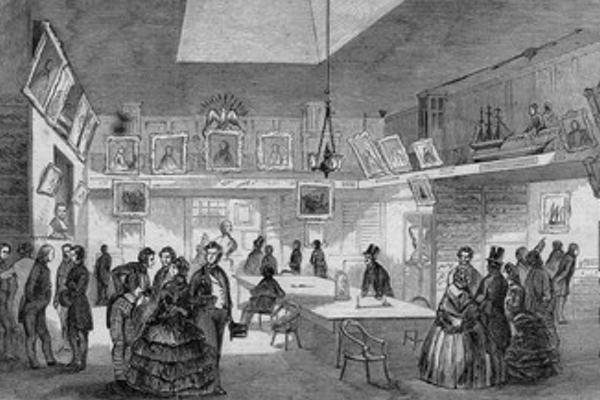 Each day seems to bring dire assessments of the poisonous state of America’s political culture and urgent warnings that our fraternal animosities and passions may soon erupt into widespread violence.  Prominent American historians have taken to the pages of major newspapers to express concerns that our political divides are beginning to resemble those that rent the union in the 1850s.  In her new book How Civil Wars Start, UC San Diego political scientist Barbara Walter concludes that the United States is an anocracy, a country that occupies a perilous position between autocracy and democracy and which is ripe for internal conflict. Anxieties are growing too among foreign observers of American politics. Recently, Tom Homer-Dixon, a respected Canadian intellectual, urged his nation to begin contingency planning for a crackup of the American polity.  Ordinary American citizens are apparently seeing through the same dark prism as experts. A recent CBS poll finds that 62% of Americans believe that in the aftermath of a future presidential election, the losing side will resort to violence.

What is scarce in our public discourse, however, are practical proposals to dampen intense political partisanship and provide our nation with a path away from what far too many of us have already concluded is an irrepressible conflict.  It is incumbent on all concerned citizens, regardless of political orientation, to support efforts to promote mutual understanding and take the first halting steps toward reconciliation. I have no illusions that such a path will be quick, easy, or without controversy. What I envision is a concerted, bipartisan, 50 state, multi-year approach that draws its inspiration from the lyceum movement of the 19th century and is modeled on the summer seminars that thousands of American teachers, myself included, attend annually.

The lyceum movement arose in the United States in the 1820s and was predicated on the assumption that ongoing education was critical for the civic health and prosperity of the community. In towns across a still largely agrarian nation, adults were provided with opportunities for self-improvement through hearing lectures and debates by scholars and attending classes on a variety of topics. The often parochial world of small town life in the 19th century was enlarged through the creation and maintenance of lyceums across America.

How much less parochial and isolated are we than our forebears? How much are we in need of enlargement ourselves?  It has become a tragic truth of our times that conservatives and liberals have become sorted geographically, with the former inhabiting mostly rural areas and the latter clustered in cities.  To make matters worse, experts warn that we are increasingly living in narrow informational silos, our views circumscribed by the network we watch or the algorithm that steers our social media accounts.  We should take a cue from the lyceum movement and get serious about designing institutions to counter the pernicious provincialism of our own times.

We already possess a contemporary template for how this new lyceum movement could be built.  Every summer organizations such as the National Endowment for the Humanities and the Gilder Lehrman Institute of American History bring together cohorts of teachers to study different topics at sites across the nation.  Over the years, I have been fortunate to attend seminars on John Steinbeck, the history of the transcontinental railroad, and the Pacific Theater during World War II.  In a typical summer, there are scores of such seminars conducted, which allows thousands of teachers to come together to learn from renowned scholars, to share ideas with each other, and to renew ourselves by temporarily throwing off the constraining routines of our own lives.

I propose that we replicate this model but instead of bringing teachers to sites across the country, we bring everyday adult citizens.  Citizens would be selected through a formal application process and travel costs, meals, and accommodations would be paid by philanthropic organizations and perhaps pledge drives conducted on our ubiquitous cable news shows. Each state could host one of these citizen seminars, inviting 50 people, more or less evenly split between Republicans, Democrats, and independents, to a weeklong event.  Participants would live, eat, recreate, and study together in a communal setting such as a college dormitory or convention center.

Ideally, states would select a venue within their borders that would appeal to our collective identity as Americans to remind attendees of the bonds that still unite us.  National Parks and sites of historical significance would make ideal places to learn together and soften obdurate hearts.  During the week, attendees would discuss assigned readings about history, civics, and contentious contemporary debates. There is no dearth of pressing topics to consider.  One day could be devoted to the problem of race in American history, another to the second amendment and gun policy, a third to our basic constitutional architecture.  Imagine the conversations that could ensue, the mutual respect and trust that could be fostered, if citizens simply had a structured forum to share their views with civility.

The overriding goal of the week though, would be teaching participants about the central role that norms play in a democratic republic.  Sadly, many citizens have derived from their studies of the American system of government that the U.S. Constitution alone is sufficient to safeguard our democracy and ensure our cherished rights. To borrow from the 19th century poet James Russell Lowell's words on the centennial of the ratification of the Constitution, there is a deeply entrenched faith that the document’s mechanistic checks and balances render it a “machine that would go of itself.”

However, in their book How Democracies Die, Steven Levitsky and Daniel Ziblatt underscore the importance of norms, which they define as unwritten “shared codes of conduct” that are akin to calling your own fouls in pickup basketball or respecting the do-over if there is a close call in a neighborhood wiffle ball game. Establishing the norms that participants agree on are essential to our politics and then agreeing to practice them throughout the week could have a transformative effect on the nation as participants fanned back out to their homes and shared their experiences at their supper tables, their places of worship, their workplaces, and on the internet.

Well respected university professors would deliver lectures each day to contextualize the readings and answer questions.  Local schoolteachers could then help facilitate discussions and activities to encourage participants to learn from each other and to share how they arrived at their own political sensibilities.  Teachers also have hard won experience mediating disputes, calling people back to their better selves and maintaining order.  Our republic is indeed fractious but I am certain that teachers could ensure a weeklong truce between the Don’t Tread on Me Crowd and their woke adversaries.

Samara Klar, at the University of Arizona, has conducted research which validates the merits of the plan sketched above.  Her research has found that participants of bipartisan discussion groups were more likely to modify their views and find areas of common ground than homogeneous partisan groups.  What’s more, they report enjoying their experience and the desire for similar interactions.

Good citizenship is a learned behavior that requires practice.  A 50 state 50 student program would send 2,500 citizens back into their communities annually with a better understanding of public policy and political ideology, but more importantly imbued with a new spirit of civic virtue. Teachers know that very few students leave a classroom unchanged for the better.  Let’s send the adults back to school.