Aileen T. Teague is Assistant Professor of International Affairs at the Albritton Center for Grand Strategy, Bush School of Government and Public Service, Texas A&M University, and is at work on a manuscript on the U.S.-Mexico relationship in the "Dirty War" on Drugs. 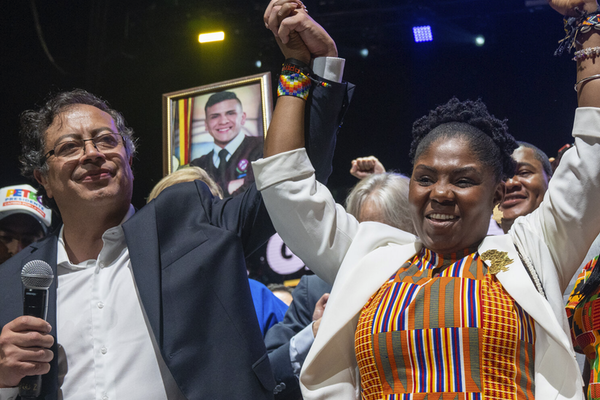 On June 19 in Bogotá, Colombia, everything changed. Gustavo Petro, a senator and former rebel, narrowly defeated businessman Rodolfo Hernández to become president, marking the first time the country elected a leftist president in 200 years. For decades, Colombia has been a bastion of conservatism in Latin America, not to mention a close ally of the United States. Petro’s victory follows a string of leftist victories in Peru and Chile, and the prospect for such a victory in Brazil, where in October former leftist president Luiz Inácio Lula da Silva is likely to defeat the conservative incumbent, Jair Bolsonaro. They join a cohort of left-leaning governments already in power in Mexico, Bolivia, and Argentina. Add to that list leftist dictators in Nicaragua and Venezuela, and what we have is a largely populist, sometimes anti-American region that increasingly rejects U.S. influence. With the apparent rise of the so-called Pink Tide, the United States must rework its policies toward in Latin America or risk alienating many of its regional partners.

In recent decades, Latin America has experienced several political shifts. During the 1960s and 1970s, countries from Panama down to Argentina had repressive military regimes, supported by the United States. Washington kept close company with personalist, caudillo-style leaders with colorful track records of murder, forced disappearances, and other violations of human rights. By the 1980s and 1990s, many countries democratized and incorporated neoliberal reforms that ultimately did little to improve the material conditions of the masses. In the post-Cold War geopolitical environment, however, large-scale democratization made it possible for leftist leaders to ascend to power. What did these leaders want? They preached a discourse of armed and class struggle, opposed privatization, and revitalized the principle of national sovereignty in a globalized world. While boom-and-bust cycles resulted in more conservative leaders coming to power in the first decade of the twenty-first century, since the 2010s, the fire of the Pink Tide throughout Latin America has failed to be extinguished.

President-elect Petro will certainly challenge leaders in Washington accustomed to strong relations with Colombia. In May, the United States made Colombia its 17th “Major Non-NATO Ally.” Colombia is a key U.S. security partner in Latin America and the Caribbean, playing a major role in helping Washington bring down the cartels that continue to motivate a global “war on drugs.” In addition, Bogotá has helped Washington mitigate the effects of the Nicolás Maduro regime in Venezuela. Internationally, Colombia’s current president Iván Duque has been praised for granting legal status to 1.8 million Venezuelan refugees.

But back at home, Duque’s approval ratings have been less than stellar, reaching all-time lows.  The cause has been rising homicide rates in 2021, failed tax reforms, and reports of human rights violations committed by the Colombian National Police. The United States continues to work with high-level Colombian diplomats on outdated security and drug policy issues that seem completely divorced from the needs and interests of the Colombian people. Last year, the United States removed the Revolutionary Armed Forces of Colombia, (FARC) from its list of terrorists while it added two dissident groups led by former FARC militants to the same list. Lifting the “terrorist” label from FARC strengthens the intent of the Colombian government’s 2016 peace accord with the rebel organization, and creates opportunities for the promotion of peace. Yet by redesignating new terrorist groups with connections to FARC, Washington undermined efforts at national healing in Colombia and continued to create divisions in Colombian society. The United States also continues to support aerial herbicidal fumigation techniques in its counternarcotics strategy in Colombia that damage the livelihoods of small farmers.

These issues, coupled with the impacts of COVID-19, highlight why Washington is more disconnected from Colombia (and the region at large) than ever. It is a painful truth that rings true as the United States’ important ally joins the Pink Tide. The Colombia case serves as a microcosm for U.S. detachment from issues promoting the health of the western hemisphere.

The delicate position of the United States in the region was on display last month at the Summit of the Americas, which proved an embarrassment. The planning process was chaotic, key leaders such as Mexico’s president decided not to attend because the United States excluded dictator presidents of Cuba, Nicaragua, and Venezuela from the invite list, and the Biden administration’s economic initiatives for the region seemed vague, hastily constructed, and out of touch.

When the United States does engage with the region, its motivation has normally been counternarcotics or pushbacks on regional migration. Now, perhaps, U.S. policymakers’ greatest obsession in the day-to-day is growing Chinese and Russian influence, which seems to be the only thing pushing Washington to really think strategically about its long-term strategy for Latin America. China’s growing importance is noteworthy, but Latin America does not want to be the battleground for superpower conflict.

That said, China is more pragmatic in its policies toward the region, employing a mix of soft-power diplomacy replete with material inducements. Not focusing on political ideology as a precondition for action in the region works for Beijing. At times appearing apathetic, the United States tends to be more value-driven in its diplomacy, a notion underscored by a militaristic view of hemispheric relations informed by the Monroe Doctrine and the Cold War.

With the resurgence of the Pink Tide, the U.S. way of administering its relations with the countries of Latin America is sure to frame how these new left-leaning leaders will (or will not) cooperate. This is at a time when U.S. values are perceived in the region as fragile, fleeting, and subject to volatility due to the polarization of U.S. domestic politics. Given this political baggage, promoting a positive U.S. image in the region is not an easy task. In alienating regional partners based on their politics and focusing on antiquated policy issues, Washington risks taking a back seat in regional politics. At the same time, however, China cannot be the sole measure by which the United States seeks to craft its grand strategy for the western hemisphere.  Doing so would teleport U.S.-Latin America relations back to their Cold War days.

The rising Pink Tide does not have to evolve into the latest chapter in superpower conflict. But Washington needs to take measures to rebuild trust and demonstrate a commitment to improve relations with countries that remain more disillusioned than ever with U.S. influence.

Gustavo Petro’s election last Sunday should serve a warning to U.S. policymakers that a change in perspective is badly needed. Washington can either jump aboard and embrace political change or unnecessarily risk being beaten out by China or the growing communities of leftist republics.