The Dangerous Trend of Imperial Nostalgia – It's not Just Russia

Dr. Lawrence S. Wittner  is Professor of History Emeritus at SUNY/Albany and the author of Confronting the Bomb (Stanford University Press). 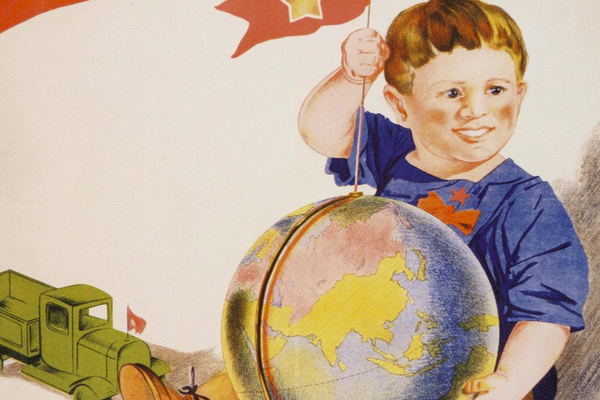 Soviet poster c. 1935. Accompanied by slogan "The Whole World Will be Ours"

Although great empires rank among the most powerful engines of world history, they are also among the most dangerous, especially as they brood over their decline.

The Russian empire provides a striking illustration of this phenomenon.  Traditionally referred to as the “prison of nations,” Russia, in its Czarist and Soviet phases, controlled a vast Eurasian land mass of subject peoples.  But the implosion of the empire in 1991 left Russian leaders adrift, uncertain whether to steer their nation toward a more modest role in the world or to revive what they considered their country’s past imperial glory.  Ultimately, under the leadership of Vladimir Putin, they decided on the latter, employing Russian military power to attack neighboring Georgia, win a civil war in Syria, annex Crimea, and instigate a separatist revolt in Ukraine’s Donbas region.  This February, Putin launched a full-scale military invasion of Ukraine, with horrendous consequences.

Along the way, imperial nostalgia has pervaded Putin’s thinking.  As early as 2005, he told the Russian parliament that the collapse of the Soviet empire was “the greatest geopolitical catastrophe of the century” and “a genuine tragedy” for “the Russian people.”  In July 2021, he published a long historical article (“On the Historical Unity of Russians and Ukrainians”) contending that there had never been a Ukraine independent of Russia.  During a televised address on February 21, 2022, in which he recognized the two secessionist Donbas regions, Putin again invoked the past, claiming that Ukraine was “historically Russian land.”

This lament for a lost imperium, shared by many Russian leaders, not only showed little regard for people trapped under the yoke of empire, but for their actual history.  A Ukrainian nation, with its own language and culture, had existed for many centuries, had been ruled by a variety of nations during that period, and, in 1991, had held a referendum in which 92 percent of the electorate voted for independence from the Soviet Union.  Nor did it seem to trouble Putin that, in the Budapest Memorandum of 1994, the Russian government had formally pledged to respect the territorial integrity and sovereignty of Ukraine.

Disconsolate Russian officials have their counterparts in Britain.  In the aftermath of World War II, as decolonization gathered momentum throughout the far-flung British Empire, the guardians of the Old Order worked to suppress independence struggles and bitterly lamented the decline of imperial grandeur.  In 1956, Prime Minister Anthony Eden, angered by the policies of Egypt’s revolutionary leader Gamal Abdel Nasser, launched a British invasion, along with France and Israel, to retake control of the Suez Canal.  Blocked in their reassertion of imperial power by the Soviet and U.S. governments, British officials were deeply humiliated and, thereafter, largely settled for a junior partnership with the United States in global operations.  Even so, the fact that Britannia no longer ruled the waves continued to sting.  In 2002, Boris Johnson―currently Britain’s prime minister―wrote contemptuously that Africa “may be a blot, but it is not a blot upon our conscience.  The problem is not that we were once in charge, but that we are not in charge any more.”

The French government, too, grew increasingly dismayed in the postwar era as the Algerians revolted, the Vietnamese routed France’s armed forces, and the French Empire disintegrated.  Desperate to fend off imperial collapse, French officials proposed retaining their colonial relationships through a French Union.  In 1958, when the people of Guinea voted, instead, for independence, the embittered French government turned to sabotaging the ungrateful new nation by destroying government records, flooding the country with fake banknotes, diverting shipments of food and medicine, and even removing the lightbulbs from government buildings.

Meanwhile, French military officers, convinced that their own government would fail to subdue the Algerian rebels, seized power, toppled the Fourth Republic, and stepped up France’s counterinsurgency war.  In 1961, when General Charles de Gaulle, installed in office thanks to the coup, negotiated a peace agreement, French military leaders, horrified, again revolted.  Although de Gaulle proved able to outmaneuver them, many disgruntled French military veterans and staunch imperialists flocked to a new, far-right political party.  Its descendent, the National Rally, is led by Marine Le Pen, who recently received 42 percent of the vote for the French presidency.

Though the United States, originally a thin string of colonies on the Atlantic coast, is less often regarded as an imperial nation, the reality is that, through wars and treaties, it dramatically expanded across the North American continent and beyond.  By the end of World War II, it was one of the largest nations on earth, as well as the richest and most powerful.  Even so, as other countries recovered from the conflict and began to assert themselves, fears arose among Americans that they were “losing” nations around the world to Communists, revolutionaries, and nationalists. This anxiety about declining control of global affairs inspired U.S. military intervention in numerous lands, including Vietnam, where, as Lyndon Johnson remarked, the United States could not allow itself to be defeated by a “raggedy-ass, little fourth-rate country.” Although Donald Trump is best-known for promising to “Make America Great Again,” this backward-looking incantation was also employed by earlier presidents, including Ronald Reagan and Bill Clinton, to rally Americans behind reviving the nation’s Golden Age.

China’s leaders―especially Xi Jinping―have reached deeper into the past to locate its era of imperial glory.  Shortly after taking power in 2012 as Communist Party Secretary, Xi lauded his nation’s five thousand years of history and its “indelible contribution” to world civilization.  Condemning China’s more recent years of humiliation at the hands of the colonial powers, he vowed “to achieve the Chinese dream of great rejuvenation of the Chinese nation.”  Xi amplified on this theme in 2018, when, in a speech to the 13th National People’s Congress, he declared that “we are resolved to fight the bloody battle against our enemies . . . to take our place in the world.”  Listing China’s historic achievements, he again promised “the great restoration of the Chinese nation.”  In the 38-minute speech, in fact, he used the word “great” 35 times.  And Xi has managed to turn China into a major power, surpassed only by the United States in economic and military strength.  He has also developed a much more assertive foreign policy, dubbed “wolf warrior diplomacy,” as well as a dangerous military confrontation with the United States and other nations in Asia.

Imperial nostalgia is rife in other lands, as well, among them Turkey, India, Hungary, Austria, and Israel, where it helps foster delusions of grandeur and the aggressive programs that accompany them.