Robert Brent Toplin, Professor Emeritus at the University of North Carolina, Wilmington, taught courses at the University of Virginia after retirement from full-time teaching. He has published several books about history, politics, and film. Contact: rt2b@virginia.edu Website: Presentandpast.com 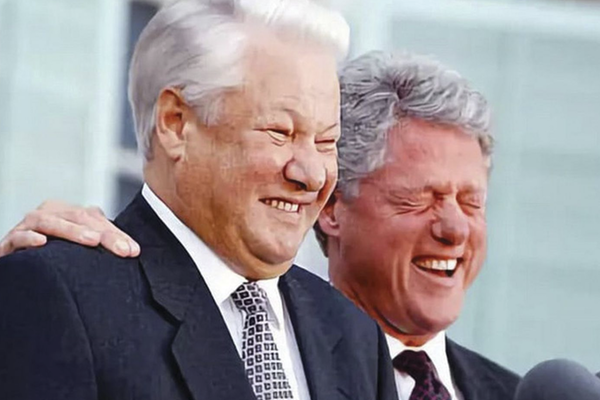 When the Soviet Union collapsed between 1989 and 1991, many Russians hoped their society would quickly transform into a democratic and prosperous country. They were terribly disappointed when it didn’t in the tumultuous 1990s. Russia’s economy cratered. Per-capita income declined by a third. Inflation surged. Corruption was pervasive. By the end of the decade, many disillusioned Russians wanted a strongman to seize control and impose order. Valdimir Putin appeared to be that savior after the outgoing president, Boris Yeltsin, elevated him. In 22 years of rule, Putin strengthened his grip on Russian affairs and became a menacing autocrat.

Was a better outcome possible during the first decade of Russia’s shift out of communism? Did the United States and European countries miss an opportunity to help the Russian people avoid a crisis? Different results were possible, but political conditions at the time made international assistance difficult to mobilize.

It is not surprising that Russia’s exit from communism was disastrous. The Soviet Union maintained a command economy for seventy years. The Russian state controlled most economic activity. Factories concentrated on producing military equipment and heavy industrial goods. Manufacturing offered only limited products for consumers. Once the communist system disappeared, inefficiencies became transparent. The nation lacked effective tax codes and bankruptcy procedures. Private property hardly existed, and property rights received little protection. There was no carefully designed plan in place to ease the shift to a market economy.

Joseph Stiglitz, a distinguished economist, and member of President Bill Clinton’s Council of Economic Advisers, recommended an evolutionary rather than revolutionary transition toward market operations. Build effective institutions first, Stiglitz counseled, and support talented young leaders that are committed to democratic processes. Government’s place in Russia’s economy should not be eliminated haphazardly, he warned. Management of huge extractive industries in oil and gas should remain public to prevent exploitation by oligarchs. When advocates of rapid privatization compared Russia’s oligarchs to American barons such as the Harrimans and the Rockefellers, Stiglitz noted the Americans enriched themselves but also created wealth for the society. The oligarchs aimed to exploit Russia’s assets, leaving the country poorer.

Just as there was no plan in place to ease the economic transition, no plan was well developed to guide the rapid change from autocracy to democracy. For nearly seventy years Soviet society had been managed by dictators and the Politburo, the Central Committee of the Communist Party. When that system disintegrated, conflicts grew.

The powers of the parliament and the president remained unclear, leading to conflict. President Boris Yeltsin disbanded the Russian parliament in 1993. Members of parliament tried to impeach him. The nation seemed to be on the brink of civil war. Troops loyal to Yeltsin responded with an attack on the parliament building, saving the president. Yeltsin then promoted a new constitution that accentuated presidential authority. If there had been strong political parties in place, Yeltsin would have faced strong pushback. After decades of Soviet rule, however, political groups were just beginning to form and organize.

The United States gave little direct financial assistance to Russia during that difficult period. By 2001, the U.S. had sent only a billion dollars, with about two-thirds of the contribution earmarked for nuclear weapons. The International Monetary Fund (IMF) provided only $22.7 billion to Russia (the U.S.-initiated Marshall Plan’s $13 billion assistance to Europe after World War II represented $135 billion in 2018 dollars).

Jeffrey Sachs, a Harvard economist who promoted shock therapy but also recommended state ownership of Russia’s natural resources and a strong safety net to assist the Russian people, lamented the failure.  “I feel that it was tragic how we in the West, with our power and wealth, failed to contribute to more satisfactory change,” Sachs told PBS in 2000. “We could barely find a penny in [the United States] to help.” Tremendous opportunities had been lost, he concluded.

Political conditions made it difficult to mobilize public support for intervention in Russia’s affairs. In the Nineties, Europeans were fixated on the unification of Germany and the sudden appearance of newly configured nations after the disintegration of the U.S.S.R. In the U.S., President George H. W. Bush’s administration focused on military operations in Iraq. Then a troubling recession complicated Bush’s prospects for reelection. President Bill Clinton followed Bush and was soon preoccupied with challenges from Newt Gingrich and a resurgent Republican Party.

Americans had diminished interest in global affairs after the Cold War ended. They wanted to enjoy a “peace dividend,” financial benefits related to the United States’ new position as the world’s only remaining superpower. Affairs at home eclipsed interest in conditions abroad. When President Bill Clinton and Republican Bob Dole debated in 1996, almost all questions submitted to the candidates related to domestic topics.

A robust European and American effort to aid Russia in the Nineties would have been a heavy lift, but a look back at history suggests the value of greater engagement. After the end of the Second World War, the United States helped the defeated nations modernize. The Marshall Plan brought substantial foreign aid to Germany and other countries in Western Europe. Under General Douglas MacArthur’s leadership, the U.S. promoted democratic governance in Japan, development of a market economy, and disarmament. U.S. intervention in these countries proved extraordinarily successful. By the 1950s, Germany and Japan appeared democratic, prosperous, and peaceful.

In some respects, creating a successful system of free enterprise was more difficult in Russia than in postwar Germany and Japan. Germany had long been engaged in capitalist enterprise and Japan had a system of large business conglomerates (zaibatsu) before World War II. Russia lacked fundamental commercial traditions, practices, and rules.

The threat of communism motivated America’s post-World War II efforts to promote economic prosperity and democratic reforms in the defeated nations. Americans and their allies worried the Germans and Japanese might find totalitarianism appealing if a decade of crises followed the war’s conclusion. A later generation of leaders should have sensed potential for trouble if conditions in Russia became chaotic after communism’s demise.

Russia was ill-prepared for a transition toward democracy and free enterprise. Conditions deteriorated quickly, leaving millions of people desperate. By the end of the Nineties, many Russians hoped a strong-minded authoritarian figure could establish law, order, and progress. Some thought that leader arrived when Boris Yeltsin elevated a former KGB agent at the Kremlin. Vladimir Putin’s ascendancy was not inevitable. Putin might have remained in obscurity if there had been a more successful Russian transformation out of dictatorship and communism.

America’s political situation in the Nineties did not favor robust intervention resembling the vast assistance to Germany and Japan after World War II. But U.S. leaders could have provided better advice and done more to help the Russians create and implement effective reforms. Jeffrey Sachs, the Harvard economist who participated in early efforts to assist Russia, understood the tragedy. He acknowledged in 2000, “We could have done a great deal more. We chose not to do it.”

The consequences of that lost opportunity are strikingly evident today.