How Lincoln and Douglass Joined Forces for Freedom

Jonathan W. White is professor of American Studies at Christopher Newport University and author of A House Built By Slaves: African American Visitors to the Lincoln White House (2022) and To Address You As My Friend: African Americans’ Letters to Abraham Lincoln (2021). 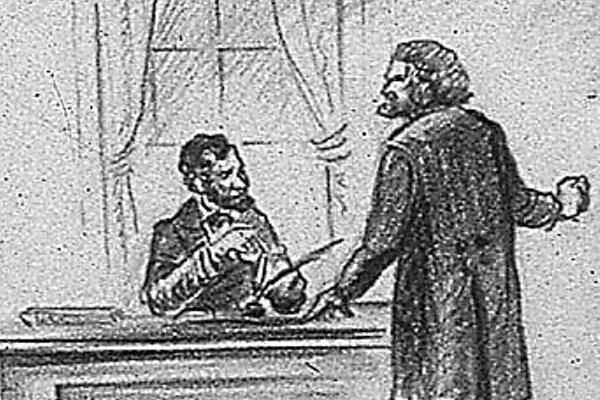 Many of Abraham Lincoln’s modern critics believe that Lincoln’s heart was not really in emancipation—that he was, at best, a “reluctant emancipator,” or, at worst, a “white supremacist” who was “forced” to free the slaves. This view is rooted, in part, in the perception that Lincoln was slow to adopt an emancipation policy during the Civil War, and that he only freed the slaves as a “military necessity” to save the Union, rather than as a moral good.

Political realities and constitutional limitations shaped Lincoln’s thinking on this issue. He understood that if he tried to free the slaves too early in the war, he would have alienated the slaveholding border states, which would have meant “los[ing] the whole game.” So he waited to issue his Emancipation Proclamation until after he had secured control of the border states. And while it is true that he justified the Emancipation Proclamation as a “military necessity” that was “indispensable” for saving the Union, his heart was fully in the decision. He once remarked, “I am naturally anti-slavery. If slavery is not wrong, nothing is wrong. I can not remember when I did not so think, and feel.”

Lincoln’s deep-seated hatred of slavery can be seen in a little-known moment that took place in the run up to the presidential election of 1864. During that summer, the Union war effort was going very badly. With Ulysses S. Grant bogged down outside of Petersburg, Virginia, and William T. Sherman stuck outside of Atlanta, morale in the North was cratering. Lincoln became convinced that he would lose his bid for reelection. Yet at this critical moment, with so many pressures upon him, Lincoln’s concerns were with the fate of those who were still held in bondage in the Confederacy.

In August 1864, Lincoln summoned Frederick Douglass to the White House to formulate a plan to free as many slaves as possible before the next inauguration in March 1865. Lincoln rightly suspected that if he was not reelected, the next president would rescind the Emancipation Proclamation. “Douglass, I hate slavery as much as you do, and I want to see it abolished altogether,” Lincoln told the famous abolitionist.

“The slaves are not coming so rapidly and so numerously to us as I had hoped,” Lincoln explained. Douglass replied that “slaveholders knew how to keep such things from their slaves” so that very few probably were even aware of Lincoln’s edict. “Well,” replied Lincoln, “I want you to set about devising some means of making them acquainted with it, and for bringing them into our lines.” Douglass then sketched out a plan to send “bands of scouts” into the South to tell the slaves to seek freedom now, while they still could, before a Democrat took his seat in the White House.

Fortunately, nothing had to come of this daring strategy. In early September, Sherman captured Atlanta. That victory, coupled with several others, caused northern morale to buoy, and Lincoln won a massive electoral victory in November. But Douglass’s meeting at the White House is still tremendously important, for it reveals how Lincoln’s heart and soul were fully invested in the destruction of human bondage. Freeing the slaves in this way had nothing to do with winning the war, or saving the Union, or “military necessity.” It had everything to do with making freedom as broad and as permanent as possible.

Douglass recognized the significance of this moment. For much of the war, he had been critical of Lincoln, calling him the abolitionist movement’s “most powerful enemy” and “an excellent slave hound” who had “complete loyalty to slavery.” Now, after meeting with the president in August 1864, Douglass had a new understanding of Lincoln’s profound commitment to freedom. “What he said on this day showed a deeper moral conviction against slavery than I had ever seen before in anything spoken or written by him,” Douglass later wrote.

Douglass appreciated how Lincoln welcomed him to the White House and treated him as an equal. “In all my interviews with Mr. Lincoln I was impressed with his entire freedom from popular prejudice against the colored race,” he later said. “He was the first great man that I talked with in the United States freely, who in no single instance reminded me of the difference between himself and myself, of the difference of color.” For the first time in U.S. history, Douglass encountered a president who cared about the interests of the enslaved. And in Douglass, Lincoln found a trustworthy advisor.