Nayan Shah is Professor of American Studies and Ethnicity and History in the USC Dornsife College of Letters, Arts and Sciences. 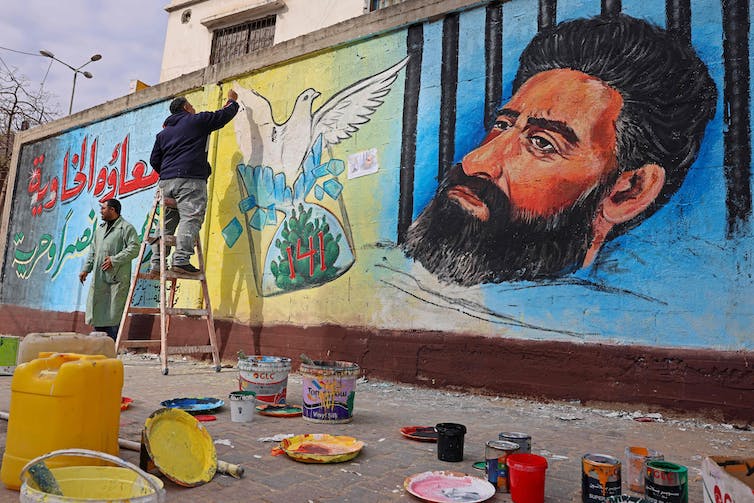 In the coming weeks, Israel is slated to free Palestinian detainee Hisham Abu Hawash, a 40-year-old construction worker, who has been held by Israeli military authorities since October 2020 without charge or trial. Israel agreed to release him after Abu Hawash agreed to end a 141-day hunger strike he had carried out while imprisoned.

He was hospitalized but refused medical treatment. After days of protests by Palestinians calling for his release, and mounting fears in Israel of widespread unrest if he died in custody, the Israeli government yielded.

His expected release comes almost a year after another high-profile prisoner began a hunger strike. In March 2021, imprisoned Russian political leader Alexei Navalny began refusing food to demand that his own physicians – rather than prison doctors – treat various health conditions that potentially stemmed from a failed Russian assassination attempt against him.

Outraged by the injustice of his incarceration, demonstrators took to the streets across Russia and clashed with police, resulting in arrests of around 1,500. After 24 days, some of which he spent in hospitals, Russian officials allowed Navalny’s doctors to treat him. He then ended the strike and returned to his prison cell.

Neither man is yet free from prison, but their actions show the power of hunger strikes to galvanize public attention and promote specific political goals. My book “Refusal to Eat: A Century of Prison Hunger Strikes” presents a wide-ranging analysis of hunger striking as a tactic and explains why this practice has such visceral power as a tool of radical and revolutionary action.

The power of the hunger strike lies in its utter simplicity. Anyone can choose to forego eating, even when living under extremely restricted conditions. It has happened in the prisons of apartheid South Africa, Israeli prisons holding Palestinians and the U.S. detention camp at Guantánamo Bay, Cuba.

Many captors are particularly afraid that a hunger-striking prisoner will die in their custody.

In 1981, Bobby Sands and nine other members of the Irish nationalist paramilitary movement died after months of hunger striking in a British prison in Northern Ireland.

Their hunger strike was part of a wider prison protest against British rule that took place during the Troubles, a period of sectarian unrest that saw running street battles between largely Protestant pro-British loyalists and mainly Catholic Irish republicans.

During the strike, Sands gained so much public support that he was elected a member of the British Parliament while still behind bars. When he starved to death a month later, he became a martyr for the cause of Irish nationalism and independence from Britain.

In 2005, when hundreds of Guantanamo prisoners went on hunger strike to protest their indefinite detention without charge, a key fear among U.S. officials was that one of them would die.

“The worst case would be to have someone go from zero to hero. We don’t want a Bobby Sands,” one U.S. official told a reporter. So the U.S. began force-feeding the inmates, which overwhelmed the camp’s medical system, requiring new equipment and emergency recruitment of nursing personnel. 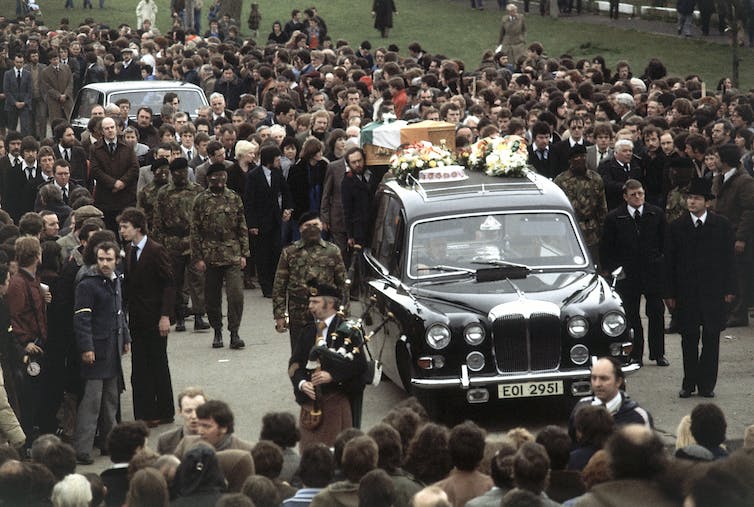 The death of hunger striker Bobby Sands in 1981 drew crowds to his funeral and sparked protests against British rule in Northern Ireland. AP Photo/Robert Dear

Over time, hunger strikers physically weaken and become more dependent on others for their survival. But in my research, I have seen them strengthen their messages against oppression, and their determination to be heard.

Most of these prisoners don’t want to die. “In order for a hunger strike to succeed, the outside world must learn of it. Otherwise, prisoners will simply starve themselves to death and no one will know,” wrote former political prisoner Nelson Mandela, who participated in hunger strikes while in prison and later became president of South Africa.

Rather, their goal is to draw public sympathy for the cause and pressure authorities to change their policies or actions. Hunger strikers’ memoirs, as well as medical reports, reveal that their hunger pangs subside after a few days, making them more able to withstand pressure from guards, fellow prisoners, physicians and even their family members to resume eating. It can often take weeks, and even months, for grave deterioration to set in – much less death. That time is an opportunity for the striker and his or her allies to leverage the strike to achieve their goals.

In the early 20th century, British and American suffragists were the first to use hunger strikers’ stories in the media, focusing on the feelings and bodily distress of hunger striking, to show how determined and important their protest was.

After hunger striking in 1917, Alice Paul was released from prison and campaigned to win votes for women’s suffrage in the U.S. Senate. She also inspired women’s suffrage activists across the country to influence their state legislators to ratify the 19th Amendment to the U.S. Constitution, which gave women the right to vote.

When prisoners go on a hunger strike, their experience of self-starvation focuses attention on prison conditions, or the reasons they are being detained. Prison authorities often try to limit information about hunger strikes, denying they are happening at all, minimizing the number of strikers and the duration of their protest, and even claiming that prisoners are eating surreptitiously by consuming food hidden in their cells.

When media reports thrust the experience of hunger striking into the public eye, the news can pressure the government to curb abusive treatment, improve conditions in the short term, ease communication or grant prisoner release. Strikers’ allies and supporters communicate the injustices through demonstrations, picketing, placards and banners. They also express solidarity with the strikers experiences through public sympathy fasts.

Governments fear that public protests can escalate into political upheaval and insurrection. Protests shift the terms of public debate away from the state’s justifications for imprisonment and secrecy, and toward concerns for justice. 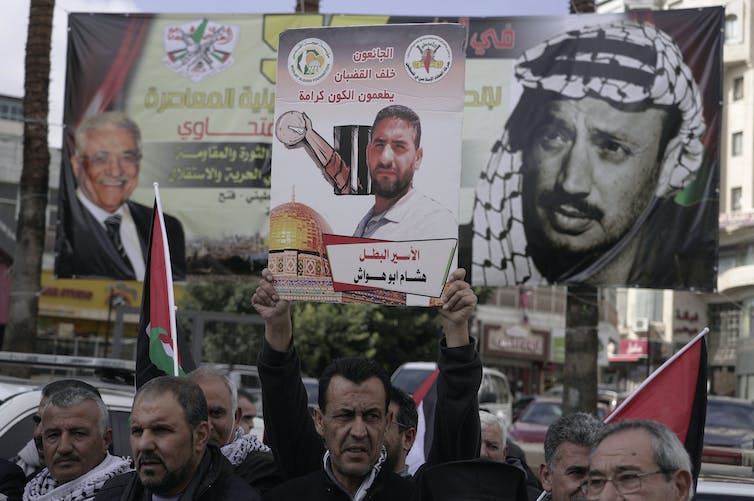 Palestinians demonstrate in solidarity with hunger striker Hisham Abu Hawash, who is pictured on the center poster. AP Photo/Majdi Mohammed

Most hunger strikers survive – and often remain in prison. That is what Mandela and his fellow inmates did in 1966, and what Navalny did in Russia in 2021.

Even before his strike, Navalny was famous as an outspoken opponent of Russian President Vladimir Putin. Navalny barely survived an assassination attempt with life-saving treatment in Germany, and was arrested upon his return to Russia. His strike continued his years-long effort to call attention to abuses of power in the Russian government.

Abu Hawash, by contrast, was not widely known beyond his own community until his hunger strike was publicized globally. But he was not alone.

In October 2021, 250 Palestinian detainees went on hunger strike to protest their removal to solitary confinement. Some prisoners refused food for short periods, from 48 hours to five days.

But others struck for longer, heightening alarm among guards, physicians and family members – as well as political leaders. Over the years, Palestinian detainees’ hunger strikes have triggered street protests in West Bank and Gaza, and focused worldwide media attention on Israel’s use of detention without charge or trial.

In November 2021, several long-term strikers were hospitalized and released from custody after medical treatment. Abu Hawash’s moment is approaching.