The 20th Century's Lessons for the Climate Crisis? Pragmatism, Unity, and Urgency 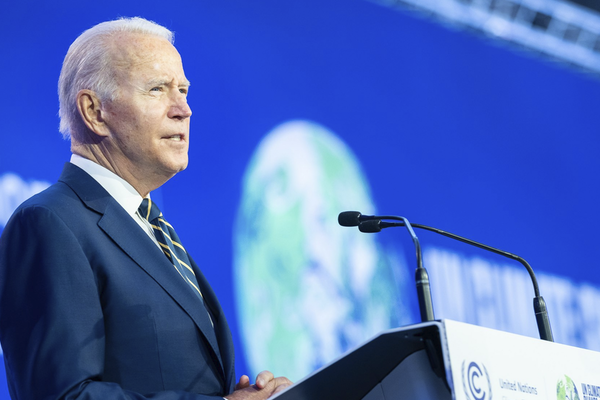 The effects of climate change sweep across our planet. Scorching heat, wildfires, flooding, and intense hurricanes in the summer of 2021 were recent signs of the wartime-like horrors that may well follow. In August 2021 a new report (of almost 4,000 pages, with 234 authors) from the United Nations Intergovernmental Panel on Climate Change (IPCC) indicated that fires, floods, and other frightful occurrences would only intensify unless we reduce--greatly reduce--greenhouse gas emissions. Another August 2021 report, “State of the Climate in 2020,” was just as dire.

A few months later on November 1, 2021 at the COP26 climate summit in Glasgow, U.S. President Joe Biden warned: “To state the obvious, we meet with the eyes of history upon us and the profound questions before us. It’s simple, will we act, will we do what is necessary? Will we seize the enormous opportunity before us or will we condemn future generations to suffer? . . . Climate change is already ravaging the world. . . . It’s not a hypothetical threat. It’s destroying people’s lives and livelihoods and doing it every single day.”

At the same summit, UN secretary general António Guterres said: “It’s time to say ‘enough’ . . . .  Enough of killing ourselves with carbon. . . . We are digging our own graves. Our planet is changing before our eyes—from the ocean depths to mountain tops; from melting glaciers to relentless extreme weather events.”

Yet, “many world leaders expressed disappointment with the final [Glasgow] agreement,” indicating it was insufficient. Simply put, not enough people are alarmed. In the United States, extreme political polarization acts as a severe drag on needed climate-change actions. A summer 2020 U. S. poll indicated that most voters, especially Republicans, considered numerous other issues more important. A year later most Republicans--and the oil, gas, and coal companies that contribute to their politicians--opposed measures that would seriously curb emissions. If willing to admit that climate change might be a serious future problem, many thought optimistically that we’ll come up with new technology to fix climate-change concerns.

Another central problem is that even those who consider climate change important too easily get distracted.  The coronavirus, Afghanistan, voting rights, Trump’s latest antics, legislative battles over President Biden’s proposals, the possible overturning of Roe v. Wade, who our new Supreme Court justice will be--any one of these, for example, can distract us from lasering in on climate change and then keeping it as our central focus.

More than a dozen years ago president-elect Obama wrote, “Few challenges facing America--and the world--are more urgent than combating climate change.” In 2021 he reiterated his concern. When asked on what issue will people judge us most harshly for in 100 years, he replied: “Well, if we don’t get a handle on climate change, then if there’s anybody around to judge us, they’ll judge us pretty harshly on it, because the data is here. We know it. And we have the tools to make real progress with it.”

Thus, at this crucial time we historians may ask ourselves, “Does our knowledge of history provide any help in awakening and uniting people to fight the great danger we face?

Two years ago on this site I asked, “Are Historians Doing Enough to Address Climate Change?” I quoted Ohio State historian Sam White, who wrote that few historians “examine the historical factors and decisions that led us to fossil-fuel dependence, climate change denial, and political and diplomatic gridlock on climate policy, with an eye to identifying changes that might bring us out of our current impasse.”

The essay that follows attempts to contribute to overcoming our “impasse” by examining a few instances of how and why nations failed to act against earlier great threats and what actions leaders finally took to mobilize their citizens. Two examples that immediately jump to mind are the initial failures to deal with the causes and early results of the Great Depression, which began in late 1929, and then, soon afterward, the failure of nations in the 1930s to confront the growing dangers of Nazism. When these mortal threats were finally confronted, the leadership of Franklin Roosevelt (FDR) and Winston Churchill proved crucial. (Although the role of the USSR in defeating Nazi Germany was crucial, Stalin first enabled Hitler by signing the Nazi-Soviet Pact of 1939.)

By late 1932, one of every four U. S. workers was unemployed. In Germany, the ratio was even higher, and helped lead to Adolf Hitler’s coming to power in early 1933.  Most of the rest of the world also suffered from the Depression; and as historian Niall Ferguson wrote, it “was an economic catastrophe unmatched before or since.” The human suffering and long-range damage it caused, including making a second world war more probable, are incalculable.

The U. S. president when the Depression began was Republican Herbert Hoover. Although Kenneth Whyte’s 2017 book Hoover has provided a corrective to viewing his subject in a completely negative light, there still seems little doubt that he did not handle the Depression well. Robert Dallek’s biography of Franklin Roosevelt (also 2017) tells us that by late 1932, Hoover “became the butt of vaudeville comedians.”   In the November 1932 election Roosevelt swept the Electoral College vote, 472 to 59. Hoover’s own words at the end of his term indicate how bad things had gotten: a “steadily degenerating confidence in the future which had reached the height of general alarm. . . . We are in a pitiful position.”

Part of Hoover’s failure stemmed from his overemphasis on “American Individualism,” the title of a book he wrote in 1922, and on his inflexibility. In 1932 he stated that “Federal aid would be a disservice to the unemployed.” In contrast, FDR was more open-minded, more flexible. In mid-1932 he expressed the belief that our individualism needs to be balanced by more social planning, but also that our “country demands bold, persistent experimentation. It is common sense to take a method and try it: If it fails, admit it frankly and try another.”

Even if Hoover had been a better leader, however, he still would have had to overcome deep divisions within our country. Dallek again provides some background.

There “was the deep cultural divide between urban and rural Americans, or modernists and fundamentalists.” Moreover, “rural folks who aggressively supported ideas and traditions largely in harmony with their established way of life” felt threatened by the growing dominance of the big cities. Many of these same folks especially distrusted all the southern and eastern European immigrants who had come to the cities before the 1924 National Origins Act discriminated against them and Asians. “The belief that these groups could never be turned into citizens who fully accepted Anglo-Saxon economic and political traditions” was widespread.

Dallek’s conclusion? “If Roosevelt was to find the means to overcome the nation’s crisis, it would have to rest on shared support from every region and every ethnic, religious, and racial group.” As with today’s climate crisis, more national unity was needed. The November 1932 vote indicated our nation was by then willing to give FDR a chance to try something new.

In his The Coming of the New Deal, 1933-1935, historian Arthur M. Schlesinger Jr. quotes journalist Walter Lippmann, who described the contrast from Hoover’s last days to FDR’s first hundred days: “At the end of February we were a congeries of disorderly panic-stricken mobs and factions. In the hundred days from March to June we became again an organized nation confident of our power to provide for our own security and to control our own destiny.”

In an introduction to a new 2003 edition of his book, Schlesinger wrote that “under the pressure of national crisis, FDR came into his own. . . . He was more interested in creativity than consensus. He did not mind competition and rivalry within his administration; he rather encouraged it.” As Schlesinger explained in his original text, “Competition in government . . . . adequately controlled . . . could mean exceptional creativity. One consequence under the New Deal. . . . was a constant infusion of vitality and ideas.” Dallek writes of the “experimental temperament of the New Deal” and refers to FDR as “ever the pragmatist.”

In confronting the Nazi threat beginning in 1933, FDR and other anti-Nazi leaders confronted similar difficulties to those that faced the USA and other nations in the early years of the Depression, especially inadequate unity, pragmatism, and creativity.

The first deficiency was twofold--lack of unity among nations and among political groupings within nations. In opposing Hitler a basic ideological divide existed between the Soviet Union and the Western democracies (especially the USA, Great Britain, and France). Not until Germany invaded the USSR in June of 1941 did necessity solidify a European anti-Nazi coalition. And, despite FDR’s attempts to help the Churchill-led Great Britain in 1940 and 1941, not until the Japanese attack on Pearl Harbor in December 1941 and the subsequent German declaration of war against the USA did we enter WWII against Germany--more than two years after Britain and France had declared war.

Within nations, political and ideological differences also prevented a unified will in opposing Hitler. In the USA, isolationists especially prevented FDR from doing more to help European countries bullied and eventually attacked by Germany. In European countries opposed to Hitler, many people feared and hated the USSR and communism as much or more than the German Nazis.

Only in mid and late 1941, after the German attack on the USSR and then the subsequent Japanese bombing of Pearl Harbor, did German and Japanese aggression create conditions necessary for a Grand Alliance of the USA, Great Britain, and the USSR to emerge under the leadership of FDR, Churchill, and Stalin. (Although necessity maintained this alliance for almost four years, the vast ideological and other divisions between the USSR and the western democracies ended it as soon as the common enemies were defeated.)

Today in the face of a climate crisis as deadly and threatening as the Great Depression or Nazi Germany, global forces once again need to unify against a deadly threat. Only it is even more complex, more multidimensional, than either the Depression or Nazism.

The complexity of it is strongly suggested in Kim Stanley Robinson’s The Ministry for the Future: A Novel (2020). About the author, leading environmentalist Bill McKibben wrote that he “is an essential authority for our time and place.” New York Times columnist Ezra Klein labeled the novel “The Most Important Book I’ve Read This Year.” And former President Obama listed it as one of his favorite books of 2020.

Among the many problems, issues, and complexities Robinson deals with in are direct effects of climate change, like a deadly heat wave that kills 20 million people in India; various means of dealing with the effects, like “staining the open Arctic Ocean yellow, to keep sunlight from penetrating deep into the water and cooking them all,” and creating new monetary instruments like “carbon coins”; people’s social and political reactions to climate-change consequences, e.g., strikes and terrorism; and capitalist resistance and various biases and non-rational mindsets to many climate-change solutions.

To successfully deal with all such consequences we (people and nations) will need not only to unify but also display the type of openness and pragmatism that FDR demonstrated in dealing with the Depression in the 1930s.

Whether we will--or instead squabble, bicker, and attack each other--remains an open question.