Journalist Mark Holan writes about Irish history and contemporary issues at markholan.org. His story on Irish leader Eamon de Valera is featured in the Winter 2022 issue of Alabama Heritage magazine. 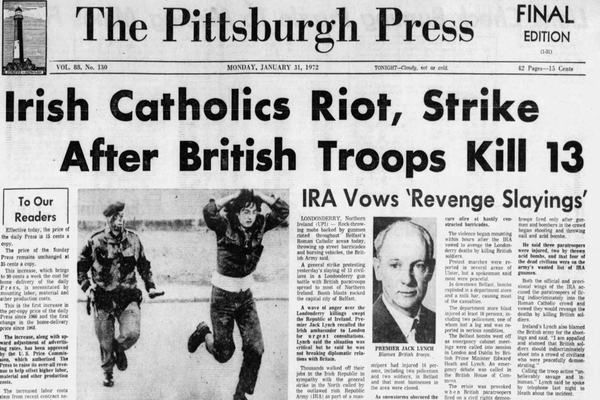 Michael Kelly carried a Mars candy bar in his pocket on Jan. 30, 1972, as British troops opened fire on unarmed protesters in Derry, Northern Ireland. The sweet-toothed 17-year-old was among 13 people killed in this iteration of “Bloody Sunday,” distinct from similarly designated events in Ireland and elsewhere.

In October 2001, John Kelly, the victim’s brother, told me the candy bar remained in evidence held by the British government. We met at the Bloody Sunday Trust, established a few years earlier to support victims’ families, promote human rights, and foster conflict resolution. The blood-stained “Civil Rights Association” banner carried by marchers in 1972 hung on a wall.

At the Guildhall across the street, I attended the Saville Inquiry, the British government’s second attempt to untangle what happened; the first probe was widely considered a pro-military whitewash. As I strained to understand the witnesses’ distinctive dialects, maps and photos of Derry streetscapes three decades earlier flashed on a large screen.

The marchers were protesting British internment without trial. They also opposed decades of housing and job discrimination against the Catholic minority in Northern Ireland by its Protestant majority business and political interests. Then, as now, Catholics generally supported the reunification of Ireland, while most Protestants insisted on remaining part of Britain.

“We will be here as long as we need to be,” Kelly told me. “What’s a couple more years, since we have waited nearly 30 to hopefully get truth and justice?”

When the Saville report was finally released in 2010, it found the Derry marchers had posed no threat to the troops. Their actions were "both unjustified and unjustifiable … what happened should never, ever have happened,” then British Prime Minister David Cameron acknowledged.

My 2001 travel to Derry came as part of a journalism fellowship, but the visit held personal as well as professional significance. In 1972 I was a 12-year-old boy in Pittsburgh, beguiled by the brogues of my County Kerry  immigrant relations. Ireland was the misty, green isle of shamrocks and St. Patrick, 3,400 miles across the Atlantic.

Bloody Sunday changed my childish view. This key event of the Troubles sparked a lifelong interest in Irish history and contemporary life. As I listened to my relations react in horror, I read the now familiar reporting:

The Vietnam War and civil unrest in America had diverted my limited pre-teen news attention from earlier events in Northern Ireland. But I soon became engrossed in acronyms such as IRA and UDA, SDLP and DUP; distinguished the use of Derry and Londonderry; studied the map of the island’s 1921 partition, six counties from 26 counties; and familiarized myself with a growing cast of newsmakers as diverse as Bernadette Devlin and Ian Paisley.

My relations imparted a moderate Irish nationalism with their devout Irish Catholicism. I started a clip file of Irish developments datelined from Belfast, Dublin, London, and Washington, D.C. as the conflict extended through the 1970s, 1980s, and into the 1990s. The death toll grew to more than 3,500, including many children aged 12 and younger. By April 1998, I monitored the progress of the Good Friday Agreement at an “internet café” because the newspaper where I worked wasn’t online. Today, I access Irish media—words and video—on my smart phone and follow the newsmakers on Twitter.

Back in 2001, I drove from Derry to Omagh, site of an Irish republican car bombing that killed 29 Saturday afternoon shoppers in 1998. A local newspaper publisher told me some mourners carried caskets weighted with sandbags because they didn’t have bodies to bury. I walked to a memorial near the blast site, suddenly transformed to reflect the month-old 9/11 attacks in America. No country is free of terror and violence.

Diverted from Belfast in 2001, over eight subsequent trips I’ve explored the city’s republican Falls and loyalist Shankill neighborhoods, the latter on a mid-July afternoon as bonfires smoldered from the annual remembrance of the 1690 victory of a Protestant king over a Catholic monarch. Today, more than 100 so-called “peace walls” still separate sectarian neighborhoods, more than 20 years after the accord that ended the worst violence of the Troubles.

Brexit, Britain’s withdrawal from the European Union, has created new threats to the peace because of how it treats the Northern Ireland border with EU-member Republic of Ireland, and Northern Ireland differently than the rest of the U.K. The nationalist Sinn Fein party, which supports Irish reunification, for the first time could win Assembly elections scheduled for May, a fright to unionists.

For years I’ve researched and written about the events of Ireland’s "decade of centenaries," the early 20th century revolutionary period that includes the Bloody Sunday of November 1920 in Dublin. Marking the 50th anniversary of Bloody Sunday in Derry feels different, a more intimate observation of a history which unfolded within my lifetime, yet still hardly comparable to those who lived it firsthand.