A Ten Year Old's Witness to the Liberation of Auschwitz

Bernice Lerner, Ed.D., is the author of All the Horrors of War: A Jewish Girl, a British Doctor, and the Liberation of Bergen-Belsen and The Triumph of Wounded Souls: Seven Holocaust Survivors’ Lives. 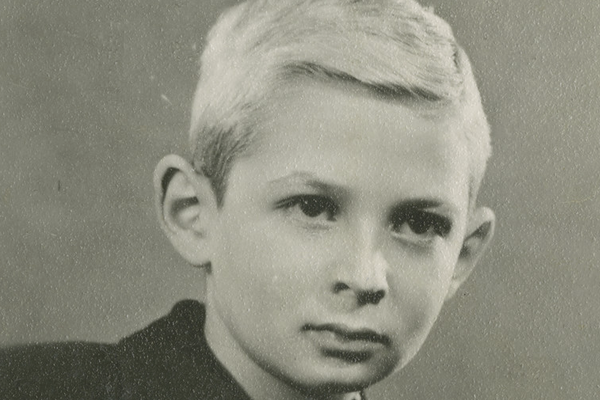 Jerzy (George) Ogurek, c. 1943-1944. This photo shows the boy's hair dyed blond to disguise his Jewishness as his family fled from Poland to Budapest (he would be known later in life as George Zimmerman)

By the time Red Army soldiers entered Auschwitz on January 27, 1945, ten-year-old Jerzy (George) Ogurek had survived three months in the death camp. He defied odds—almost all of the 230,000 children deported there were murdered immediately. Suffering from hunger and effects of scarlet fever, wearing oversized pants and shoes—stuffed with whatever he could find to keep himself warm—he witnessed the momentous event. Following a loud explosion, two Russian soldiers, dressed in white to camouflage themselves against the snow, appeared—each with a rifle on one arm and a huge sausage on the other. 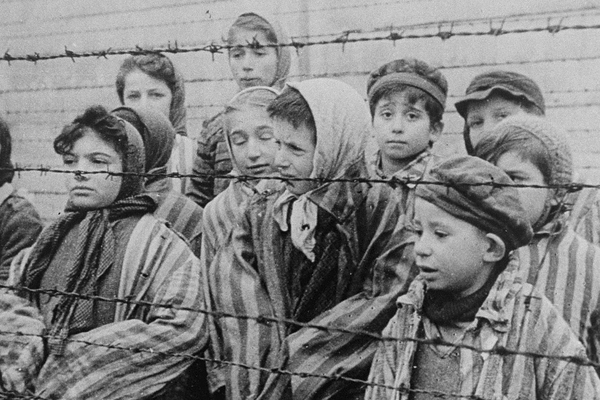 Child survivors at Auschwitz photographed by the Red Army, 1945

By that point, George was adept at playing by new rules. In 1943, during an aktion in Sosnowiec’s ghetto, he had hidden in a storage room between sheets of leather. When escaping with his parents and grandparents from the ghetto, he had crouched quietly beneath hay that had been piled atop a wagon’s floor.

George’s parents had decided when and to where they must run. Bribing guards and guides, and with help from various networks, they traveled from Poland to Slovakia to Hungary—then back to Slovakia—evading Nazi collaborators and murderers. George, with bleached blond hair, pretending to be Catholic, could recite the Hail Mary in German, Polish, Hungarian, or Slovak.

In October 1944, smugglers hired to help them cross the border from Slovakia to Hungary betrayed the family. At Sered, a labor and transit camp, they were identified as Jews and sent to Auschwitz II (Birkenau).

Before their arrival, a transport of two thousand men, women, and children from Sered had been gassed. Directed to shower, George’s parents were sure they would be killed. They emerged with shaven heads and prisoners’ clothes. When it was George’s turn to have a number tattooed on his arm, his father implored the engraver to make the digits small.

The Nazis clubbed to death several people from George’s transport group. Kapos randomly pulled several individuals from the rows of inmates and beat them without the slightest pretense or justification. This place had no rules.

The SS directed the men and women into two separate groups. George went with the men, then to a barracks for children, where eight shared a small cubicle. During Zehl Appel (roll call), everyone had to stand for hours in the bitter cold. After working all day, George’s father and grandfather visited him in the evening. Once, his father brought him lard—it was stolen from George within hours.

Falling ill, George was transferred to the medical block. Every day, he counted the corpses in front of the barracks. He watched people eat potato peels. He never saw his father and grandfather again.

In early January, the Russians bombarded area targets. In mid-January, the SS evacuated 58,000 inmates by foot or on freight trains. George foraged through storehouses of clothing and food. Periodically, SS officers returned to the camp and shot people.

On January 20, the Nazis blew up two crematoria. Further destruction of incriminating evidence followed. SS units ordered the thousands of remaining inmates—the weak and sick, including children and Russian prisoners of war, out of the barracks. Officers asked, “Who thinks they will not be able to walk ten kilometers tonight?” Those who stepped out of line were taken behind a barrack and shot.

At that moment George imagined what it would feel like to die. He decided that he was prepared to meet his fate, be it life or death. Death was worse than pain and fear, but he was reconciled to even that possibility.

At that point, George was not alone. His father’s brother, whom he had never met, had recognized him when they were both in the medical block. Together, among one thousand inmates, they trudged out of Birkenau. The columns of war weary had not gone far when their guards stopped them. They waited in the snow for an hour, after which the guards got into trucks and disappeared. The leaderless group headed back to Auschwitz I, which had brick buildings as opposed to Birkenau’s wood barracks. As they walked, they ducked their heads to avoid shells and bullets.

After the liberation, George and his uncle did not wait for the arrival of more Russian troops to come and take charge of the situation. With cigarettes—a wartime currency—George’s uncle paid a driver to take them to Krakow. On the truck’s flatbed, George felt the weight of a large Russian soldier’s head resting upon his legs. He chose to tolerate the pain and discomfort rather than wake the sleeping giant.

Fifty years later, I met with George Zimmerman, who over a 35-year career served as a professor, researcher, and administrator of Boston University’s physics department. No one with whom he worked knew what George had experienced as a child.