Biden's Virtual Summit Is Only the Beginning of Securing Democracy 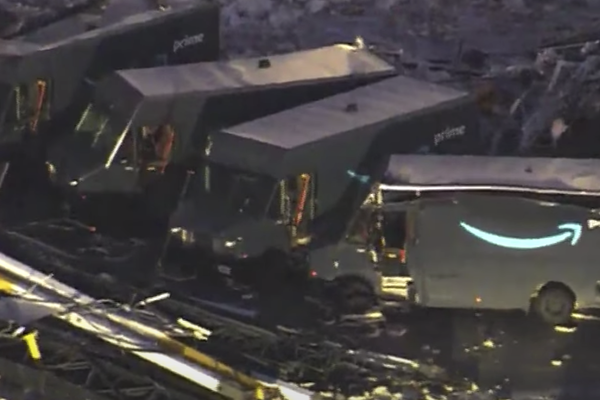 Delivery trucks damaged at Amazon's Edwardsville, IL facility which was destroyed by a tornado on December 10.

Six workers were killed by the collapse of walls and part of the roof of the warehouse.

There are good things that can be said for President Biden’s virtual “Summit for Democracy,” and the best is that there should more of it.  One might well quarrel about some of the countries that made the cut.  The Democratic Republic of Congo fools no one by its name, Iraq and Angola fail most tests, while Bolsonaro’s Brazil and Dutarte’s Philippines have made a mockery of their nation’s better political traditions, even as a comparatively fair-performing Bolivia deserved an invitation.  Still, the general thrust of the meeting is right and well-timed.  The world needs more democracies, the meeting suggested, and the democracies themselves—very much including the United States—need to become more democratic.

The invitation list alone sends an unspoken rebuke to authoritarian superpowers China and Russia, while western ‘allies’ like Turkey and Hungary are duly reminded of their current fall from grace.  Nor, thankfully, is the roster meant as an Honor Roll of the Elect(ed).  Rather the agenda usefully focuses on what should be protected–and what improved–across a sea of world trouble spots.  At a Tuesday pre-summit event focused on the role of labor unions, for example, U.S. Secretary of Labor Marty Walsh unveiled M-POWER, a new $120 million dollar investment to strengthen the bargaining power of low-wage workers worldwide, an attempt to stem abuses that, as teacher union leader Randi Weingarten described, now stretch “from Bangkok to Bessemer.”

Yet, if the summit’s impact is not to be merely symbolic and rhetorical, the Administration will have to think more carefully about what it means to adopt a democratic agenda in today’s world.  Preoccupied with real security threats and equipped with the world’s most potent military machine—a situation likely further enhanced by congressional largesse in the current defense funding bill—the watchword of U.S. foreign policy for years has been crisis management rather than coordinated planning for political or economic ends.  Even worse, the remedies for economic woes on offer—from the U.S., the E.U., and international agencies like the International Monetary Fund—have abandoned social planning and public sector projects for market-driven growth, in spirit and substance.  The result, exacerbating deep inequalities everywhere and working-class declines in much of the West, has provided fertile ground for nativist backlash and authoritarian rule.

The alternative—and what’s been missing so far—is a pointedly progressive developmental vision, to be cultivated with and alongside democratic partners in specific geopolitical situations.  At the macro level, that means some renegotiation of the original postwar Bretton Woods bargain, that is an international trading order that balances debt relief for the Global South with some designated tariff or surtax for the maintenance of essential industries in more historically advantaged countries. At the pre-summit labor conference, Björn Böhning, Germany’s state secretary for labor and social affairs, pushed delegates to embrace a version of his own country’s “social partnership,” whereby workers’ representatives are formally recognized alongside business and government leaders in jointly addressing issues ranging from Covid to unemployment to the climate crisis.

Regional theaters, moreover, offer no shortage of opportunities to make a tangible ‘democratic’ difference.  A ‘consortium of free inquiry,’ for example, should unite universities in Australia, New Zealand, and Japan with those in India, South Korea, and Taiwan.  In Central America, Biden should extend a long-established bridge of friendship with Mexico and Costa Rica to newly-elected Honduras president Xiomara Castro. Castro, whose husband Manuel Zalaya was ousted by a U.S.-enabled military coup in 2009, represents a chance to re-set regional policy on a social welfarist course away from the corruption of Daniel Ortega’s one-man rule in Nicaragua on the one hand and government by drug syndicate in Guatemala on the other.  Such an alliance is also the humane way to attack the roots of the region’s migrant and refugee crisis.

The futures of ever-fragile African governments hang in a precarious balance—especially with increasing Chinese influence on the continent--although deeper infrastructures of self-government in Ghana, Botswana, and South Africa provide some grounds for democratic optimism.  Most immediately, however, the ‘development’ agenda there must center on a crash vaccination policy.  The best international legacy of the George W. Bush era was his African Aids Relief program:  Biden and his democratic allies should make good on a similar promise.

Today’s Democracy Summit offers President Biden a chance to revive the liberal-democratic impulses that marked America’s best foreign policies after World War II.  FDR’s Good Neighbor Policy, Truman’s Marshall Plan, and Kennedy’s Peace Corps all found ways to mix long-term national self-interest with tangible outreach to democratic allies and solidarity with struggling peoples around the world.  One can think of few equivalent visions marking U.S. foreign policy in recent years.  One point of departure must be to make socio-economic aid and development an equivalent priority to military readiness.  Our democratic friends may prove our own best protection abroad.