Daniel Farber is the Sho Sato Professor of Law at the University of California. He is the author of Contested Ground: Understanding the Limits of Presidential Power, and the earlier Lincoln’s Constitution, which probes the constitutional issues of the Civil War era. 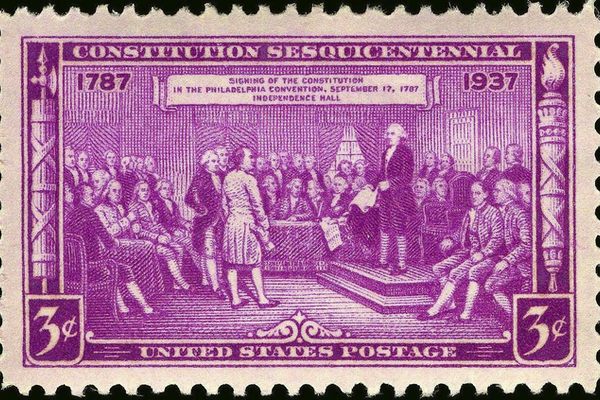 1937 stamp depicts the signing of the Constitution. Engraving after painting by Junius Brutus Stearns, Bureau of Engraving and Printing.

History looms large in arguments about the Constitution these days. But there are widespread misunderstandings of what history tells us about presidential powers.  Some of those myths have formed the basis for Supreme Court opinions; others have been invoked by Presidents defending their own powers. My new book, Contested Ground: Understanding the Limits of Presidential Power, takes on some of this mythology on the way to a more balanced interpretation of the presidential authority.

Here are some of the key myths and what we actually learn from history.

Under this theory, the President can decide unilaterally when to go to war, how to conduct a war, and when to use other tools such as covert operations. This vision of presidential power is based on the first sentence in Article II of the Constitution. The so-called vesting clause reads, “The executive Power shall be vested in a President of the United States of America.” The argument is that the term “executive power” included control over foreign affairs and military force. This argument is based on passages written by thinkers such as John Locke and Montaigne, and on the powers of the English monarchy.

Given widespread revulsion against King George III by Americans, it seems unlikely that the British King was the model for the presidency. If the vesting clause gave the King’s unilateral power to go to war to the President, you would have thought that someone would have at least mentioned that during the extensive debates over the Constitution.  Yet no one, whether friend or foe of the Constitution, ever did so. The first known example of the “vesting clause” argument wasn’t until well after the Constitution had already gone into effect, in an anonymous publication by Alexander Hamilton.

Myth #2:  Presidents can only be impeached for committing criminal offenses.

The Constitution specifies the grounds for impeachment as “high crimes and misdemeanors.” That sounds, to the modern ear, like it means violations of criminal laws rather than abuse of power.  History is pretty clearly to the contrary.

The first impeachments in England were late in the 1300s. The charges involved military failures, corruption, and wasting government money. The phrase “high crimes and misdemeanors” was first used in 1386. It was used again in 1450. In that case, some of the charges against the defendant involved criminal offenses but others did not. Closer to the time of the Framers, there were impeachments for non-criminal conduct such as mismanagement, for subverting the law, for promoting tyrannical government, and for giving bad foreign policy advice.

At the very time the Constitution was being written, the British Parliament was immersed in impeachment proceedings against Warren Hastings. He was charged with abusing his power in managing India on behalf of the British. Edmund Burke, the leading advocate for impeachment, made it clear that no criminal charges were involved. The Framers were well aware of this trial.

Myth #3: The President has unlimited constitutional power to fire any government official.

Most higher-level government officials serve at the pleasure of the president. For well over a century, however, Congress has created agencies like the Federal Communications Commission and the Federal Reserve. The heads of those agencies are appointed by the president with Senate approval, but they can only be removed for misconduct.  Conservatives, including some on the Supreme Court, argue that these agencies are unconstitutional.

The argument that the president has complete power to fire all government officials is primarily based on the “vesting clause,” on the decision of the Framers to have a single chief executive rather than a committee, and on their desire for energetic administration of the government. Strikingly, however, is that even the British monarch didn’t have this power over all officials. Supporters of complete presidential control over the executive branch also cite the debates in Congress about the president’s power to fire officials at the time Congress was establishing the State Department. Congress did ultimately adopt a provision that acknowledged the president’s power to fire the Secretary of State. Recent historical analysis shows, however, that this was a compromise measure and didn’t reflect a consensus about the constitutional issue.

Conservatives, including at least four Supreme Court Justices, argue that Congress must give very specific direction to the President and other officials about issuing government regulations. This would be a radical change from current law. The stakes in this debate are high, given that government agencies such as the CDC and EPA, which are under direct presidential control, now operate under laws giving them broad power to issue rules and regulations.

The argument against these broad laws is that the Constitution vests the legislative power in Congress and that Congress can’t delegate this power to the President or anyone else.  Before and after ratification of the Constitution, however, there were some open-ended delegations of power, such as legislation authorizing territorial governors and legislatures to pass whatever laws they thought appropriate. Congress also gave the President a blank check in regulating commerce with Indian tribes, and it provided a very loose public interest standard for issuing patents.  Most tellingly, Congress gave tax commissioners very broad powers to readjust tax levels. Every now and then, someone would raise an argument about the evils of delegating legislative power, but the argument didn’t seem to have much traction.

Constitutional myths provide the comforting sense that constitutional questions have easy historical answers. But history is never that simple, and if anything often leans against the myths that are all too often embraced by advocates and even by judges.