“Some of Our Superpatriots are Simply Going Crazy”: America's Response to the Fall of France

Michael Neiberg is Professor of History and Chair of War Studies at the US Army War College and the author of Potsdam: The End of World War II and the Remaking of Europe and Dance of the Furies: Europe and the Outbreak of World War I, named one of the five best books about the First World War by the Wall Street Journal. His latest book is When France Fell: The Vichy Crisis and the Fate of the Anglo-American Alliance 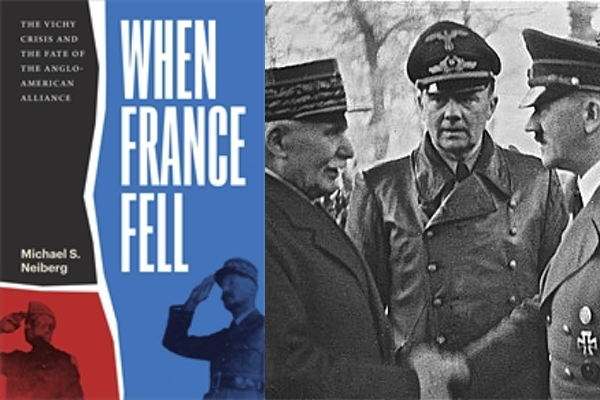 How do societies respond when all of their assumptions about their safety disappear in a flash? Today some Americans have responded by accusing their political adversaries of either intentionally or unintentionally creating the COVID-19 virus, blaming immigrants for the deadly virus’s spread, and turning their anger on Asian-Americans. In 1940 many Americans also looked inward to assign blame for the insecurity they felt after the shocking fall of France.

No American security professional had thought it necessary to plan for the fall of France. All American military planning had begun from the flawed assumption that the French Army and British Navy would more than suffice to keep the latest European crisis far from American shores. As in 1914-1917, they assumed, the United States would have time and choices. But the fall of France rendered all of that thinking terrifyingly obsolete in the span of about six weeks. American military leaders bluntly warned President Roosevelt that if the Germans gained control over the French fleet or the French bases in Senegal and Martinique, they could not guarantee the safety of the American homeland. If, as widely expected, Britain fell next, then the United States would sit completely unprepared to meet a wide variety of new and horrifying military scenarios.

Many of those close to Roosevelt assumed that France could never have fallen so quickly or so completely without the Germans having had inside help. Media reports circulated that, just as in Norway, fifth columnists in France had undermined public will and given the Germans critical military intelligence. Ambassador William Bullitt, in Paris at the time of its fall, told Roosevelt that communists in the French Army had disobeyed orders to fight the oncoming Germans and that other communists had actively helped France’s enemies. “Please, for the sake of the future,” he wrote to Roosevelt from France, “nail every communist or communist sympathizer in our Army, Navy, and Air Force.”

Bullitt was far from alone in panicking. Newspapers reported the fears of government officials (speaking off the record) that there were hundreds, maybe thousands, of German agents in the United States acting as what we might today call sleeper cells, waiting to do Hitler’s bidding. They were living in American communities as smiling elevator operators, helpful butchers, and hard-working office clerks. Thousands more Germans were supposedly operating in Latin America, planning to overthrow pro-American governments in the region. New pro-Nazi client states would then act as bases for German warships and airplanes, the latter possessing enough range to bomb completely undefended southern cities like Miami, Mobile, and New Orleans. Edward G. Robinson’s Confessions of a Nazi Spy, which had flopped at the box office when first released, got a second life amid the new national mood, selling out movie houses and garnering critical praise for shedding light on a critical topic of national security.

As early as May 26, while the French Army was still fighting for its life, Attorney General Robert Jackson warned a cabinet meeting that American vigilantism was already beginning to spiral out of control. The governor of Georgia had announced a sweep for aliens in his state and a bill in Congress proposed banning all non-citizens from work in defense plants. First Lady Eleanor Roosevelt wrote a newspaper column asking, “are we going to be swept away from our traditional attitude toward civil liberties by hysteria about ‘fifth columnists?’” Secretary of the Interior Harold Ickes, who shared her fears, wrote in his diary, “America isn’t going to be any too comfortable a place to live in during the immediate future, and some of us are going to be ashamed at the excesses that will be committed against innocent people.”

Although the president sympathized with Ickes and the First Lady, he was not immune to the fears. In a fireside chat, he warned Americans about fifth columnists, calling them “undiluted poison” and warning that they sought to weaken America “at its very roots.” On May 21, he signed a secret presidential order directing the Justice Department to ignore the Supreme Court’s ban on the use of wiretaps. The case provoking the ban had involved revenue fraud; Roosevelt argued that the Court could not have foreseen the national security need for the wiretaps, thus the ruling should not impede his government’s efforts in the current crisis. He therefore told the Justice Department to “secure information by listening devices direct to the conversation or other communications of persons suspected of subversive activities against the Government of the United States.” He hoped that the department would only use its new authority against aliens, but he did not ban its use against American citizens.

We know now where this paranoia led. After Pearl Harbor, with the threat to the United States more real and the fear much greater than after the fall of France, the government began to target Japanese-Americans. Supreme Court Justice Owen Roberts even alleged (with no evidence to sustain the charge) that Japanese-Americans had helped to guide enemy forces to their targets in Hawaii. In February 1942, Roosevelt signed Executive Order 9066 which began the shameful process of removing Japanese-Americans, including American citizens, from their homes and into internment camps.

Today, Asian-Americans worry that the anger and fear over the spread of the COVID-19 virus had led (and will continue to lead) to discrimination and violence against members of their community. The deadly shooting of six Asian-Americans in Atlanta in March 2021 has made those fears real. In a recent Pew Research study, eight in ten Asian-Americans reported that violence against them is increasing in the United States and one in three fear for their own safety.

We must learn from the past and guard against such paranoia in order to protect the members of our community made vulnerable by unexpected crises. As Ickes noted in his diary in 1940, “some of our superpatriots are simply going crazy.” Ickes hoped that local and national leaders would take action to curb those superpatriots, but Roosevelt’s Executive Order 9066 and the actions of many local leaders, only encouraged them. Seventy years later, the problem remains.