Drug Prohibition and the Political Roots of Cartel Violence in Mexico

Benjamin T. Smith is Professor of Latin American History at the University of Warwick (UK). He is the author of The Dope: The Real History of the Mexican Drug Trade (publishing in the US on August 10, 2021). 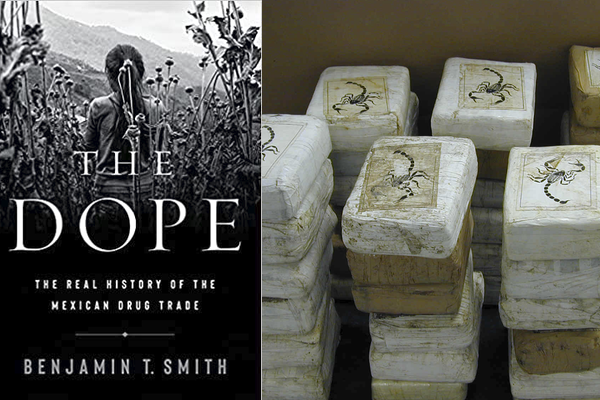 Before I started writing this book, I thought I knew what the Mexican drug trade was about. I had spent over a decade living in, researching, and writing about Mexico. And over that period the beautiful, peaceful country I had first visited in 1999 had turned into a charnel house. And it was the drug cartels that were to blame. Not content with selling Americans a vast amount of marijuana, heroin, and amphetamines, they were now fighting each other for monopoly control of the trade. Such ideas dotted media coverage: what’s going on in Ciudad Juárez – it’s the Sinaloa cartel vs the Juárez cartel. And it percolated down into everyday conversations: who killed Beto, sliced his fingers off and hung him from a bridge? It was the drug cartel. Why? It was drugs.

But the more I researched the history of the drug trade and the war against it, the more I started to question these stories. In fact, nearly a decade of reading declassified spy documents, poring over dusty court records, and interviewing drug agents and traffickers in seedy hotels started to turn these assumptions on their head. These stories are in short, a myth, a set of convenient narratives that the authorities tell us, and we repeat back to ourselves, because they are easy and fit what appears like chaos into a comforting moral binary.

The essence of these stories is as follows. The drug war is a simple conflict between north and south, between white and brown, between noble and well-intentioned cops and a threatening cabal of vicious kingpins, corrupt Mexican politicians, and shadowy, powerful cartels. Traffickers are naturally brutal men; violence is in the “DNA of the trade.” Such myths serve a purpose. They demonize the drug traffickers and cement the narrative of the drug war as a struggle between good and evil. They legitimize official violence. Drug cops carry guns because they must fight well-armed traffickers; they shoot but only when shot at.

These myths have been around for over a century. They emerged in the early twentieth century when the United States first prohibited drugs and Mexico become its northern neighbor’s go-to supplier. Recently, they have become cemented in popular culture through TV shows like Breaking Bad and Narcos and films like Sicario, The Counsellor, Get the Gringo and Meet the Millers. By now, they are almost hardwired into our subconscious.

So, what do these myths disguise? Most obviously they cover up the fact that the drug trade is, in the main, a relatively pacific commercial enterprise. There is no violence inherent in it. Somebody grows some poppies and taps the gum. He sells it to a chemist who processes it into morphine or heroin. He then sells this to a trafficker, who moves the product northwards. And he then hands it to a smuggler who takes it over the border. The drug trade is like any other commercial network. It relies on the exchange of cash for goods; and it is reinforced by social relations of trust, intermarriage, family and friendship.

So where does the violence come from? Why do we now associate the trade with such barbaric levels of savagery? Well, looking back to the past, the roots of this violence seem to be twofold. The first are what I term the drug protection rackets. For over a century, the Mexican authorities have sought to extract money from the drug trade by charging traffickers for protection. Commentators usually just dismiss this as corruption. But it is more complex that that. Many state authorities used – and still use – at least some of this money to build the state, to construct roads and schools, build police forces, bring security, and do so while charging the rest of Mexico some of the lowest taxes per capita on earth. But this system comes at a price. To extract these bribes, the authorities have always had to employ force, to coerce the traffickers to pay up, and to fight off any other official groups that want to establish their own protection scheme. This was – and still is – what causes the majority of violence in Mexico. Not fights over drugs per se, but rather conflicts over who gets to charge traffickers a percentage of their profits in return for protection.

Of course, over the past two decades, the dynamics of these protection rackets have changed. They have fragmented. For over 70 years, Mexico was ruled by a single party. This didn’t mean that there weren’t conflicts over the protection rackets, but these conflicts were all kept within the party. They pitched federal cops against local cops or the state authorities against the army. Now you don’t simply have these institutions, you also have four major political parties, each attempting to establish their own monopolistic protection rackets. This is why politics and organized crime have become so intertwined, and why elections have become so wracked by violence.

At the same time, these protection rackets have privatized. The authorities are not the only players in town. Some organized crime groups—the so-called cartels—have used the massive returns from unstinting U.S. drug demand, as well as the boom in U.S. gun production, to set up their own armies and their own protection rackets. The most successful, like the Sinaloa cartel, do this by allying with the authorities. The most violent – like say the Zetas - usually do this by going alone.

If this is one source of contemporary Mexican drug violence, the other is the war on drugs itself. Drug crime is different from any other form of crime. Unlike theft, or rape, or fraud it has no direct victim. Junkies don’t turn up at police stations complaining that they have been ripped off or they didn’t like that particular batch of smack. So, the police have come up with a solution. In the U.S. where the drugs are sold on the streets, they have gone for the low-hanging fruit. They have flooded urban centers with cops, rounded up the black and the brown, and sentenced millions of small-time weed users and heroin addicts to decades in prison.

In Mexico, the police can’t do this. There aren’t enough of them, and more importantly drug trafficking doesn’t involve obvious open-air sales. It’s all done by intermediaries, who often have no idea what they are actually transporting or handing over.

So, in the early 1970s, when Nixon declared the war on drugs, the police and their allies in the Drug Enforcement Agency (DEA) came up with their own brutal solution.

In short, they caught the suspects and tortured confessions out of them. This was done in many ways, through beating, waterboarding, rape, placing plastic bags over suspects’ heads, and threatening their families. And it is still done today. In fact, between 70 and 80% of Mexican drug prisoners claim that they have been tortured in order to confess.

However, this hardnosed policing has had an incredibly destructive knock-on effect. Because of the brutal nature of drug policing, and the threat of torture, interminable prison sentences, or extradition, traffickers often turn informants. And they then rat on their friends and allies to escape these dangers. This is obviously good for the U.S. and Mexican authorities. It becomes the second means of prosecuting drug crime – getting an informant in a cartel. In fact, they deliberately attempt to engineer these divisions within drug trafficking networks.

But on the streets, these strategies were and still are a disaster. The building blocks of trust and friendship, that really undergird the drug trade, dissolve. Everyone gets paranoid. Mexican and the U.S. authorities deliberately engineer many of the divisions between trafficking groups. And once these fissures had been exposed, they effectively wedge them open. Divisions encourage informants, which in turn generated high-level arrests. Divisions deliver up kingpins, they secure the funding for the police institutions, and they made careers. Those who get in the way—or are killed as suspected informants—are traffickers anyway. As long as they coughed up their networks before they died, who cares?

Violence then is not so much in the DNA of the drug trade as the DNA of prohibiting the trade. And until both American and Mexican police forces stop treating it like a war, the violence won’t stop.