Kara Dixon Vuic is the LCpl. Benjamin W. Schmidt Professor of War, Conflict, and Society in Twentieth-Century America at Texas Christian University. She is writing a book called Drafting Women. 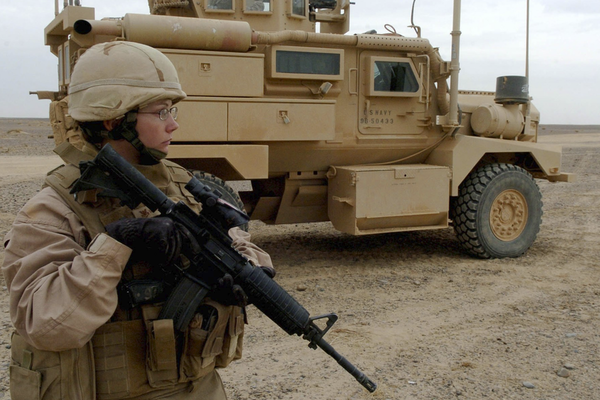 This June, by refusing to hear the case National Coalition for Men v. Selective Service System, the Supreme Court allowed the last vestige of legal sex discrimination in American jurisprudence to stand.

The case brought together an odd pair of political allies: the men’s rights organization National Coalition for Men and the American Civil Liberties Union. Together, they argue that excluding women from Selective Service registration requirements violates men’s constitutional right to equal protection.

The US military has never drafted women, though Congress, the military, and the courts have taken up the issue at several junctures, most directly during World War II and during the early 1970s debates over the Equal Rights Amendment. In fact, when Congress passed the ERA in 1972, it did so with the full understanding that the amendment would make it illegal to exclude women from registration simply because of their sex.

In 1980, when President Jimmy Carter reintroduced Selective Service registration after a brief, post-Vietnam War hiatus, he considered asking Congress to require women to register. Congress took up the matter in a hearing dominated by opponents who argued that women’s military service violated the natural, God-ordained order of things. Ultimately, Congress refused to require women to register, enlisting the frequently used allegation that “the military is not a proving ground for social experiments” in its defense. It was neither the first, nor the last, time that critics enlisted the charge to oppose the service of one group or another.

Problem is, that decision was based on a faulty understanding of Selective Service and the draft. In the first place, the court conflated registration for Selective Service with a wartime draft. Even still, registration and conscription both allow the military to manage personnel needs of all kinds, not simply to funnel draftees straight to the front lines as the court assumed. With the exception of specific draft calls for physicians and (male) nurses, drafts have always inducted individuals without respect to their eventual assignment. Even in World War II, when more than 10 million conscripted men were inducted into the military, less than half of them were assigned to combat.

Additionally, the 1981 Supreme Court based its decision on its rationale that including women was not necessary for Selective Service to function, not whether women’s exclusion was necessary. The court’s scrutiny of sex discrimination cases had evolved a lot in the 1970s, led in large measure by the efforts of future Justice Ruth Bader Ginsberg. By 1981 many expected that the government would have to prove that women’s exclusion was essential to national defense for male-only registration to pass muster. Yet, the court failed to apply the strict scrutiny that many expected , and did not place that burden on the government.

Thus, for more than forty years, women have been excluded from Selective Service registration on the basis of their exclusion from combat. Yet, the military’s definition of “combat” has changed dramatically since the Rostker decision, long before the military removed the final restrictions on women’s service in 2015. As the court understood combat in 1981, all of the women in the 1983 military incursion in Grenada served in combat. So did those in the 1989 deployment to Panama, along with the thousands of women who have served on naval combat ships and piloted helicopters. Indeed, the military has redefined “combat” many times since 1981 to reflect changing wartime conditions and personnel demands. Moreover, when the Department of Defense removed the last restrictions on women’s combat service, Pentagon leaders understood that doing so would open the door to a legal challenge against male-only registration. And, they welcomed that challenge. Military officials have repeatedly endorsed the idea of women’s registration, both as a matter of national defense and of equal obligation. In the case at hand, several retired generals and admirals filed an amicus curie brief that went so far as to say that excluding women from registration impedes national defense.

Yet, even with the legal rationale for women’s exclusion now removed, and with military leaders calling for women’s registration, the Supreme Court still refused to hear the challenge to male-only registration.

Congress, of course, makes the law that guides Selective Service, and Congress should revisit the matter. Trouble is, Congress has been revisiting the matter for many years, so forgive me if I’m skeptical that it will address the question in any timely fashion.

In 2017, a Senate version of the National Defense Authorization Act would have required women to register. When the House and Senate failed to reconcile the issue, they created the National Commission on Military, National, and Public Service as a compromise and charged it with studying not only the question of women’s registration but also broader ways to make national service more appealing to young people. In March 2020, the commission concluded that the “time is right” for women to register. HR 6415, the Inspire to Serve Act, proposes to enact the commission’s findings, including that women be required to register. Another proposed bill would end the Selective Service System entirely, arguing that it is outdated, ineffective, and needlessly costly.

We’ll see what—if anything—Congress does. Requiring women to register is not a pressing issue for many. Many conservative members would likely vote against mandating women’s registration, yet many of them represent regions of the country that send disproportionate numbers of servicemembers—women included—to the armed forces. Many liberals find themselves caught between support for women’s equality and disdain for conscription in any form. Moreover, it seems unlikely that the nation will again require the kind of mass conscription it has known in the past. Registration is, in many ways, a symbolic move, yet it carries very real consequences for those who refuse to comply.

What troubles me most about the SCOTUS refusal to hear National Coalition for Men v. Selective Service System is that it has refused to hear a case based on what Congress might do. It has declined to rule on the law as it stands, and in doing so has made it all the more difficult for anyone to challenge male-only registration in the future.

In the words of the justices, “while Congress actively weighs the issue,” US law continues to uphold one last, legal sexual discrimination.