Thich Quang Duc and the Power of Political Self-Sacrifice 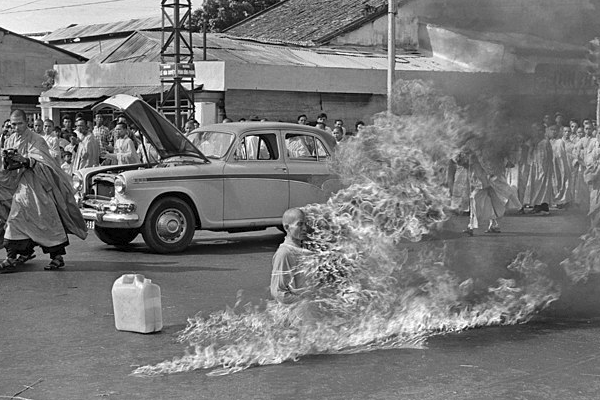 Throughout history, various communities have wondered how to fight back against overwhelming force. Those in control are the masters of war and encourage physical opposition to themselves. They cannot be conquered by traditional physical nor democratic means. In such cases only the unexpected can overturn these advantages.

The young state of South Vietnam was in crisis. The South Vietnamese leader, Ngo Dinh Diem, was the head of a Catholic minority that was persecuting the nearly 80% Buddhist majority. Diem had dedicated Vietnam to Jesus and the Catholic Church, and held public ceremonies displaying crosses. The top positions in government were given to Catholics and they kept the bulk of foreign aid.

Matters came to a head when a law against the flying of religious flags was selectively invoked. The Buddhist flag was banned while the Vatican flag was displayed. A protest involving thousands of Buddhists took place in the city of Hue, and the military were sent in to break up the protest. At some point, a bomb went off and in the ensuing chaos soldiers opened fire on the protestors. When the smoke had cleared, nine people lay dead, including two children who were crushed under armored personnel carriers.

The Buddhist community saw that their protest had failed. They needed to up the ante and make a decisive intervention, and found a solution in their tradition. Self-immolation has a long history in Mahayana Buddhism, which is the predominant school of Buddhism in Vietnam. While suicide is prohibited in Buddhism, self-immolation is, in the exceptional case of the bodhisattva (or enlightened one), understood as an offering and sacrifice to the Buddha.

Buddhist monks and nuns organised a march in downtown Saigon, the capital city of South Vietnam. Quang Duc, together with two other monks, emerged from the car leading the procession and removed a 5-gallon can of aviation fuel. He sat down on the pavement in a lotus position on a busy Saigon street and stared quietly ahead. The fuel was poured over his head and he struck a match to set fire to his robe. He was surrounded by a shield of monks and nuns, which made it impossible for onlookers to extinguish the fire. The monk remained in peace as the flames engulfed him. He never yelled out in pain. His face remained calm until it was so blackened by the flames that it couldn’t be made out anymore.

Quang Duc left a note for President Diem: “Before closing my eyes and moving towards the vision of the Buddha, I respectfully plead to President Ngo Dinh Diem to take a mind of compassion towards the people of the nation and implement religious equality to maintain the strength of the homeland eternally.” The self-immolation was designed to heighten the power of this message. The Buddhist monk and scholar Thich Nhat Hanh (1967) explained in a letter to Martin Luther King that Quang Duc’s act was not suicide or even a protest, but an act of speech:

‘To burn oneself by fire is to prove that what one is saying is of the utmost importance. There is nothing more painful than burning oneself. To say something while experiencing this kind of pain is to say it with utmost courage, frankness, determination and sincerity.’

The photograph caused a sensation around the world. It forced the United States to reconsider their support for the Diem regime. The event left an “indelible stamp on America’s collective consciousness and rudely awakened the Kennedy administration to the gravity of the Buddhist crisis” (Jones, 2003).

The monk’s act also fanned public resistance in Vietnam, involving not only monks and nuns but, for the first time, ordinary citizens. This widened the circle of people willing to support, identify with, or even die for a movement to end the Diem regime.  There were large-scale student protests, and two more monks followed Quang Duc’s lead by committing self-immolation.

The self-immolation is now regarded as a critical point in the collapse of the Diem regime. Later in the year there was a CIA-backed coup d’état by General Duong Van Minh, and the subsequent assassination of President Diem (Singal, 2008). Robert McNamara, the Secretary of State, in defending Washington’s decision to support the coup, said, “We cannot stand anymore burnings.”

It Gained Worldwide Attention and Sympathy

The famous photograph of the monk is shocking. It was like nothing people had seen before. Quang Duc sits peacefully in the meditative lotus position as the flames engulf him. The image is so perplexing, so contrary to ideas of self-preservation that the audience has to stop and ask questions about what is happening.

The photography elicits sympathy for the Buddhist cause. By inflicting pain on himself, the monk signifies who the oppressors are. The image tells us, “our situation is so hopeless we have to do this.” The strategy of gaining sympathy contrasts with some other forms of political self-sacrifice such as the suicide terrorist, who deliberately takes their own life while killing innocent victims in the process.

It Inspired the Wider Community

The act resonated with the South Vietnamese populace because it was consistent with their religious and cultural tradition.  Buddhists have a habit of thinking of self-immolation as heroic, which is a cultural value that is understood by individuals in Buddhist countries even if they are not themselves religious (Fierke, 2013). In addition, making a political intervention is part of the religious tradition. Mahayana Buddhism is a progressive school that is concerned with social justice and change, and emphasises active compassion (karuna) and benevolence (maitre) as the most important qualities of the bodhisattva, or enlightened one.

The emphasis on Buddhism, Vietnamese history and tradition worked to associate the regime with a foreign element – Catholicism – and its distance from the people. Catholicism was a French import, and Diem was imported from and backed by the United States.

It Intimidated the Enemy

The self-immolation was a powerful act of psychological warfare. By being willing to make the ultimate sacrifice for his people, Quang Duc showed the strength and immovable will of the Buddhist community. A foe that isn’t afraid of a painful death cannot be bullied and cajoled into submission.

Furthermore, the act appeared to show that Quang Duc, and by extension the Buddhist community, had divine backing. By remaining calm as the flames engulfed him, he seemed to defy the physical laws of reality. The monk had acquired insight into our ultimate nature, so he felt free to use his body to deliver a powerful message. Only those who know (as opposed to believe) have no fear of casting off the physical body.

Whether this is true or not is up for debate. Neuroscientists are beginning to understand potential changes in the brain’s structure and function after numerous hours of meditation that may have enabled Quang Duc to commit the act (Manno, 2019). From the outside though, it seemed that the monk had God (or Gods) on his side. This acted as a self-fulfilling prophecy as the Buddhist protests led to the fall of the Diem regime.

Jones, Howard 2003. The Death of a Generation: How the Assassinations of Diem and JFK Prolonged the Vietnam War. Oxford: Oxford University Press.

Singal, J. (2008) ‘Introduction’, in David Halberstam, The Making of a Quagmire: America and Vietnam during the Kennedy Era. Lanham, MD: Rowman and Littlefield.