Powerline Politics in the 1970s and Today

Tyler Priest is an Associate Professor of History at the University of Iowa. He is the author of The Offshore Imperative: Shell Oil’s Search for Petroleum in the Postwar United States (Texas A&M, 2007) and co-author (with Joel Hewett) of the forthcoming book, Oceans of Oil: The Epic Struggles Over Offshore Drilling in the United States.  He also co-edited a June 2012 special issue of the Journal of American History, “Oil in American History.” In 2010, he served as a senior policy analyst on the President’s National Commission on the BP Deepwater Horizon Oil Spill and Offshore Drilling. 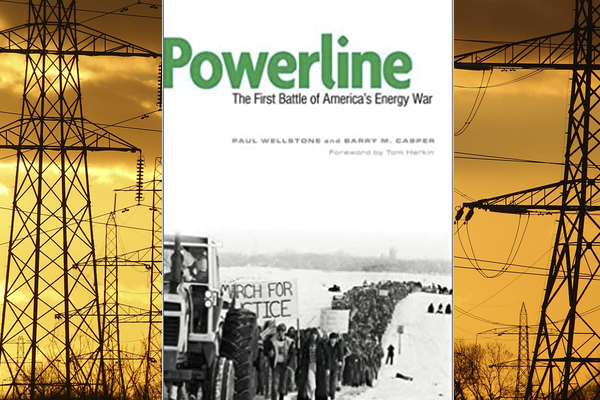 In the frigid winter of 1983, the first book my college professor assigned for our “Introduction to Political Science” course was Powerline: The First Battle of America’s Energy War.  The professor, Paul Wellstone, had co-authored the book in 1981 with his Carleton College physics colleague, Barry (Mike) Casper.  Powerline recounts the fierce protests in the late 1970s by western Minnesota farmers against the construction of a 430-mile, 400-kilovolt powerline, called the “CU Project,” that ran from a coal-fired power plant in central North Dakota across agricultural land to a substation outside Minneapolis.

Wellstone and Casper had coached the powerline protestors and documented their stories.  The alliances they forged helped lay the groundwork for Wellstone’s 1990 election to the U.S. Senate, where he served as its most liberal member until he was killed in a plane crash in 2002.  I wonder what Wellstone and Casper (who died in 2007), both champions of renewable energy and environmental sustainability, would make of today’s brewing energy wars over proposals, such as President Joe Biden’s infrastructure plan, to expand high-voltage, long-distance transmission lines.  A massive build-out of the grid has become central to strategies for decarbonizing the electric sector, electrifying the economy, and meeting net-zero carbon-emission targets by 2050.  Commentators usually present the barriers to such expansion as “financial and administrative.”  An equally large barrier, however, is likely to be political resistance to powerlines like the revolt in rural Minnesota forty years ago.

Powerline is a classic David-versus-Goliath morality tale.  The Goliath electric utilities and state government officials possessed the power of eminent domain -- the right to take private property for public use.  Their allies in state courts and law enforcement enforced government decisions and protected the line.  The dairy farmer Davids in Grant, Pope, and Stearns counties, by contrast, had little voice in the process of granting the “certificate of need” for the line and determining where it would be located.  Neither non-violent nor violent action could stop the project.  The lesson my classmates and I took away from the book was “fight the power!”

Lost on us at the time, though, was the complexity of the power struggle.  The developers of the CU Project were not the investor-owned “private power” companies long distrusted by farmers, but two associations of rural electric cooperatives, the kind that rural Americans fought for under the 1936 Rural Electrification Act.  In the early 1970s, the price paid by the cooperatives for electric power skyrocketed.  Coal-fired power was by far the cheapest option for new electricity generation, and one promoted heavily by the Ford and Carter administrations.  As interviews from the Minnesota Powerline Oral History Project reveal, the cooperatives viewed the CU Project as a way of increasing control over energy costs to their members, many of whom favored the line.  But those supporters did not have easements forced on them through eminent domain.

For those who did, the powerline represented an assault on their way of life, a government intrusion into how they managed their privately owned land.  Many also alleged that electrical and magnetic fields emitted from high-voltage lines caused cancer and other ailments, allegations that have since been disproven.  After exhausting their options through the legal and political system, the farmers’ initial efforts at non-violent civil disobedience turned violent.  Protestors pulled survey stakes, destroyed concrete tower foundations, toppled transmission towers (fourteen in all), and shot at private security guards.

In Powerline, Wellstone and Casper justify these acts of violence and sabotage as the farmers’ only recourse in the face of “increasing centralization of energy facilities and energy control.”  They conclude that the powerline would not have been needed had the utilities followed the “soft energy path” toward conservation and local renewable generation.  They argue that the $1.2 billion in low-interest REA loans for the CU Project would have been better spent on home insulation, wood-burning stoves, and solar-water heaters.  Taking cues from Powerline, a recent history of the 1970s “rural revolt” goes so far as to depict the powerline protestors as budding renewable energy advocates.

That depiction is far-fetched.  These farms, averaging 300-400 acres in size, consumed enormous amounts of electricity, fuel oil, propane, diesel fuel, and gasoline.  Small-scale solar installations would not have powered their dairy, poultry, and crop operations.  These protests were driven by concerns not about energy, but about land.  As the Powerline Oral History project shows, the protesting farmers resented the use of eminent domain to force easements across their land against their will.  They seethed at state and federal environmental laws that prevented the siting of utility lines through wildlife areas and along highway rights-of-way, but not across farmland.

The farmer’s revolt did not prevent the CU powerline from entering into operation in August 1979.  It still delivers electricity today.  However, the revolt did win important reforms for future projects.  Minnesota passed a “buy-the-farm” statute that guaranteed more public involvement in energy siting decisions and strengthened landowner rights in eminent domain proceedings.  The state later amended eminent domain law to increase condemnation payments to property owners.  Congress also revised the Highway Beautification Act to make it possible to build powerlines within highway rights-of-way.  These reforms smoothed the way for the 2017 completion of the CapX2020 transmission project, a system of eight hundred miles of new transmission to bring electricity from the Dakotas across Minnesota.

Still, property rights challenges to the construction of energy infrastructure are gaining force, echoing the complaints from the Minnesota plains in the 1970s.  The context this time is different, mainly due to the issue of climate change.  As part of their “keep it in the ground” strategy to reduce carbon emissions, climate activists oppose the use of eminent domain when it comes to oil and gas pipelines.  Such opposition, however, also feeds resistance to high-voltage powerlines, whether transmitting electricity from fossil fuels or renewable sources.

Whereas climate activists may distinguish between fossil fuels and renewable energy when it comes to enforcing eminent domain, their property rights allies in pipeline fights do not.  Like the Minnesota farmers in the 1970s, rural Americans are intent on guarding their land, and they object more to infrastructure above ground than below.  In 2016, Iowa farmers challenged the granting of eminent domain for the Dakota Access Pipeline (DAPL).  Although supported by the Sierra Club, these Iowans were not concerned about DAPL’s climate implications, but by what they viewed as an unconstitutional taking of their property.  The Iowa Supreme Court denied the challenge, but the state legislature in 2017 acknowledged this property rights insurgency by banning the use of eminent domain for siting overhead electricity transmission lines.

Recently, developers have sketched out many large-scale transmission projects to integrate dispersed wind and solar power into regional grids.  Property owners across the United States are fighting to stop them.  The now-debunked claim that power lines cause cancer still fuels opposition.  As Russell Gold’s Superpower recounts, Clean Line Energy Partners worked fruitlessly for years to overcome landowner objections to powerlines that would bring wind energy from Oklahoma to Tennessee and from Kansas to Indiana.  Those regions, along with Iowa and Nebraska, are precisely where wind energy is needed the most to meet net-zero goals.  Battles have been joined in New Jersey, New Hampshire, Illinois, and Wisconsin to block other transmission projects.  In addition, much opposition has mobilized against wind projects across the Northeast and Midwest, including Minnesota.

In some places, there are options for running lines along railway or highway rights-of-way to avoid eminent domain proceedings.  Transparent and inclusive transmission planning, exemplified by CapX2020, has proven that landholders can be won over in some regions.  Nevertheless, achieving carbon-reduction targets will require many wind farms, solar arrays, and transmission lines across the land of rural Americans.  Will some end up resisting in the way that many Minnesotans did in the 1970s?  Would Paul Wellstone and Mike Casper support such resistance now if it undermined national climate action?