The Post-Trump GOP: Rebirth or Stillbirth?

Michael A. Genovese is President of the Global Policy Institute at Loyola Marymount University. 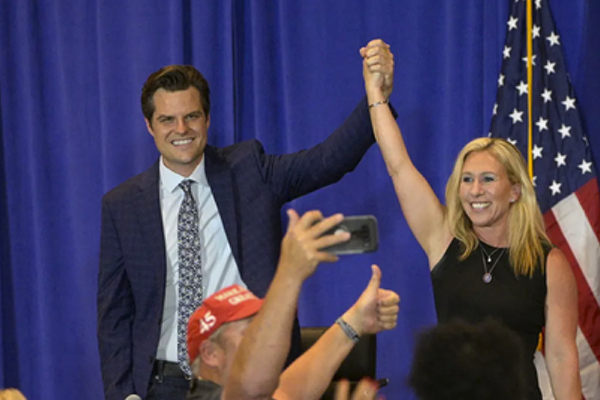 US Reps. Matt Gaetz (FL) and Marjorie Taylor Greene (GA) hope that Trumpism without Trump will make the Republican coalition a winner.

The Republican Party is clearly going through some sort of transformation. Despite losing the presidency, the House, and the Senate in 2020, the party is not having its expected self-analysis and autopsy. Rather than take a cold, hard look at what went wrong, the Party is circling the wagons, and betting it all on Donald Trump as its future. Post-election, Trump quickly put a stop to all questioning and solidified his place as titular head of the party. And any and all doubters had to be banished or destroyed. The Republican Party is now the Trump Party.

Liz Cheney found out just how firm a hold Trump has on the party as, despite a 93% pro-Trump voting record, she was stripped of her position in the Party leadership, and now faces threats of a divisive primary and banishment from the party. Lesson learned?  This warning to all who defy Trump registered loud and clear: unless you publicly adhere to the Trump line (the 2020 election was stolen, January 6 was not an insurrection, up is down), you run the risk of being run out of the party. Take on Trump at your peril.

To outsiders, this total control exercised by Trump is more than a mystery, it defies logic. How, one might ask, can so many be so immune from so much evidence? Donald Trump’s takeover of the party is a stunning political feat; others have tried before him, but very few have succeeded. Give Trump credit.

Should the Trump takeover continue, what impact might it have on the political fortunes of America’s party system?  Are we on the verge of a political realignment?

THE POLITICS OF REALIGNMENT

Traditionally in the United States, party realignments occur every forty years or so. The last major realignment occurred after the Great Depression of 1929. Realignments need a predicate, and the Depression so shook up the world of politics that the glue that held the old party system together lost its adhesive quality and opened the door to a new party system.  In the presidential election of 1932 and then the midterm election of 1934, Franklin D. Roosevelt and the Democrats drew in many new voters and those disaffected by the Republicans to form the New Deal coalition that came to dominate politics for roughly thirty years. It was a big tent, with conservative segregationist Southerners aligning with northern liberals to form a governing party. Republicans became the party of less: less government, less welfare, less of most things (except defense).

The FDR coalition began to break up in the 1960s. It had grown old and tired and when Lyndon Johnson pushed for massive civil rights changes, the Democratic Party split, with Southern segregationist whites abandoning the Democrats for the Republican Party. LBJ knew this would be the result of passage of progressive civil rights legislation, but felt it was the right thing to do and knowingly ceded the South to the Republicans. From that point on, the two parties were more ideologically cohesive, but also began to split further and further apart, with the Democrats moving to the left, and the Republicans moving far to the right. Richard Nixon’s “Southern Strategy” was an effort to draw southerners into the Republican Party, and had it not been for Watergate, might have accelerated the pace of the shift over to the Republicans.

THE REPUBLICANS MAKE A BID FOR REALIGNMENT

Arizona Republican Senator Barry Goldwater railed against the old ideology of the party as a “less than” party and wanted the Party to truly stand up for conservative values. In the short term, this backfired as Goldwater lost the 1964 presidential election to Johnson in a landslide. But Goldwater’s views began to permeate the party. By 1980, the Republicans had a more attractive face for their conservatism: Ronald Reagan. Reagan blasted government programs (“Government is not the solution to our problems, government is the problem”) and the old FDR coalition, by then running on fumes, began to collapse.

But Reagan did not realign the parties. He proved more popular personally than were his ideas. The cult of Reagan would dominate the party for three decades, but not lead to a partisan realignment. Enter Newt Gingrich, whose “fight club” mentality made politics a blood sport. Democrats were not to be defeated at the ballot boxes, they were to be vanquished a wartime enemies. Gingrich’s politics of personal destruction took the party of Reagan, and gave it a brutal, vicious edge.

As a result of the Democrats’ failure to reinvigorate their base, and the Republican narrowing of message and efforts at political warfare, the United States seemed headed less for a political realignment and more towards a de-alignment. A pox on both your houses! Elections were won by a Democrat, then a Republican, a Democrat and again, a Republican. There was no governing party nor was there a governing ideology.

THE UNLIKELY RISE OF DONALD TRUMP

Enter Donald J. Trump.  His election was as surprising as was his ability to take over the Republican Party. In fact, the party just seemed to lay down and let Trump take over. It put up little resistance and, despite Trump’s manifest weaknesses as a person and as a leader, his base became almost fanatically loyal to him. Soon it became the Party of Trump, a cult of personality in which Trump the person was worshiped, while Trump’s ideas could hop from one position to another. The Republicans ceased to be a party of ideas and became a party of personality.

Is Trump the stuff of which party realignments are made? The Republican Party of 2021 is banking on it. Is there method to this madness? (Spoiler Alert: NO).  Is Trump the Party’s Savior or Destroyer? Is loyalty to one person sustainable and enough to build a new majority or a new Republican Party?

Historically, events (the Depression for example) or ideas (an end to slavery) have animated the birth of new political realignments. What we are witnessing in the rise of Donald Trump as leader of the Republican Party is merely a cult of personality. When he goes, it goes. What will be left behind in the ashes of Donald Trump’s departure from the political scene? Is he developing a cadre of young leaders who were inspired by his rhetoric and accomplishments as was the case with John F. Kennedy and Ronald W. Reagan?  Did he leave behind inspiring calls rhetorical flourishes such as “Ask not what your country can do for you, ask what you can do for your country” or memorable calls to action such as “Mr. Gorbachev, tear down this wall!”? Did he bequeath a governing philosophy (“America First”?) that will live on long after he departs?  Just what is there to cling to, post-Trump?

More likely than a partisan realignment, Donald Trump’s harnessing of anger and resentment will be a virus that remains in the body politics form years to come. It will be hard to rid society of the toxic materials he has spewed into our bloodstream.

Healthy political systems have avenues of rebirth and reinvigoration. Our system is ripe for a realignment and hungry for a governing coalition. It may yet appear. But history suggests that anger and resentment are not the building blocks that will attract a majority of citizens to march behind its banner. From the Know-Nothings to McCarthyism, from the anti-Chinese laws to the anti-Muslim bans, negative appeals have a short shelf life. As a country, the better angels within us seem somehow to save us from ourselves.