Betsy Gaines Quammen, PhD is the author of American Zion: Cliven Bundy, God and Public Lands in the West. 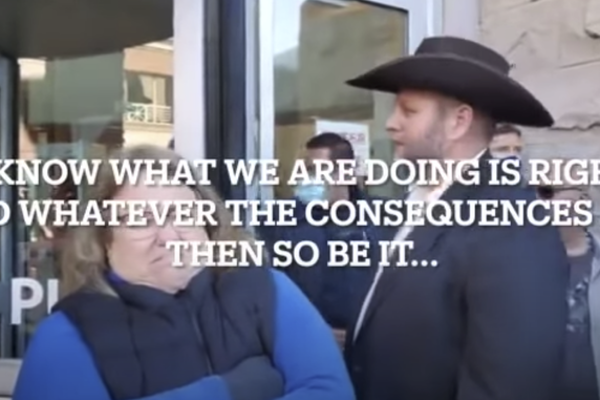 Ammon Bundy's arrest for failure to appear was triggered by his refusal to wear a mask into the courthouse.

Coming from a long line of religiously inspired men who have been “called” to defend the US Constitution, Bundy has varied in his focus, from rebelling against public land ranching regulations to protesting COVID-19 safety protocols. But in his view, these are all forms of government tyranny and affronts to constitutional rights. Arrested for the fourth time on March 15, 2021, Bundy was taken into custody for failing to appear at his hearing on past trespassing charges. Because he refused to wear a mask into the courtroom, thereby missing his trial, he was apprehended outside amid of a throng of other protesters.

Bundy’s crusade has been a long time in the making, but in the last year he successfully established a coalition of supporters that is broad, diverse, and a serious threat to federal law. His group is called the People’s Rights Network. Like the Oath Keepers and Proud Boys, it includes members who see the current government as a threat to perceived rights and are committed to defend their ideas of personal liberty, by force if necessary.

So what has taken Ammon Bundy, who first came to prominence during the 2014 armed standoff in Nevada over his father’s unpaid grazing fees and trespassing cattle, into a life of an anti-government militant? The answer is a libertarian worldview and his take on Mormonism. Bundy’s ideology parallels the thinking of certain leaders in the Church of Jesus Christ of Latter-day Saints, who’ve had a history of government cynicism. He also shares with them a tradition of theo-constitutionalism--venerating the Constitution as a sacred document. The paradox here is that Bundy believes he is upholding the Constitution and fulfilling his religious duties in his acts of lawlessness.

His impetus has roots in the early Church. After the founder and first prophet of Mormonism, Joseph Smith (1805-1844) was murdered, Brigham Young (1801-1877) assumed the reins of the Church and brought the Latter-day Saints into the Great Basin. By that point, Young and his brethren were disgusted with the US government after the years of mistreatment and bigotry they had faced. But the Mormon people kept great faith in the Constitution. While still an apostle of Smith, Young said “I find no fault with the Constitution or laws of our country; they are good enough. It is the abuse of those laws which I despise, and which God, good men and angels abhor.” He later avowed “ Corrupt men cannot walk these streets with impunity, and if that is alienism to the Government, amen to it. The Constitution of the United States we sustain all the day long, and it will sustain and shield us, while the men who say we are aliens, and cry out ‘Mormon disturbance,’ will go to hell….But to proceed; the principal evil is in the rulers, or those who profess to be rulers, and in the dispensers of the law…”

Young was not just the leader of the Church; like Smith, he was a prophet. Although he was not as prolific in his revelations as other Mormon prophet/presidents, these statements are memorialized in the Journal of Discourses and the History of the Church, texts not part of official Church doctrine, but significant, especially to those with radical leanings. Over the years, many Church prophets echoed Young’s sentiments, from Wilford Woodruff (1807-1898) to Ezra Taft Benson (1899-1994), reinforcing the idea that the Constitution is good, but not those who govern under it. Benson took that idea further, declaring that the Mormon people had a religious obligation to protect the Constitution, even if this meant violence. In 1979 he declared, “I say to you with all the fervor of my soul that God intended men to be free. Rebellion against tyranny is a righteous cause. It is an enormous evil for any man to be enslaved to any system contrary to his own will. For that reason men, 200 years ago, pledged their lives, fortunes, and sacred honor. No nation which has kept the commandments of God has ever perished, but I say to you that once freedom is lost, only blood – human blood – will win it back.”

So this is where things get treacherous. If the Constitution is sacred, but those overseeing it are evil, then who determines and upholds the law of the land? Bundy has come to think that this is his duty—a chilling certainty that is likely to escalate during this current administration. As vaccines are more widely administered and mask mandates therefore become less of a concern, Bundy’s focus will return to his original cause. The new Secretary of the Interior, Deb Haaland, is now charged with overseeing public lands, including the place where Ammon’s Bundy’s father, Cliven, continues to illegally graze his cows. The patriarch Bundy and his most infamous son share the conviction that the federal government has no constitutional right or power to own land; hence the land belongs to those white people who have occupied and used it, and the requirement of grazing fees paid to the Bureau of Land Management is unconstitutional. Although Cliven has repeatedly lost his appeals in federal court, and currently owes over a million dollars in fines and fees, the old rancher’s cows still roam the same BLM land, years after the Nevada armed standoff. To Ammon, mask mandates and grazing regulations are the same thing—affronts to constitutional rights. Law and common good be damned—he sees both as tyranny. He is determined to protect the Constitution, even by unconstitutional means. Where the next action is again taken—Nevada, Oregon, or somewhere else on the 600,000,000 acres of American public lands—remains to be seen.

In 2018, Bundy talked before an audience in South Jordan, UT during an event advertised as a “power packed four hours, with an LDS [Latter-day Saints] perspective, but practical info for all true friends of liberty.” He told them about his father’s dream, in which people approached a large building. Inside the building sat a golden calf, a biblical reference to a false idol, that Cliven understood to symbolize the American court of law. Ammon explained that the dream meant people are putting their faith in judges who do not have their best interests at hearts. “You can’t worship the golden calf, you have to have faith in God,” he told the audience. “When you know for certain that those are your own rights, you do not allow them to be questioned. And I know that’s a strong thing I’m saying. But when you do that, then your friends need to come and protect you also. And it’s a duty of ours to do that.” Four months later, PeoplesRights.org was registered, a year and two months before pandemic brought America to a screeching halt. COVID-19 gave him a cause that fit a long ongoing narrative. The pandemic swelled the ranks of People’s Rights because of conspiracy theory and righteous anger, but it wasn’t invented in response to it.

Ammon Bundy has been looking for a next battle since the takeover of Malheur, when he led a group of heavily armed militia to occupy government buildings in Harney County, Oregon. During that takeover, one man, LaVoy Finicum, was shot and killed by police. Ammon now has his own militia, the People’s Rights Network, an army of over 50,000 members in 50 states, according to the organization’s website. He recently finished a recruitment tour in Utah, talking God, liberty, and the need for vigilante action—antidotes to golden calves. His campaign is part of a long drawn arc and we shouldn’t expect his rebellion to end with a die-down of COVID-19. Bundy’s attention will return to public land battles, where the first insurgencies began. It wasn’t COVID-19 that spurred the formation of the People’s Rights Network and inspired Bundy’s mission, it was a deeply rooted sense of righteousness, Cliven’s dream, and a version of Mormon ideology.