America Does Have an "Original Sin": A Response to James Goodman

Joshua Ward Jeffery is Assistant Professor of History and Diné Studies at Navajo Technical University, and the editor of H-High-S, H-Net’s High School History and Social Studies Education Network. His research and teaching interests include American religious history, political history, environmental history, the history of the American West, political theology, and post-colonialism. His latest published project is part of a collaboration with several colleagues from Lipscomb University on the political theology of David Lipscomb, is Resisting Babel: Allegiance to God and the Problem of Government (ACU Press, 2020). 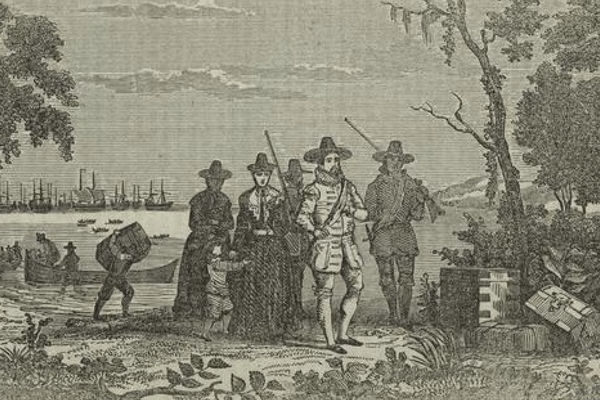 Scrolling amongst all the clickbait on CNN’s website these days, I was genuinely intrigued when I saw James Goodman’s headline “It’s Time to Stop Calling Slavery America’s ‘Original Sin’.” I was, however—as I often am—left disappointed by the click after I read the contents.

While I agree with Goodman’s conclusion that slavery is NOT America’s original sin, I disagree with how he arrives at this conclusion. Goodman begins by critiquing the theological origins of the idea of “original sin,” rejecting the concept as irrelevant to our polity, seeing it as an unnecessary confusion between our secular state and Christianity. Indeed, American scholars can sometimes be quick to dismiss the importance of religion in American society. If this were simply a response to the recent corrupt entanglement of evangelicalism with the American right, it might be more understandable, but the fact is, Goodman’s reaction is illustrative of a much larger trend among American scholars that tends to ignore religion (and especially, conservative religion) and its influences in the hopes that it will just simply fade away. We can find the seeds of this in American life even among liberal theologians shortly after the end of the First World War, when Harry Emerson Fosdick, a prominent Presbyterian public theologian, intellectual, and modernist asked, “Shall the Fundamentalists Win?”

To understand American history, and the American present, means that we must also understand the lasting influence of American religion. The idea of “original sin,” is, in fact, an apt metaphor for what continues to plague American society. It is just that slavery is a symptom of this original sin, and not the first sin itself.

But before I address America’s original sin, I first want to defend the use of the metaphor. In 1967, in what is now a seminal classic article in the field of sociology of religion, the esteemed scholar Robert Bellah published “Civil Religion in America” in Daedalus, the Journal of the American Academy of Arts and Sciences. In this article, Bellah demonstrates how American politicians, as well as the American people, have practiced a “civil religion,” that has allowed politicians to continue to use and co-opt the Deism of the American founding generation as a unifying religiopolitical force that acknowledges a “divine providence” that was generic enough for Americans from most religious persuasions to accept. Politicians used and continue to use the rhetoric of American Civil Religion because it works, and the vast majority of Americans accept it. For those that doubt, witness the recent use of religious language to describe the U.S. Capitol during the middle of the armed insurrection against President Joe Biden’s election: American politicians and citizens alike were aghast that Trump’s supporters would violate the “sacredness” of the Capitol Building and America’s political institutions under the Constitution. Political crimes against the “spirit” of Democracy truly are sins to the American people because of American Civil Religion.

Further, Goodman misunderstands the term of original sin. While he is correct that the concept in Christianity means that an original actor committed the sin, he is incorrect in his assertion that those who inherit the guilt of this sin are not responsible for it. While many Christian faith traditions reject the doctrine of original sin outright (it is, after all, originally a doctrine of the Catholic Church), those Christians that do hold to it believe that the original sin tainted all of humanity, to the point that it ensured continued sinfulness among all peoples, and it also meant that without a redeemer, all those who inherited this sin would be condemned to hell for its seriousness.

Translated to American Civil Religion, such an original sin would mean that all of America is condemned for the nation’s (in this case, white America’s) crimes. Without redemption, the entire country is on the course to hell. However, in American Civil religion, the Great Emancipator of Abraham Lincoln has (in the eyes of certainly not all, but many), functioned as the redeemer, the divine agent of providence that would finally free us from the scourge of this original sin. However, as I look around American society, we still appear to be damned. Racial inequality remains long after both emancipation and the Civil Rights era. Unarmed black men and women continue to be shot by our law enforcement officers, who have been socialized to believe that the next person they contact might try to kill them, and even more so if they fail to possess white skin. It is quite apparent that the damnation of America’s original sin is still with us.

America’s original sin, however, is not slavery, it is settler colonialism. As Goodman finally acknowledges in his piece, slavery would not be America’s original sin, because America’s sinfulness begins with the dispossession of indigenous lands. Settler colonialism, however, as an organizing principle, encompasses not just the theft of lands from the indigenous peoples of the Americas, but it also includes the forced labor of slavery, both chattel and otherwise, in order to bolster the budding capitalistic project of imperialism. After all, the original form of British American colonialism was carried out by the Virginia Company, incorporated under the British crown in order to carry out the Empire’s wishes and to make its original shareholders a significant profit.

John Winthrop of the Massachusetts Bay Company and colony, in a letter to both potential supporters and detractors, described the right of the Puritans to take indigenous lands as a reaction to the closure of the English commons. The rich in England had enclosed the land that commoners had used for centuries to grow crops and graze upon in order to sustain themselves, and this natural right (granted by God, he believed) gave way to a civil right to make such land private by the act of erecting fences and gates. Believing that God had shown him and the Puritans a new commons, they argued that they could use any land not currently used and occupied to European standards by the indigenous peoples of America. While Winthrop made this argument, much of his letter is spent arguing against those who had warned that it was immoral to take indigenous lands because indigenous people had occupied it for centuries. While Winthrop thought he had the right to take indigenous lands, some back home in England thought the theft of the land was sinful. And they were right.

Settler Colonialism continues to damn America. Today, in the midst of the COVID-19 pandemic, the virus kills more indigenous and African American people than it does white Americans. Where I live, on the Navajo Nation, many of my students are among the 30% of the Navajo population that in 2021 still do not have electricity or running water in their homes. Some of my students charge their cell phones, tablets, and laptops in their cars overnight and use mobile hotspots in order to turn in their homework, but can’t take a shower in their own homes and have to use camp stoves to cook. With 57-hour weekend lockdowns to stop the spread of COVID, many couldn’t even keep perishable food cold over the weekend because of a lack of access to ice.

As part of settler colonialism, indigenous communities are denied their full sovereignty. Recently, two different indigenous nations in South Dakota shut down their borders to non-tribal members in order to keep the virus from infiltrating their communities, since the massively underfunded Indian Health Service would be quickly and completely overwhelmed by the arrival of COVID-19 to their reservations. In response, South Dakota Governor Kristi Noem threatened both tribal governments with lawsuits if they did not allow traffic to flow freely in and out of their reservation. The requirements of settler colonialism and capitalism demanded the death of more indigenous people in order to keep money and “liberty” flowing. Settler colonialism is America’s original sin, and it continues unabated to this very day. America will continue to find itself in hell—or at least, in purgatory—until it repents from and seeks redemption for its actual original sin. Additionally, American scholars will continue to misunderstand American society and culture if they fail to take stock of American civil religion and the spiritual beliefs of Americans in general. Original sin, after all, must be cleansed by a redeemer, but first, we must acknowledge our complicity in the sins of our ancestors.

Editors Note: HNN excerpted the essay by James Goodman referred to here in our Roundup of op-eds in February.