by Robert A. Schneider

Robert A. Schneider is Professor of History at Indiana University, Bloomington and has published multiple books and articles on political history and early modern Europe. He is currently at work on a book on the politcs of resentment. 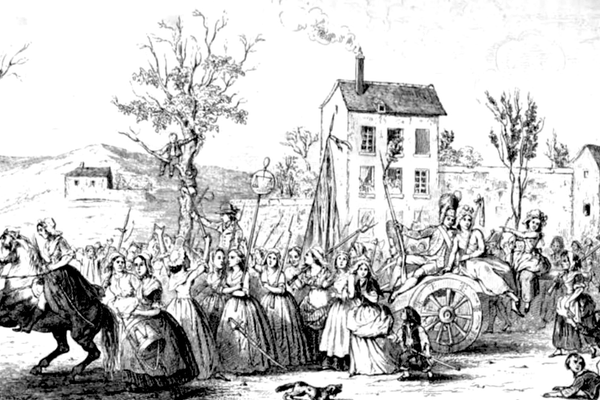 On October 5, 1789, a large crowd of Parisians, comprised mostly of so-called market-women angered by the high price of grain and food shortages in the city, made the six-hour trek to Versailles, the royal palace, a little more than nine miles west of the city. They came to lay their grievances at the feet of their king. In the early morning hours of the second day, their protest turned into a siege: the crowd forcibly made its way into the chateau, rummaged about in its spacious confines, slaughtered two of the guards, and nearly succeeded in breaking into Marie Antoinette’s bedchamber, prompting her to scurry to safety in her bedclothes. They ultimately managed to coerce the royal family to accompany them back to Paris, where they would reside under the watchful eyes of the people in this revolutionary moment. Coming almost three months after the fall of the Bastille, this event was a dramatic step in the decades-long process historians call the “de-sacralization” of the monarchy, culminating in Louis XVI’s beheading in January 21, 1793.

In the wake of the January 6 siege on the U.S. Capitol, several members of Congress characterized the insurrectionists’ actions in terms of an invasion of this “sacred space,” this “temple of democracy.”  And while the actions of the revolutionary crowd in late eighteenth- century France were more purposeful, more legitimate, and certainly more consequential than the riotous antics of the motley band of die-hard Trump supporters, it is precisely their shared transgressive nature which I believe helps us understand the deeper meaning of what transpired in Washington that terrible day, and indeed, what lies at the heart of Trump’s appeal to his zealous followers.

From what we know, it is clear the rioters were imbued with a mission-- “Stop the Steal,” which at that moment meant somehow forcing Congress to reverse the vote of the Electoral College, or convincing Mike Pence to do it for them.  It is just as clear that some were more purposeful and prepared than others. The guy who came equipped with a bundle of zip ties obviously had an agenda.  Others were probably not so sure; and many were likely in it for the wild ride, wherever it would take them. However, for purposeful and mindless mischief-makers alike, what transpired became meaningful less for any premeditated consequences than for the experience itself: they carried out an unprecedented, dramatic, massive, public act of transgression. They both physically and symbolically broke barriers, sullying norms and spaces-- and demonstratively relished every moment, turning the riot into a celebration.  It was as much a carnival as an invasion-- a freakshow which combined the outlandish with the destructive.

Students of collective action know that virtually every protest, especially those that become boisterous and violent, can lead to acts of transgression-- when the crowd breaks free of prescribed constraints, when a spirit of provocative contentiousness takes hold, when the chanting turns into taunts and insults against the authorities, when normally out-of-bounds spaces are invaded and occupied. Indeed, the act of looting, usually looked upon as a punitive lashing out at neighborhood exploiters, or, less charitably, an opportunistic grab at free stuff, really embodies transgression in very physical terms.  So too, during the protests of the ‘sixties, when student radicals who took over campus buildings sometimes posed-- like the gentleman looking very pleased with himself as he sat, feet up, in Speaker Pelosi’s office in the Capitol-- perched at the desk of a Dean or President of the University. It is the world turned upside down, more thrilling than purposeful, less productive than merely exciting.

Transgression can take myriad forms. And once you begin to consider it, you see it everywhere. It’s the irreverent stand-up comic, testing the bounds of good taste; it’s the political cartoonist, daring to depict the Prophet Muhammed; it’s the performance artist challenging aesthetic norms; it’s the right-wing talking head, gleefully flouting the inhibiting strictures of political correctness.  In the realm of art and popular culture, it can prove creative, undermining ossified genres, upsetting entrenched canons, expanding the boundaries of what can be said and thought.  And politically too, it’s liberatory potential has been demonstrated time and again. Without transgressive political actors virtually every progressive cause would be toothless.

But it’s also Donald Trump, ex-provocateur-in-chief, whose whole political presence these last years has been a series of transgressions, whose very mode of self-presentation said: “I’m going to violate every standard, every precedent, every expectation for a President.”  But he would also add: “I’m doing it for you!”  In Trump and his zealous acolytes transgression is not a means but merely an end, an end infused with grievance and resentment.

In an existential sense, then, this was Trump’s riot, apart from any legal or identifiable ways he also instigated it. The mob was acting out his transgressive rule. And they were returning the favor: They were doing it for him. Like his presidency, it was less about accomplishing something than simply breaking things, and by doing so declaring their contempt for established elites that is at the heart of the right-wing, resentful populism he has fed upon, channeled and encouraged ever since he descended that golden escalator in Trump Tower to announce his candidacy.  Most Republican officials, even those who were all too ready to subvert the electoral process, have been quick to disown the January 6 insurrectionists.  But they should be careful, for their own subversion is of a piece with the transgressions of the mob and the ex-president alike. They may one day regret the ugly forces they have unleashed.