Poverty, Politics and Pandemic: The Plague and the English Peasant's Revolt of 1381

by Alfred Thomas and Peter Rutland

Alfred Thomas is Professor of English at the University of Illinois at Chicago. He is the author most recently of The Court of Richard II and Bohemian Culture: Literature and Art in the Age of Chaucer and the Gawain-Poet (2020). His current book project is Writing Plague: The Politics of Pandemic from Chaucer to Camus. Peter Rutland is Professor of Government at Wesleyan University. 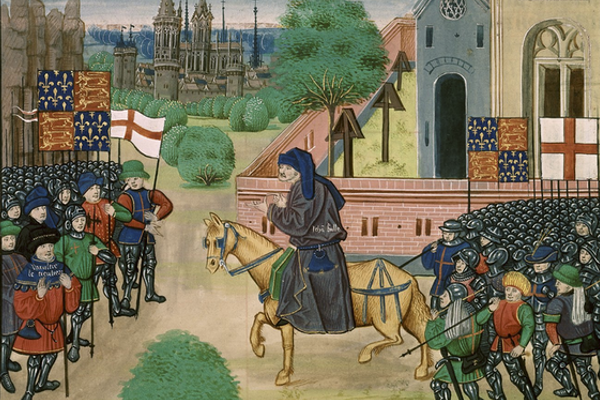 An angry crowd of rebels, fiercely loyal to the head of state but determined to punish his subordinates as traitors, listens to his speech and, inflamed by his words, rushes to the most prominent landmark in the city where the politicians are hiding in fear. The mob manages to break into the building and proceeds to ransack its interior, including government documents. In the ensuing conflict, several people are killed.

This is not Washington, DC on January 6, but London, on June 14, 1381. In the Peasants’ Revolt thousands of disaffected subjects of King Richard II, angry at the imposition of a punitive poll tax that favored the rich, invaded London and demanded the abolition of serfdom. While Richard was parleying with the rebel leader Wat Tyler in Mile End, a mob stormed the Tower of London where – in a security breach – a gate had been left open. The mob killed some of the royal ministers sheltering in the Tower, and beheaded the Archbishop of Canterbury, who had just resigned as Lord Chancellor.

The storming of the Capitol in Washington on January 6 was an event steeped in history and self-consciously historic. Commentators immediately invoked the parallel with 1814, when British forces torched the Capitol and the White House. The rioters themselves claimed the revolutionary legacy of 1776, reflecting the rhetoric of Trump aides in the wake of the November election. On November 14 Trump lawyer Sidney Powell said in an interview “This is essentially a new American revolution.”

In their speeches later on January 6, after they had returned to the chamber, outraged senators and representatives invoked the spirit of Lincoln, urging decisive action to defend the Republic. Senator Michael Bennet drew an even deeper historical analogy, referencing “what happened to the Roman Republic when armed gangs -- doing the work for politicians -- prevented Romans from casting their ballots. ... And that was the end of the Roman Republic or any republic for that matter until this beautiful Constitution was written, in the United States of America.”

But it is also worth pondering the parallels with the violent conflict in 1381. After all, Rudy Giuliani himself kicked off the proceedings on January 6 by calling for “trial by combat” with Trump’s foes. (Trial by combat was a legal form of dispute resolution in medieval England: the last recorded case was in 1446.)

Skeptics may say one cannot compare the plight of medieval serfs with the ire of bigots intent on overturning the results of a democratic election. But just as the Capitol mob included IT consultants and CEOs, so too the rebels of 1381 were not all peasants, but also free men who were also subject to the poll tax.

Hatred of foreigners (including Jews and Muslims) was part of the psychology of medieval Christians. It is the kind of mindset encouraged by President Trump who tried to ban migrants from Muslim-majority countries. Then as now, fear of foreign competition was an issue. The mobs rampaging through London targeted Flemish cloth merchants who were undercutting the English wool trade. Dozens of them, identified by their distinct accent, were killed.

What the English rebels and Trump’s supporters have in common was the urge to scapegoat others for their perceived grievances. Also, both groups were acting in a climate of hysteria compounded by a biomedical catastrophe. The Black Death (the bubonic plague) killed about half the population of England and Europe between 1348 and 1351. That created an atmosphere of fear that inevitably resulted in the need to blame “outsiders.” Typically, Christians accused Jews of poisoning the wells and deliberately spreading the plague. Since Edward I had expelled all the Jews from England in 1290, there were few left to kill.

Over the next few weeks and months King Richard’s soldiers captured and executed thousands of rebels. Contemporary writers like Thomas Walsingham and John Gower condemned the rebels as lowborn serfs and traitors. In the minds of the rebels, these chroniclers represented the oppressive political elites, and they saw themselves as the true patriots. Trump’s supporters perceive today’s mainstream news media in the same way.

For all the differences in values and beliefs, the distant world of medieval England still resonates in our current political debates. For years, liberals and conservatives alike have cited the Magna Carta, signed by King John in 1215, as foundational for the American republican tradition. Key pillars of the common law tradition, such as trial by jury and the right to bear arms, are rooted in that era. For example, in the pivotal 2008 case of DC vs Heller, in which the US Supreme Court struck down a Washington, DC statute banning handguns, Justice Antonin Scalia cited the 1328 Statute of Northampton when writing the majority decision (The Statute banned the public carry of edged weapons).

For years, socialists have celebrated the Peasants’ Revolt as the first stirring of modern liberty. If the revolt had succeeded and the rebels had gained their demands, it would have transformed English society and would have anticipated the American and French Revolutions by 400 years. But seen in this historical light, the English rebels start to look less like the innocent victims of tyranny and more like the Trump supporters who invaded the Capitol.

The political and economic crisis created by COVID-19 is both epidemiological and epistemological: objective truth is hard to find in a world where news reporting has descended into a partisan slanging-match between ideological opponents. Studying similar episodes from times past may help us to get beyond this vicious circle of blame and recrimination, of fear and anger.

What the 14th century and our own age have in common is not only a pandemic, but also a loss of shared belief in the ideological system – of feudalism then, and democracy now.