Jan-Benedict Steenkamp is C. Knox Massey Professor at the University of North Carolina’s Kenan-Flagler Business School and is the author of Time to Lead: Lessons for Today’s Leaders from Bold Decisions that Changed History. 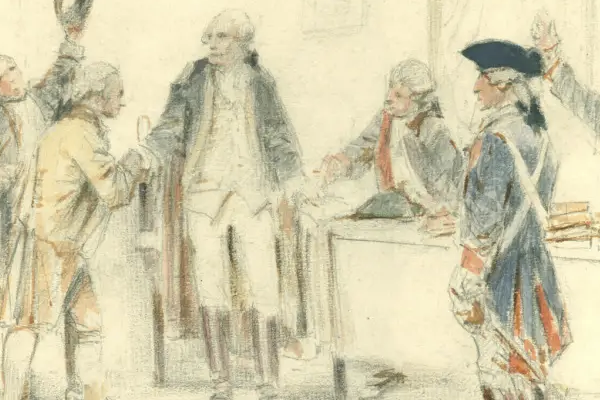 Most of us know that George Washington refused a third term as president of the United States. He set a precedent followed by all other presidents except for FDR and it is now enshrined in the Constitution as Amendment XXII. Less known is that he earlier refused an even more exalted offer: that of military dictator. What happened?

In early 1783, as the Revolutionary War was for all practical purposes over, the situation in the nascent U.S. resembled the chaos in ancient Rome at the time of Caesar, or in France in the late 1790s. The Continental Congress was weak and unable to raise money to pay debts to civilians for war supplies and the back pay and pensions promised to the officers and soldiers. Officers and leading financers met and agreed that the only protection for creditors, whether civilians or soldiers, was the strength of the army. In fact, the army was the only well-functioning national organization. If Congress proved unable or unwilling to honor their debts, military force should be used as a temporary expedient–as any military dictatorship invariably has claimed in world history. The big question was whether the army’s commander in chief, George Washington could be persuaded to join the emerging insurrection. Nobody less than Alexander Hamilton took it upon him to persuade Washington.

In a letter to Washington, Hamilton argued that Congress is “a body not governed by reason (or) foresight but by circumstances.” He proposed that an army revolt could help to spur Congress to action. However, he was also concerned that such a coup might get out of hand, an outcome could be avoided if Washington would put himself at the helm of this movement, not for his own sake, but for the sake of the country. This same old argument has been used time and again, from Julius Caesar to today’s strongmen like Egypt’s President, General Abdel Fattah el-Sisi. Under Washington’s benign control, justice would be achieved.

Washington did not buy Hamilton’s arguments. He was keenly aware of the situation. As he said to one general: “The army, as usual, are without pay and a great part of the soldiery without shirts. And though the patience of them is threadbare, the states seem perfectly indifferent to their cries.” Yet, he did not believe a military junta headed by him was the solution. In his response to Hamilton, Washington argued that it would be “impolitic” to involve the army as party in the legislative process, which might only “bring on its concomitants.” But Washington also saw the danger. He realized the atmosphere among his officers was grim, to say the least. If he would not act, the army might move without him. Therefore, he called a meeting of all officers on March 15, 1783 at the headquarters of the Continental Army at Newburgh, New York.

Historian James Flexner called the Newburgh it “probably the most important single gathering ever held in the United States.” Washington addressed the officers but failed to sway them. Then something happened. To reassure the officers of congressional good faith, he pulled a supportive letter from a congressman, but stumbled over the first few sentences. He seemed confused, staring at the paper helplessly. He then pulled from his pocket a pair of new reading glasses, which came as a surprise to his officers, who had never seen him wearing glasses. He said, “Gentlemen, you will permit me to put on my spectacles, for I have grown not only gray, but almost blind in the service of my country.” This heartfelt, simple act did what lofty words failed to achieve – it moved his angry, battle-hardened officers to tears. It reminded them of the many sacrifices their commander in chief had made for his country. The so-called Newburgh conspiracy was over. There would be no military coup.

The final act of this saga occurred in December 1783. He went before the Congress and said: “Having finished the work assigned to me, I retire from the great theater of action … I here offer my Commission and take leave of all the enjoyments of public life.” The words and symbolism were profound. Congress had commissioned him as military leader eight years earlier, and, to Congress, Washington returned his commission. The new republic would be a city on the hill, led by civilians, and the armed forces – like any other group in society -- were subject to civilian control.

It is easy for us to underestimate how unusual Washington’s refusal to heed the siren call of absolute power was. Almost every revolution in the history of the world, however idealistically begun, has ended in tyranny. The military dictatorships of Julius Caesar and Oliver Cromwell had destroyed the Roman and English Republic, respectively. Just a few years later, in 1799, General Napoleon Bonaparte would grab power in France. Since then, many other countries experienced military dictatorships—always claimed to be for the good of the people, with democracy just around the corner—e.g., Pakistan, Brazil, Congo, Argentina, Burma, Spain, Egypt, Turkey, Algeria, and Portugal. America avoided that fate because of one man saying no.

Washington’s authentic leadership was not lost upon others. The highest praise came from an unexpected quarter. According to his erstwhile nemesis, King George III of Great Britain, Washington stood out as “the greatest character in the world.”