A Modern Day Lynch Mob Invaded the Capitol on January 6 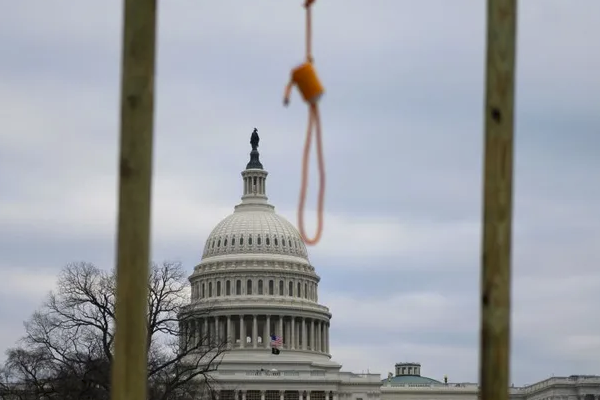 The terrorists who stormed the U.S. Capitol on January 6, 2021, were nothing less than an old-fashioned lynch mob. The fact that they did not succeed in lynching anyone is rather immaterial—they were prepared to do so, even down to the gallows they erected on the National Mall. And every other facet of their actions harkens back to the spectacle lynchings of the late nineteenth and early twentieth centuries.

First, just consider the impunity with which they operated. These terrorists besieged the capitol building and then roamed its halls undisguised. Likewise, on December 31, 1904, a mob of about 700 people broke into the jail at Newport, Arkansas, and took Louis Allwhite, whom they marched to a railroad trestle outside of town, where they hanged him. This occurred in the full light of day, and despite the fact that members of the mob were described as “generally known” by the press, the coroner’s jury nonetheless concluded that Allwhite “came to his death at the hands of an unknown mob.” The next day, the Arkansas Gazette editorialized: “Why should there be talk about the decline of humor? It Isn’t on decline at Newport.” Of course, the greatest manifestation of the mob’s impunity was taking pictures of themselves with the lynching victim, knowing full well that documenting their crimes would not affect their lives at all. And so did we see the terrorists of January 6 extensively document their attacks upon police and their acts of property damage, all on social media.

Next, both groups, those older lynch mobs and these more modern terrorists, collected souvenirs of their deeds. The examples of lynch mobs taking souvenirs is extensive. After the lynched body of Henry James was finally taken down after his May 14, 1892, hanging, residents of Little Rock, Arkansas, rushed to grab pieces of the rope that had been used to string him up. On June 19, 1913, the mob that lynched Will Norman in downtown Hot Springs, Arkansas, at the site of the current Hot Springs Confederate Monument, burned his body to ashes and then sifted through the remains to gather up bits of bone that could be kept or sold to tourists. Our more modern American terrorist groups are likewise obsessed with souvenirs of their deeds. One of the thugs who raided Speaker Nancy Pelosi’s office, an Arkansan named Richard “Bigo” Barnett, made a public show of having stolen a letter from her desk. Other members of the mob grabbed furniture, with one terrorist in a Trump hat even making off with a podium.

Finally, we must consider the relationship between the mob and law enforcement. Lynch mobs actually had a very good relationship with the police. Consider the May 4, 1927 lynching of John Carter in Little Rock. One picture of the event shows a policemen at the place where Carter was initially hanged by the mob, and although we cannot determine too much from this single image, he does not seem to be exerting himself against the murderers who surround him. According to some accounts of the lynching, when the mob decided to take Carter’s body to the heart of the black business district of Little Rock, there to burn it, Sheriff Mike Haynie was watching them and made no move to stop them. And when the mob reached their destination and began rioting downtown, the police played cards in their basement and made no move to restore order, forcing the governor to call out the National Guard. Even when law enforcement was not so accommodating to the mob as they were in Little Rock in 1927, we can see certain patterns emerge. Sheriffs post maybe one lone jailer at the county lock-up so that it is easy for the mob to overcome him and take his prisoner. Sheriffs refuse to call the governor for reinforcements even as they are intimately aware of the potential for mob violence. On January 6, 2021, we saw federal law enforcement follow many of these same patterns for the Trump-supporting terrorists in Washington DC. We saw a diminished mobilization of Capitol Police in the face of well-planned mob violence. We saw those police essentially open the gates to the terrorists, take selfies with them, help them down the stairs, and only make a handful of arrests. Just as with the case of John Carter, the National Guard was deployed only when the mob in Washington DC had achieved their goal.

The governor of my state, Republican Asa Hutchinson, made a name for himself in the 1980s as a U.S. attorney prosecuting a home-grown white supremacist terrorist group called the Covenant, Sword and Arm of the Lord (CSA). Among other things, this group wanted to overthrow the government and “purify” the nation of Jewish and non-white influence, especially in the media. However, the rhetoric of the CSA is now the mainstream rhetoric of the Republican Party, a party whose most prominent leaders have been promoting distrust of the mainstream media and urging the violent overthrow of our democratically elected government. About a century ago, it was the Republican Party that was pushing for anti-lynching legislation. Now Republican legislators, such as Missouri senator Josh Hawley and Texas senator Ted Cruz, cheer on those who construct a gallows on the National Mall.

Democracy in America will not come to its death “at the hands of an unknown mob.” We know who the mob leaders are. They are “generally known.” They have been broadcasting their intentions for a long time now.