Austin Sarat is Associate Provost and Associate Dean of the Faculty and Cromwell Professor of Jurisprudence and Political Science at Amherst College. 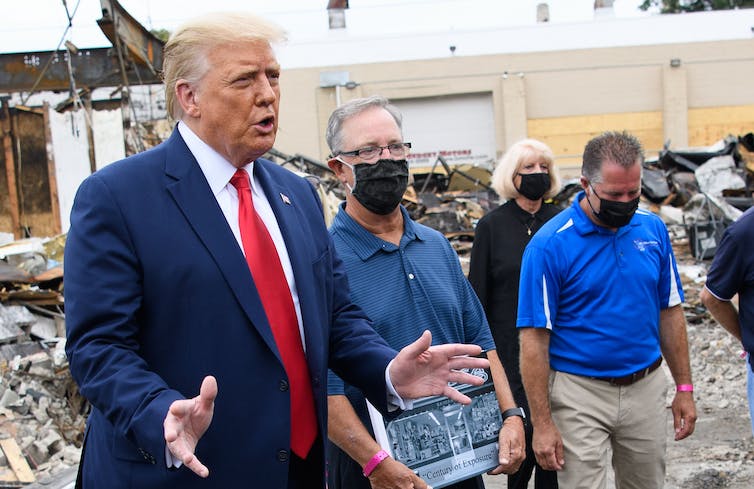 The Republican Party made it clear in its national convention that it intends to make restoring “law and order” central to this fall’s presidential campaign.

As he did when he first ran in 2016, President Donald Trump highlighted law and order in his 2020 acceptance speech.

“Your vote,” Trump said, “will decide whether we protect law-abiding Americans and whether … we will defend the American way of life or allow a radical movement to completely dismantle and destroy it.”

For a student of the politics of law and order, the president’s rhetoric is familiar. It builds on, and borrows from, a strand of thinking running back to the early years of the republic.

Throughout this nation’s history, appeals to law and order have been as much about defending privilege as dealing with crime. They have been used in political campaigns to stigmatize racial, ethnic and religious groups and resist calls for social justice made by, and on behalf of, those groups. 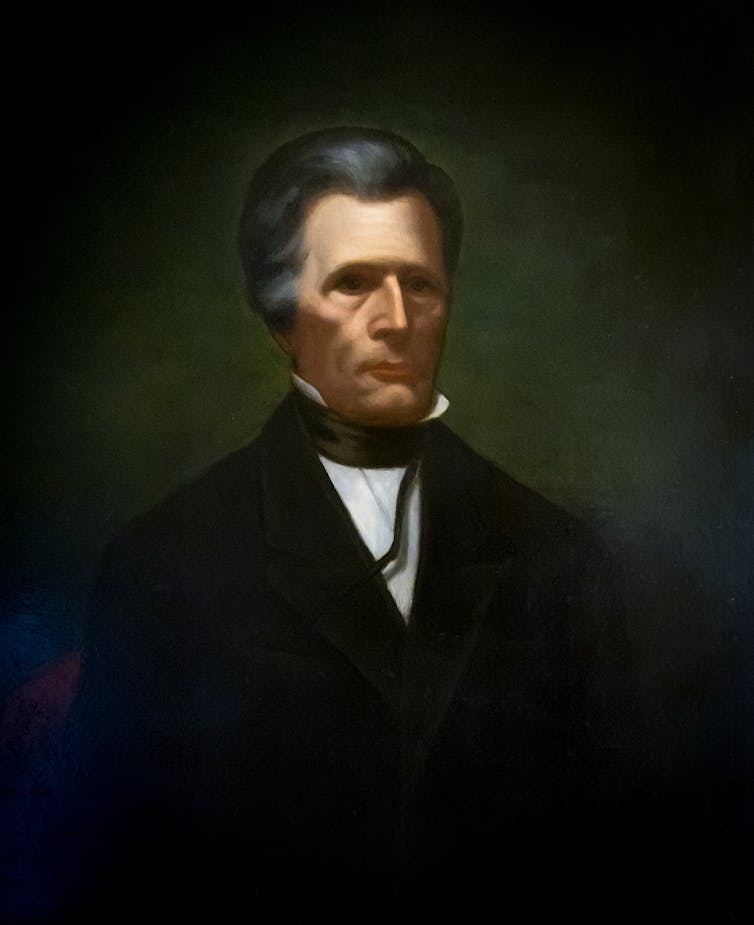 The first stirrings of law-and-order politics in the U.S. occurred in the 1830s in response to agitation for expansion of the vote. At the time, only whites who owned property could vote. Reformers wanted to extend the franchise to all white men.

In 1840 Samuel Ward King, the governor of Rhode Island, formed the Law and Order Party to oppose such proposals. Troubled by an influx of immigrants, his party wanted to preserve the state charter that disenfranchised the 60% of the state’s white, male residents who did not own property.

But the tide of reform proved to be too strong, and in 1843 the charter was changed, extending suffrage to any native-born adult male, regardless of race, who could pay a poll tax of US$1. This change led to the demise of Rhode Island’s Law and Order Party.

Fifteen years later, another Law and Order Party emerged, this time in Kansas. It promoted the cause of slavery, which it claimed was ordained by God. As David Atchison, one of the party’s leaders, said, “We believe slavery is a trust and guardianship given us of God for the good of both races. Without sugar, cotton, and cheap clothing, can civilization maintain its progress?”

Toward the end of the 19th century, law-and-order rhetoric played a key role in the Prohibition movement to ban alcohol. This movement was led by rural Protestants whose political power was being challenged by a growing population of urban, Irish-Catholic immigrants.

As Frances Willard, a prominent leader of that cause, said, “There is a war in America … between the rum shops and religion. They stand over against each other, insurmountable and unalterable foes.”

The politics of law and order remained animated by resistance of social change during the 20th century. While it did not have much political purchase during the early part of the century, the phrase “law and order” was used by Republican Gov. Calvin Coolidge of Massachusetts in a 1920 speech to rally opposition to labor union organizers.

As crime rates rose and urban disorder intensified in the 1960s, the attraction of law and order as a campaign issue grew as well.

In 1964, Republican presidential candidate Barry Goldwater took up the law-and-order banner in his campaign against President Lyndon Johnson.

Goldwater linked the problem of crime with the prevalence of public welfare programs and decried “the growing menace in our country … to personal safety, to life, to limb and property, in homes, in churches, on the playgrounds, and places of business, particularly in our great cities.” 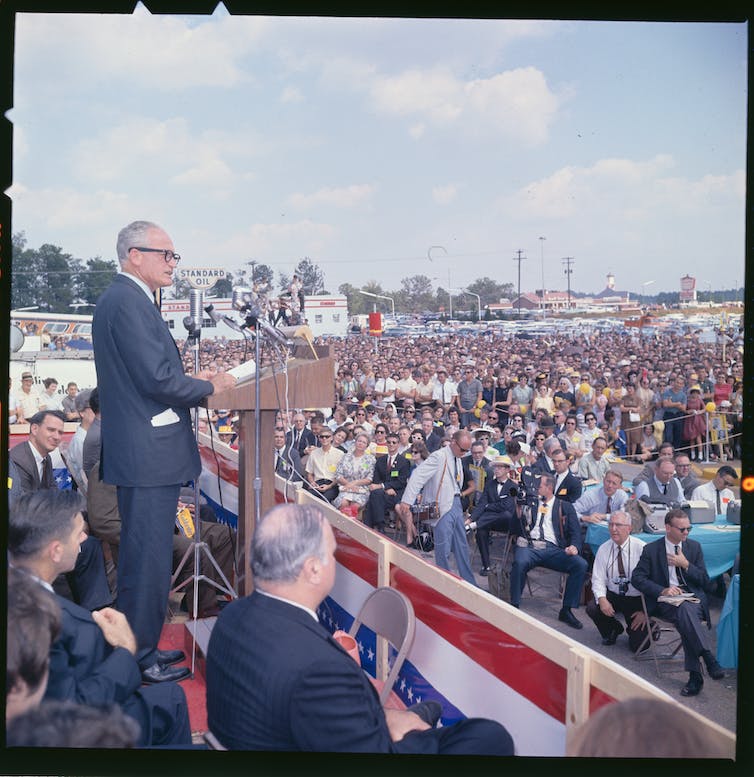 In 1964, GOP presidential candidate Barry Goldwater spoke of ‘the growing menace in our country … to personal safety, to life, to limb and property.’ Getty Images

In 1968, both Republican Richard Nixon and George Wallace, a former governor of Alabama running as an independent, seized on the law-and-order issue in the presidential campaign. Nixon promised, “The wave of crime is not going to be the wave of the future in the United States of America. We shall reestablish freedom in America.”

Nixon made law and order, which some scholars said was a coded racial appeal, a key part of a “Southern strategy” that sought to get Southern Democrats to switch their allegiance to the Republican Party.

In the 1988 presidential race, GOP candidate George H.W. Bush stressed law and order in his campaign against Massachusetts Gov. Michael Dukakis. His criticism of Dukakis was crystallized in the so-called “Willie Horton” ad. Horton had been convicted of murder but was released from prison under a prison furlough program during Dukakis’ tenure – only to commit serious crimes again. The ad featured images of prisoners moving through a revolving door and a picture of an African American man that was clearly intended to refer to Horton.

It was a devastating line of attack, and Bush won the election.

Four years later, Arkansas Gov. Bill Clinton, the Democratic candidate for president, tried to make law and order a pro-Democratic issue. He argued that Bush had not kept his promise to control crime and said, “We cannot take our country back until we take our neighborhoods back.”

But Clinton also took the unprecedented step of connecting law and order and the promotion of civil rights.

“I want to be tough on crime and good for civil rights,” Clinton said. “You can’t have civil justice without order and safety.”

Many accounts of President Trump’s law-and-order campaign trace its roots back to Nixon’s 1968 campaign. But I believe it has an older pedigree, running much deeper into America’s past.

In his mobilization of resentments against immigrants and others who threaten “the American way of life,” the president is very much within the centuries-old tradition of law-and-order appeals.

In another sense, he is inverting modern law-and-order politics. To date, it has been used by challengers in campaigns designed to appeal to people who believe that they are losing ground as society changes.

In 2016, Trump ran just such a campaign. He cited rampant lawlessness and “race riots in our streets on a monthly basis” as reasons to “change our leadership immediately.”

He is again warning of lawlessness and rioting, but this time as a central reason not to change the nation’s leadership.

Democratic candidate Joe Biden correctly highlighted the irony and audacity of that effort by reminding Americans that Trump “keeps telling you if only he was president … you’d feel safe. Well, he is president.”

Austin Sarat, Associate Provost and Associate Dean of the Faculty and Cromwell Professor of Jurisprudence and Political Science, Amherst College