On Labor Day, Think of Bread and Roses 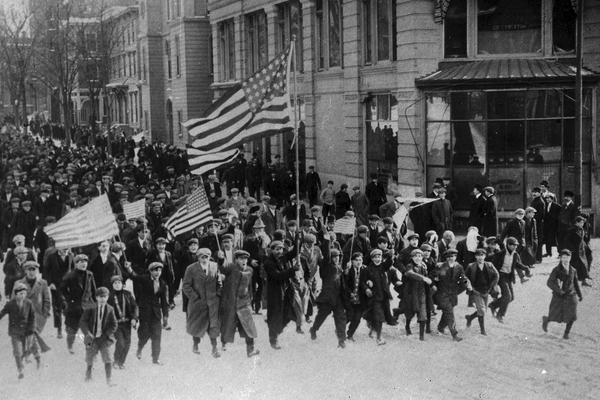 As we celebrate Labor Day and hard-working Americans, let's also think of Bread and Roses. For back in 1912 that’s what inspired laborers in the textile mills of Lawrence, Massachusetts to go on a history-making strike. They stood up for the rights of workers and the poor, ideals we must carry on today.

Many immigrant women and children worked long, grueling hours at the American Woolen company's mills in Lawrence. This was dangerous work in producing fabric for clothing.  One fourteen year old, Carmela Teoli, caught her hair in the machines and was so badly wounded she had to be hospitalized for months.

A small victory appeared to happen for these laborers in January, 1912 when Massachusetts passed a law lowering the working week for women and children from 56 hours to 54. How did management respond? They cut each worker's wages by thirty-two cents to make up for the lost hours.

Thirty-two cents may not seem like a lot of money today, but back in 1912 that made the difference between being able to afford food. The workers in the textile mills lived in poor, cramped conditions and were struggling to get by. When the workers learned of the pay cut it made them furious.

The Bread and Roses Strike of 1912 began, and it spread quickly throughout the textile mills. Over 20,000 workers were organized to protest the low wages and poor treatment. These oppressed workers wanted to be able to afford food for their hard work. But they also wanted respect.

A rallying cry was captured in a poem by James Oppenheim "Hearts starve as well as bodies; give us bread, but give us roses!"

When the public learned of the horrid working conditions in the textile mills, the strike gained even more support.

Representative Edward Townsend of New Jersey saw firsthand the poverty in the homes of the textile workers. Malnutrition was causing a high death rate among infants.

Townsend, in a speech before Congress in March 1912, said "In the City of Lawrence...out of every 100 deaths 47 were of children under 5 years of age.”

As reported in the New York Times, Townsend said "It was hard to believe in some cases that human beings could exist in the conditions I found. In only a score of homes was there anything to eat except bread. The supply of that was, many times, pitifully small."

Hearings were held in Washington and powerful testimony was delivered by Carmela Teoli on her experiences working in the mills. President Taft and Mrs. Taft heard her story and pledged their support.

The American Woolen Company soon gave in to the workers’ demands including increasing wages. The workers had successfully united for justice and human rights. Child labor laws were soon passed to begin protecting youth.

As we celebrate Labor Day, let's remember the struggle for the rights of workers and the poor continue. There are Americans who are working long hours but barely able to get by and still need food assistance. Bread for the World reminds us that 'We cannot end hunger in the U.S. without raising the minimum wage."

According to the World Bank  almost half the world’s population – 3.4 billion people – lives on less than $5.50 a day. Many people, including children, go to bed hungry at night around the world.

We must do more to help the poor. One way is by lifting up the many small farmers around the globe so they can produce more food and becomes suppliers to their own communities. Small farmers in developing countries could become the suppliers to national school lunch programs to end hunger and poverty.

On Labor Day we should be thinking of ways to give everyone a chance to work hard and make a decent living. No one should be left out.

Everyone working to make a better life for their family deserves Bread and Roses too.