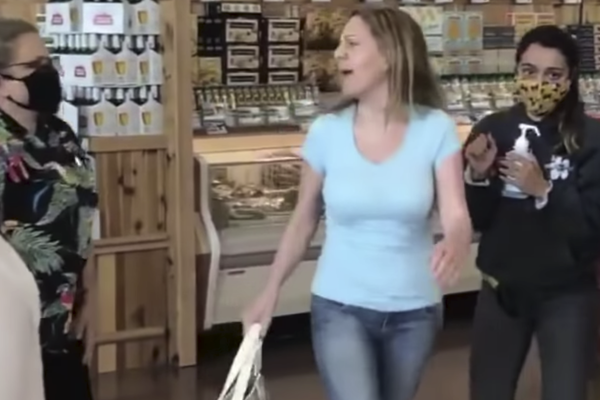 Even if we allow for some discrepancies in counting, there is little doubt that we have done a worse job than most other major countries in preventing the spread of the virus. Why?

The failures of President Trump and his government are one obvious answer, but as New York Times columnist Paul Krugman indicated in his late July column “The Cult of Selfishness Is Killing America,” the “untrammeled pursuit of self-interest” was another factor--though admittedly a less glaring one.

Throughout our history, we have witnessed a stress on self-interest, on freedom bordering on license, on individualism,understood as “a social theory favoring freedom of action for individuals over collective or state control.” How often have we heard statements such as “I have a right to own a gun” or, more recently in our coronavirus year, “I don’t have to wear a mask”? (During the 1918-1919 Flu Pandemic, some members of the San Francisco Anti-Mask League also believed that the city’s mandatory mask order violated their civil liberties.)

Of course, there is much more to the American story than an emphasis on such individualism, nevertheless it has been a strong and consistent influence, much stronger than in most other countries.

Unsurprisingly, the Center for Individualism declares that individualism “was one of the chief ideas that animated the founding of the United States almost 250 years ago.” More objectively, however, historian Clinton Rossiter stated in his The Political Thought of the American Revolution, “Revolutionary thinkers were completely oriented to individualism in their discussions of the purpose of the political community.” In his The First New Nation, political sociologist Seymour Lipset wrote of “two values that are at the core of the American creed—individualism and egalitarianism.” He noted that “Americans believe strongly in both values.” But conservatives tend to stress the first more, and liberals the second. And Lipset thought which value was stressed often alternated from one era to another. Rossiter in his Conservatism in America also observed “the preference for liberty over equality lies at the root of the conservative tradition.”

In the 1830s the Frenchman Alexis de Tocqueville, one of history’s most perceptive observers of America, wrote about U.S. individualism in his 2-volume Democracy in America. He described it as a “feeling, which disposes each member of the community to sever himself from the mass of his fellow-creatures; and to draw apart with his family and his friends; so that, after he has thus formed a little circle of his own, he willingly leaves society at large to itself.” He believed it “saps the virtues of public life; but, in the long run, it attacks and destroys all others, and is at length absorbed in downright egotism.”

Many historians have emphasized the individualism of the Gilded Age that followed the Civil War. Walter T.K. Nugent, in his Progressivism: A Very Short Introduction (2009), noted “the rampant individualism and self-seeking” of that period and contrasted it with the later conviction of the Progressives, who stressed the common good. Richard Hofstadter cited favorably the view of critic Van Wyck Brooks (writing of the Gilded Age and earlier) that “an excessive, rampant individualism had prevented the formation of a collective spiritual life. The pioneering spirit, coarsely bent on acquisition and conquest, had fostered a materialism which was hopelessly opposed to the skeptical or creative imagination.”

The Progressives stress on the common good was followed by the election of three Republican presidents who served from early 1921 to early 1933. They emphasized individualism more than equality. Especially notable was the last of the three, Herbert Hoover, who had served his two predecessors as Secretary of Commerce.

In 1922 his book American Individualism appeared. In it he wrote, ‘Individualism has been the primary force of American civilization for three centuries. It is our sort of individualism that has supplied the motivation of America’s political, economic, and spiritual institutions in all these years. . . . Our very form of government is the product of the individualism of our people, the demand for an equal opportunity, for a fair chance.”

But, according to the Canadian journalist Kenneth Whyte, who in his Hoover biography treats him more favorably than most historians, Hoover was supportive of non-governmental groups like “chambers of commerce, service clubs, trade associations, and labor unions.” And he was not indifferent to the common good, but he preferred voluntary, non-governmental efforts to achieve it. As the Great Depression, which began under him, continued, he opposed government aid to individuals via employment programs or direct payments.

After being badly beaten by Franklin Roosevelt (FDR) in the 1932 election, Hoover strongly opposed FDR’s New Deal policies, which greatly increased the size of the federal government. In 1934 another Hoover book was published, The Challenge to Liberty. In it he wrote, “Not only in the United States, but through­out the world, the whole philosophy of individual liberty is under attack. . . . We have to determine now whether, under the pressures of the hour, we must cripple or abandon the heritage of liberty for some new philosophy which must mark the passing of freedom.”

From FDR’s opponents to Trump’s tweets, many government policies to further the common good have been labeled socialist or unAmerican and a threat to American values. The stress placed on individualism or the common good has varied from president to president, with Republican presidents being more likely to emphasize the former. Gary Wills’ Reagan’s America contains a chapter labeled “Individualism,” and Wills writes of the “individualist Myths” in which Reagan believed. At the end of 2017, the Heartland Institute, in a piece entitled “Freedom Rising under President Trump,” listed more than three dozen of “Trump's direct presidential actions promoting freedom.” During the present coronavirus pandemic, the president has sometimes encouraged his supporters to insist on their “freedoms” against governors whose orders curtail various activities for public health reasons.

Although Trump encouraged protest against perceived infringements of liberties, The New Yorker’s “The Militias Against Masks,” dealing mainly with Michigan opposition (some of it organized by the Michigan Freedom Fund and Michigan United For Liberty), is among much writing that details the pre-Trumpian historical background of such protests.

Among individuals recognizing how U.S. history and culture has impacted our response to the current pandemic is Stanford psychologist and mental health expert Keith Humphreys. In a Washington Post article and Vox interview he has made the point that the distrust of government in the USA “goes back to the very beginning” of our country and is today much stronger than in countries like Germany and South Korea that have coped better than us with the virus. He concludes, “that libertarian streak is with us through everything and it also applies in the domain of health”--the libertarian Cato Institute lists individualism as the first “key concept” of libertarianism.

Both Humpheys and his Vox interviewer, Sean Illing, agreed that our historical emphasis on individual rights has often been a good thing. But, as Illing stated it, the “problem with libertarianism has always been that it gives us a language of rights but it can’t give us a language of obligations—it’s fundamentally an individualistic philosophy.” Humphrey fears that such a philosophy hinders our “need for a sense of shared purpose” in our present pandemic.

Two other writers supporting the above view are The New Yorker’s Adam Gopnik and Canadian anthropologist Wade Davis. The first writes, “To many libertarians . . . social distancing and mask-wearing become, like gun control, an imposition on liberty.” The second adds, “The American cult of the individual denies not just community but the very idea of society. No one owes anything to anyone.”

Often accompanying American individualism is the belief that any individual’s opinions are as good as anyone else’s, even an expert--in the case of some Trump supporters especially of experts if they are of the intellectual type. Witness, as historian Richard Hofstadter’s Anti-Intellectualism in American Life (1962) once did, the U. S. antipathy or lack of respect toward intellectual authorities. Today that would include not only public intellectuals, but also climate-change experts and public health officials.

In a chapter on “Values” in his The Audacity of Hope, the pre-presidential Barack Obama stated that “the value of individual freedom is so deeply ingrained in us that we tend to take it for granted,” and “we are individualistic at heart.” But he also argued that freedom needed to be restrained by other values, especially ones that emphasize our communal responsibilities.

FDR realized this in early 1941, when England was facing a Nazi Germany that had conquered much of Western Europe. In a speech in which he spoke eloquently of “four essential human freedoms” he also stated, “We must prepare, all of us prepare, to make the sacrifices that the emergency . . . demands. . . . A free nation has the right to expect full cooperation from all groups” in a time of crisis.

For a very brief time in March 2020, it seemed possible that President Trump realized the USA faced a crisis similar to that of WWII. He even compared the two crises, said he thought of himself as a “wartime president,” and talked of the need “to make shared sacrifices for the good of the nation.”

But then in April, when right-wing groups protested their Democratic governors’ pandemic restrictions, Trump could not resist. And to libertarians’ delight, he posted three tweets endorsing the so-called liberation of a trio of states with Democratic governors from measures they had taken to slow the spread of coronavirus. One tweet read “LIBERATE VIRGINIA, and save your great 2nd Amendment. It is under siege!” (Exactly how the 2nd Amendment, relating to the right to bear arms, was relevant was not clear.) His two other tweets read “LIBERATE MINNESOTA!” and “LIBERATE MICHIGAN!”

The great African fighter for freedom, Nelson Mandela, once said that freedom involved not just casting off “one's chains,” but also living “in a way that respects and enhances the freedom of others.” In our current pandemic, where exercising our “freedom” to go unmasked can endanger not only others’ freedoms but their very lives, those are words worth remembering.