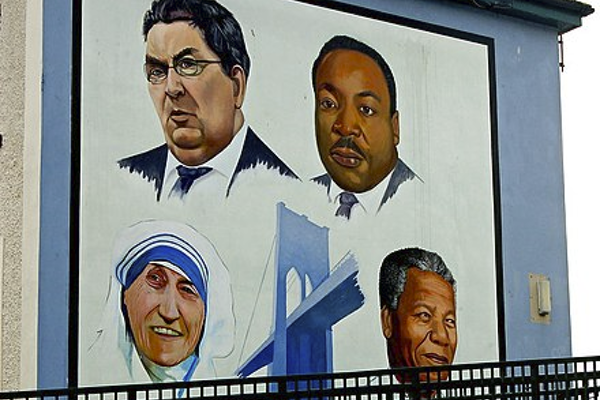 As the United States continues to mourn the loss of our great Civil Rights hero John Lewis, the island of Ireland now faces a similarly monumental loss of a national hero in the death of John Hume on August 3rd. Hume was a leader of the Catholic Civil Rights movement, a former leader of the Social Democratic and Labor Party (SDLP), and the principal architect of the Good Friday Agreement that eventually brought peace to Northern Ireland. Like John Lewis, Hume was fortunate to see parts of his vision come to life; also like Lewis, Hume’s vision remained incompletely realized upon his death. To help understand Lewis’s continued legacy, we should take the time to also remember Hume’s life and the lessons we can learn from both of these extraordinary men.

To understand the what spurred Hume’s work, we must understand what he was born into: Hume grew up in Northern Ireland’s Catholic community in Derry/Londonderry at a time when Catholics in Northern Ireland faced significant discrimination in terms of voting rights, housing, and public and private sector employment. The state of Northern Ireland was created in 1920 in order to protect a majority-Protestant population from the allegedly discriminatory Catholic population in what started as the Irish Free State and later became the Republic of Ireland. The original Northern Ireland parliament gerrymandered voting districts in order to enshrine a Protestant majority in government that was larger than would have been reflected by the population, which was approximately two-thirds Protestant in 1920. In addition, because many Protestant employers and property owners believed that Catholics were “disloyal,” they often refused to hire or rent homes to Catholic applicants.

After decades of this systematic oppression, Northern Ireland’s Catholic population emulated the Black Civil Rights Movement in the United States in its own fight for equality. Hume was a key figure in this movement. He famously confronted British Army soldiers on Magilligan strand during a march against internment without trial just days before Northern Ireland’s Bloody Sunday in January 1972. Lewis, too, was often found at the forefront of marches for Black Civil Rights, suffering a serious head injury at the hands of Alabama state police as he, Martin Luther King, and hundreds of others crossed Selma’s Edmund Pettus Bridge on a different Bloody Sunday in 1965.

Hume carried his vision of a peaceful society based on equality and respect for differences from the streets and into the halls of Parliament, where he served as an MP for Derry for three decades. Behind the scenes, Hume was a key architect of Northern Ireland’s peace process. He met secretly with Gerry Adams, then the leader of Sinn Féin and a member of the Irish Republican Army’s Army Council, in an effort to persuade the paramilitary organization into pursuing its goals without violence. At the same time, he worked tirelessly to build support for his vision in Belfast, Dublin, London and, crucially, Washington, D.C. These efforts culminated in 1998, with the signing of the Good Friday Agreement, a peace settlement that ensured equal representation for Catholics in the government of Northern Ireland. Along with his Unionist counterpart David Trimble, Hume was awarded the Nobel Peace Prize for his work on the accord.

John Lewis and John Hume both had the opportunity to see significant parts of their vision come to life. Yet, parts of each man’s vision remain unfulfilled. Lewis lived to see the people of the United States elect its first Black president--and long enough to watch the US elect a racist who is monomaniacal about erasing Obama’s legacy; Lewis died in the midst of ongoing protests against police violence toward Black people. Hume, too, died without seeing a major part of his vision realized: Ireland remains a divided island and Northern Ireland still sees flashes of sectarian violence, as in the murder of Lyra McKee in April 2019.

Hume and Lewis shared a vision of a world in which all people are viewed as equals under the law and are treated that way by their fellow citizens. Both Northern Ireland and the US have made meaningful strides in key areas of voting, housing, and employment. Still, the Covid-19 pandemic, the murder of George Floyd, and ongoing paramilitary violence Hume’s hometown of Derry/Londonderry have revealed how far we have to go. As we remember Hume and Lewis, we should find inspiration to continue their struggle.