John R. Legg is a Ph.D Student at George Mason University studying the memory of the U.S.-Dakota War. He serves on the staff of H-CivWar and is an affiliate editor for the National Council on Public History’s History@Work blog. @TheJohnLegg. 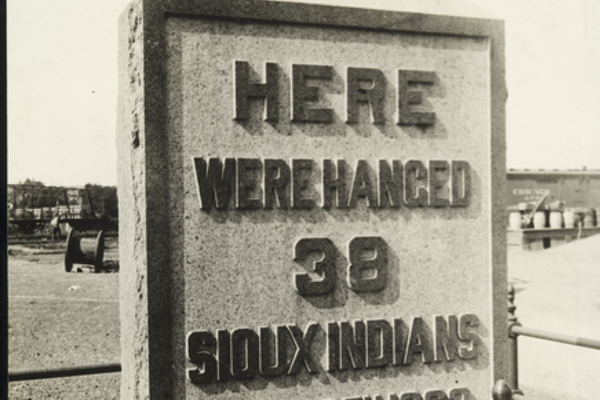 In the wake of the George Floyd Murder and protests in Minneapolis, Minnesota members of the American Indian Movement (AIM) toppled a controversial monument to Christopher Columbus in St. Paul, Minnesota, signaling a new way to engage with inaccurate representations of the American past. While many believe that monuments serve as a form of public history and that their removal "erases history," the removal of statues demonstrates how communities of color and their allies no longer tolerate narratives of American exceptionalism that suppress questions of racism, slavery and conquest.

In fact, Minnesota's history projects similar debates over the state's founding and the methods by which white settlement grew and dominated that state's landscape. The U.S.-Dakota War, one of Minnesota's most defining events, connects debates between the memory of the Civil War and colonialism. As public histories of these two divergent events often suppress racism or enact the erasure of Indigenous peoples, they represent the power cemented in monuments. Not only to celebrate a figure or event, but to also dominate the historical narrative future generations may learn from.

By 1912, many white citizens of Mankato, Minnesota eagerly yearned to commemorate the largest mass execution in U.S. history. Fifty years earlier, thirty-eight Dakota men were hanged from a large scaffold in downtown Mankato for their participation in the short-lived U.S-Dakota War. President Abraham Lincoln ultimately lowered the initial number of the condemned from 303 to thirty-eight, both to appease white settlers demanding justice and avoid sparking a continuation of hostilities between Indigenous communities and white settlers in Minnesota and throughout the Northern Great Plains. The “Hanging Monument” represented an “end” to the Dakota War through the recognition of federal power in controlling not only Indigenous peoples but the histories inclusive of their culture and experiences in resisting America’s settler colonial ambitions.

The Hanging Monument, an 8,500 pound memorial made of local granite, commemorated the mass execution near the original site. The austere face of the memorial read: "Here Were Hanged 38 Sioux Indians: Dec. 26th, 1862." Judge Lorin Cray, one of the monument's supporters and financial benefactors, insisted to one newspaper that the memorial told the story of a historical event in Mankato and did not seek to demean the Indigenous peoples which it supposedly represented. The celebration of white law that ended the bloody U.S.-Dakota War, as well as the lack of context given on the monument’s face, enacted a continuous silencing and erasure of Dakota people from that history. The monument thus reassured the white citizens of Mankato that they were safe again, while at the same time promoting the reach of local and federal power and law. For many years, the Hanging Monument represented an object for outside visitors to see. It was a celebration that their town served as the platform to end the Dakota War. The city would forever be known as the place that hosted the hanging of the Dakota 38.

Between the 1950s and 1970s, many activists demanded the removal of the monument. In some cases, the memorial had red paint poured over its face or was doused with gasoline with the hopes that it would burn. Yet, despite the City of Mankato moving the monument away from the hanging site and further out of the public's eye, the Hanging Monument remained deeply engrained as part of the town. By 1971, Mankato State College (now Minnesota State University, Mankato) hosted an annual Social Studies Conference. That year AIM leaders spoke to a full audience of educators, activists, and the Bureau of Indian Affairs about the plight of the American Indian. One, Edward Benton, acknowledged that the Hanging Monument continued to cause emotional pain to not only the Dakota community, but all Native Americans. He demanded changing the inscription to "Here Were Hung 38 Freedom Fighters," or he could not promise it would still be standing after the conference concluded. Months after the meeting, the monument was removed and hidden from the public's eye to rid the town of its inconvenient past. Yet, the removal was not only because of the activism sparked by AIM and their allies.

As the American Revolution Bicentennial celebration commenced, many white Mankatoans pushed the city to be recognized by the American Revolution Bicentennial Commission as an "all American town." They needed the dark shadow of the mass hanging to disappear forever, hoping to replace it with other famous history or figures from Mankato's past. One Mankato citizen urged the city to recognize Maud Hart Lovelace and forget the negativity that had long brewed over the mass hanging of the Dakota 38.

The Bicentennial, then, represented, in an Indigenous inflection, what historian Edmund Morgan has called the "American Paradox”: a celebration of America's founding while at the same time ignoring the horrors that many enslaved peoples faced under bondage. In Mankato, that paradox celebrated America's great founding and the campaign of manifest destiny that both displaced Dakotas and all Indigenous peoples and erased them from that historical narrative. When many Mankatoans urged hiding the monument, this represented a second erasure of the historical narrative to conceal the town's participation in larger settler-colonial ambitions. After removing and replacing Indigenous peoples with a settler society, concealing a monument to that removal denied an entry point to the public debate for those communities’ narratives, stories, and experiences.

The Hanging Monument disappeared in the 1990s when city officials moved it from a city parking lot to an undisclosed location. Publicly, no one knows where the monument presently resides. Its story though, offers a clear avenue to understand present contestation over historical monuments better. This monument connects the Civil War era with America's broader ambitions in colonizing Indigenous lands. And, both while it stood and when its presence became inconvenient, the Hanging Monument shows how memorials control historical narratives and elevate particular interpretations of the past.