David Marks is an investigative reporter and veteran documentary filmmaker, having produced a number of films for PBS and the BBC, including Nazi Gold, questioning the neutrality of Switzerland in WWII. 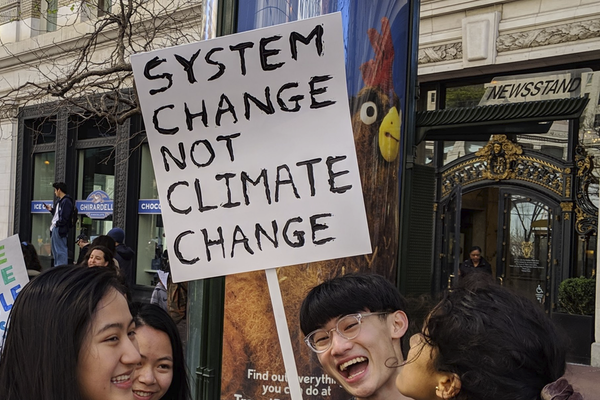 People from all cultures, in every walk of life, rely on stability. As much as possible, we form patterns and habits that are oriented towards keeping things the same. Regularity is an integral element of survival.

Dramatic change holds inherent risks, and refraining from acting impulsively is usually a good instinct. When we take the time to consider our options and make sober decisions, we are ensuring that our actions are made with gravitas.

This tendency also means that we sometimes hold on to self-destructive habits or tolerate inequitable situations, individually and collectively. We also can see a new problem arising, or a long-standing issue, but do not take action because it requires leaving behind a comfortable routine.

Often it takes converging events to demand change or justice. As we consider the future, the coronavirus pandemic and the response to the murder of George Floyd present critical issues related to each other.

We have had to rely on government honesty, support and protection through the first part of this year because of a virus. Decisions for our well-being have been made for us, and we have sacrificed freedoms at the insistence of our leaders. Then, right before our eyes, we witnessed a horrendous crime, reminding us graphically how law enforcement continues to abuse Black Americans. These same policemen were enforcing curfews for our safety, in the name of government, for months before this murder.

In the wake of this crime, we have seen how some police officers have openly used violent and inappropriate tactics in the name of quelling disorder. Clearly, abusive policemen are in a minority, but events continue to prove the actions of many are supported by a system of social control that has failed to solve problems and is structured to suppress dissent.  This continues because there are political leaders who see peaceful protest as chaotic and criminal, only because it is a challenge to their preferred ordering of society.

The demonstrated self-interested behavior of the administration in response to recent events has certainly made us aware of which leaders are committed to acting in the public interest—the whole public—and those who aren’t.

The blatant partisanship of some political leaders, and its effect, is exposed on a daily basis. For example, President Trump reveals he has no interest in working on the social issues that still plague the United States, and arguably he has reinforced them. And his response to the pandemic shows his preference for economic stability and his own political survival over the need to face medical realities.

The Trump administration had also cut funding for pandemic preparedness and discounted the impact of the coronavirus as it began.

Delay in tackling difficult issues or acknowledging danger, whether from lack of initiative, greed or prejudice, is outrageous and unforgivable for a leader holding the public trust.

The president’s decision to stop U.S. funding of the World Health Organization has nothing to do with its effectiveness, and all to do with his personal gripes and frustrations. And without facts or foundation, Trump continues to minimize the risks of prematurely ending the precautions we have taken to slow the spread of the virus.

Trump represents a number of world leaders who focus on power and profit at all costs. They reveal their narrow self-interests and blindness to the common needs of our human family.

The current lack of qualified leadership should awaken us to another looming threat on the horizon. As with the unpreparedness for pandemics, and blindness to the violence, bias and repression that faces Black Americans, there is also little concern for the coming global crisis of an order that will have an unprecedented effect on everyone.

The violence repressing protesters is only a small preview of what we’ll get if and when our society faces famine and drought, refugee migration, another pandemic and/or economic dislocation from an unprecedented climate crisis. Even though the United Nations has presented the undeniable connection between health, social justice, and ecological destruction, most governments, including ours, remain oblivious to this three-pronged threat.

Environmental degradation is no secret; it has been consistently predicted and described by a vast number of scientists who have been observing the planet’s condition over many decades.

Yet the pattern of ignoring key social issues and environmental crisis until they become explosive and intractable, goes on.

Even as the virus continues to rage, President Trump attempts to reverse sound policies that emanated from research connecting pollution to serious disease. He has revealed himself to be inept and dangerous in handling every challenge of his administration, and along with a team of climate change deniers, he is allowing continuing degradation of the planet.

A critical juncture has arrived.

If global warming and atmospheric pollution are not confronted immediately, they will not recede until the planet is unrecognizable. If we wait much longer, belated disaster plans or trillions of dollars will have zero effect in combatting future violent storms, severe droughts, and rising oceans.

If gargantuan funding relief can be found in response to a pandemic, it is also possible to secure a world superfund to reverse global warming. That must happen very soon.

However, financing is secondary to the attitude change necessary to provoke the industrial and social transformations that will stop the continuing destruction of the Earth’s ecological foundations.

As the current health threat recedes, even with our new perspective on contagious disease, there will be a natural temptation for us to fall back into a false sense of security and return to comforting patterns. There are many people who are still at risk of dying as the virus still spreads.

And as the initial response to the killing of George Floyd subsides, even if there are changes to laws and attitudes that support the struggle of Black Americans, the battle is yet to be won against racists; their political interests will resist anything that represents significant reversals.

However, without question, if the environmental policies and economics of the most powerful governments in the world remain unchanged, we will continue to virtually ignore the imminent danger, allowing the destruction of the planet’s ecosystem.

With this in mind, the heavy-handed police response to protesters presents a dire warning. Much of the planet’s political leadership, in league with its economic elite, will seek to maintain the economic status quo at any cost, and without concern for human degradation and suffering by any cause. Repressing all protest is a high priority.

In the wake of the pandemic, the suppression of peaceful protest of routinized police violence against Black Americans, is an early symptom of the “new normal.” It is an intolerable syndrome that requires recognition and a powerful antidote.

Monarchies, theocracies, and dictatorships have initiated horrific events and wars in the distant and recent past. Yet the growing presence of an elite global oligarchy, integrated within democracies, determined to thwart ecological revitalization, is the most dangerous situation the planet has ever faced.

And the greatest fear of the powerful forces unwilling to embrace the necessary environmental changes is huge uncontrollable public protests.

Over the course of history, in seeking basic needs and a peaceful life, humans have demonstrated flexibility and incredible ingenuity, particularly in times of crisis. It usually involves innovative thinking, and often, revolutionary adaptation.

Yet returning to the comforting stability of daily routines is possible only with a global awakening to the destructive spiral that has begun, There is a need to immediately modify our relationship to the Earth, and as importantly, to each other, or the consequences will be dire.