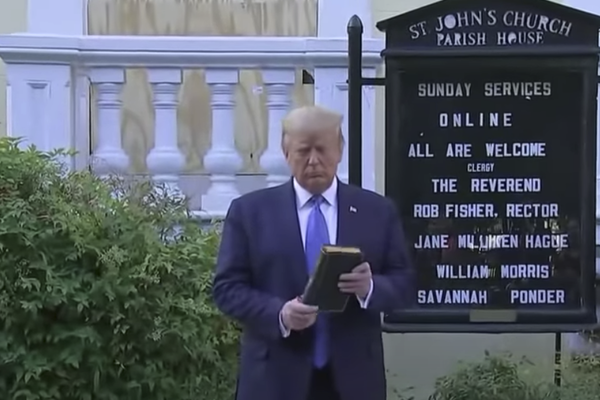 The recent death of George Floyd due to having a policeman’s knee on his neck for almost nine minutes, and the mayhem that followed, remind us of one of the reasons Donald Trump was elected president--racism. The title of The Nation’s article “Economic Anxiety Didn’t Make People Vote Trump, Racism Did,” may be too simplistic, yet racism and anti-immigrant feeling did help elect Trump. In mid-2016 writer George Saunders recognized “Trump’s racist and misogynist excesses,” and thought that many of his followers suffered from what he calls “usurpation anxiety syndrome,” which he defines as “the feeling that one is, or is about to be, scooped, overrun, or taken advantage of by some Other with questionable intentions.” Opposition to decades of affirmative action and growing multiculturalism was rife among Trump supporters.

He received a greater percentage of support in small towns and rural areas than in large cities. An early 2017 Washington Post-Kaiser Family Foundation survey found that “the largest fissures between Americans living in large cities and those in less-dense areas [including rural communities] are rooted in misgivings about the country’s changing demographics and resentment about perceived biases in federal assistance.” Furthermore, “rural residents are nearly three times as likely (42 percent) as people in cities (16 percent) to say that immigrants are a burden on the country,” and rural whites were much more likely than urban whites to believe that “whites [are] losing out because of preferences for blacks and Hispanics.”

In 2016 voters faced a choice whether to continue on the road of improving what Frederick Douglas called a “composite nation,” one that takes pride in its ethnic and religious diversity or, as Trump and many of his followers desire, retreating to an America where whites attempt to maintain maximum power. In 2020, voters will face a similar choice.

Besides racism and “usurpation anxiety,” at least six other prominent factors helped Trump get elected--and could aid him again in 2020.

1: Too many of us are stupid. As former HNN editor Rick Shenkman concluded in Just How Stupid Are We? (2009), we are “pretty stupid.” He cites numerous examples that led him to conclude “that there is damning, hard evidence pointing incontrovertibly to the conclusion that millions are embarrassingly ill-informed and that they do not care that they are.” It is also no coincidence that education, more than income, predicted support for Trump among white Americans. In the 2016 election (according to a Pew Research Study based on exit polling), “Trump’s margin among whites without a college degree is the largest among any candidate in exit polls since 1980. Two-thirds (67%) of non-college whites backed Trump.”

2: We insufficiently value knowledge, facts, and science. In fact, many citizens are openly anti-intellectual. Over a half-century ago, historian Richard Hofstadter pointed this out in his Anti-Intellectualism in American Life. Heacknowledged that many of the Founding Fathers were intellectuals: “Sages, scientists, men of broad cultivation, many of them apt in classical learning . . . [they] used their wide reading in history, politics, and law to solve the exigent problems of their time.” But this noble beginning faltered with the presidency of Andrew Jackson in the early nineteenth century: “The first truly powerful and widespread impulse to anti-intellectualism in American politics was, in fact, given by the Jacksonian movement."

In the decade before Hofstadter’s book appeared, some voters thought that a major defect of Democratic candidate Adlai Stevenson was that he was an “egghead.” As Hofstadter indicated, some right-wingers slapped the label on a person perceived to be “of spurious intellectual pretensions, often a professor or the protégé of a professor. Fundamentally superficial. Over-emotional and feminine in reactions to any problem.” Stevenson’s opponent, General Dwight Eisenhower, was considered more down-to-earth. A similar perception aided George W. Bush against Al Gore and John Kerry, and Trump against Hillary Clinton. Bush (Jr.) and Trump were the guys “you’d rather have a beer with”--as crazy as such a presidential-qualification test as that might sound.

Hofstadter noted that anti-intellectualism was more common among evangelicals than most other religious believers, and white evangelicals have been among Trump’s strongest supporters.

Scientific denial is also stronger among evangelicals, for example, in regard to evolution, than among the U.S. population in general. Trumpsters were also more likely to deny the importance of human-caused global warming, which scientists overwhelmingly believe is scientifically proven.

Anti-intellectualism has merged with an increasing disrespect for experts, a trend that has been exacerbated by the development of social media. In her book These Truths, historian Jill Lepore quotes conservative talk-radio host Rush Limbaugh as saying in 2009 that “science has been corrupted” and…. “Academia has been corrupted. None of what they do is real. It’s all lies!” More recently, David Remnick, editor of The New Yorker, wrote, “Trump’s [coronavirus] failure is rooted in a distrust of expertise, which has led him to rely on the dubious counsel of his circle of cronies and family members.

3: We have insufficiently valued the need for government to restrain capitalism. From 1890 to 1914 U. S. Progressivism developed in order “to limit the socially destructive effects of morally unhindered capitalism, to extract from those [capitalist] markets the tasks they had demonstrably bungled, to counterbalance the markets’ atomizing social effects with a countercalculus of the public weal [well-being].” After three Republican presidencies from 1921 to 1933, Franklin Roosevelt revived the progressive tradition. Since his death in 1945, we have seesawed from a progressive to a less-restrained-capitalist approach, with Presidents Reagan and Trump (by background a businessman who wished to evade any government regulation) being the most favorable to the latter method. The conservative idea that big government is bad was gaining strength leading up to Trump’s election in 2016.

A popular economist with the Reagan administration of the 1980s was Milton Friedman, who once wrote, "The social responsibility of business is to increase its profits." When asked at the end of the century whether he would keep or eliminate fourteen U. S. cabinet departments, he responded he would eliminate most of them, including those overseeing commerce, education, energy, and labor.

Trump’s deregulation of capitalism is best illustrated by his rollbacks of environmental regulations, which The New York Times estimates as 66 completed and 34 in progress. The danger of insufficient government action, including regulation, has been demonstrated over and over again, most notably in recent years by the opioid and Coronavirus crises.

4: We have made celebrities of too many people unworthy of our attention. In 1985, Neil Postman’s Amusing Ourselves to Death claimed that TV was turning public life into entertainment. Twenty years later, in an introduction to a new edition, his son Andrew argued that all the new media since then had just accentuated the trend. In a December 2016 article in The Nation, “All TV Will Be Trump TV,” Leslie Savan wrote that “Donald Trump’s unique relationship to the media has often been noted. He is both its creature—tabloid cover model, star of The Apprentice, cable news and Twitter addict—and a master media manipulator…. He is the culmination of everything that commercial television produces and depends upon: celebrity, a short attention span, enough dramatic conflict to reliably “deliver eyeballs” (yours) to advertisers, and the ad language of puffery. It’s understandable that some Trump voters weren’t bothered by the wild exaggerations and lies; that’s the commercial world we all grew up in.”

In 1882 the English poet and critic Matthew Arnold wrote in his Culture and Anarchy that culture should draw us “ever nearer to a sense of what is indeed beautiful, graceful, and becoming” and help us to appreciate such higher things. Those aims, however, were far from being central to the imbibers (or creators)of twenty-first century U. S. popular culture.

5: We have overvalued the sensational, the shocking, and the new as opposed to such traditional values as humility, wisdom, patience, and tolerance. Modern media, including social media, have exacerbated this trend. Already in the 1950s and 1960s, as a Smithsonian Magazine article observed, talk-show host Joe Pyne “set the tone for so much of what we see on our ‘news’ channels every day and night. The confrontation, the anger, the yelling…. A charismatic bully in a jacket and tie, he grilled hippies, Black Panthers, “pinkos,” “fairies” and “women’s libbers,” practically inventing the attack interview.” In many ways, he was the forerunner of such right-wing favorites as Rush Limbaugh (awarded a medal of freedom by President Trump in 2020) and Bill O’Reilly.

In 2005 Democratic Congressman David Price (N.C.) noted: “Humility is out of fashion these days. Political leaders, advocates, and pundits often display an in-your-face assertiveness, seeming to equate uncertainty or even reflectiveness with weakness and a lack of moral fiber.” In the last fifteen years, as Lepore stated in These Truths, social media have increased this assertiveness and strengthened “polarization on both the left and the right.”

6: We failed to unify against the great danger a Donald Trump presidency could do to our country--just his environmental and coronavirus policies alone have done irreparable harm. If all those who voted third-party had instead voted for Hillary Clinton--granted a candidate with flaws of her own--she would be president today. A similar danger awaits in 2020.

The above list is just a partial explanation of how our nation elected such an unsuitable person as Donald Trump to the presidency. As I used to tell students, one historian might list four main reasons for the beginning of World War I, another historian five or six. And both could be right. Historical events like the beginning of wars or presidential elections are terribly complex events, and the best historians can do is present incomplete truths to describe such multifaceted realities. No doubt HNN commentators can provide additional insights.

Finally, our national defects are only part of the U. S. story. The nation that elected Trump also elected Washington, Lincoln, Franklin Roosevelt, and Obama, and celebrates Martin Luther King Day. Which USA triumphs in November 2020 is yet to be determined.