50 Years After Kent State: Four Deaths Shocked a Nation and Thrust Me into Student Activism 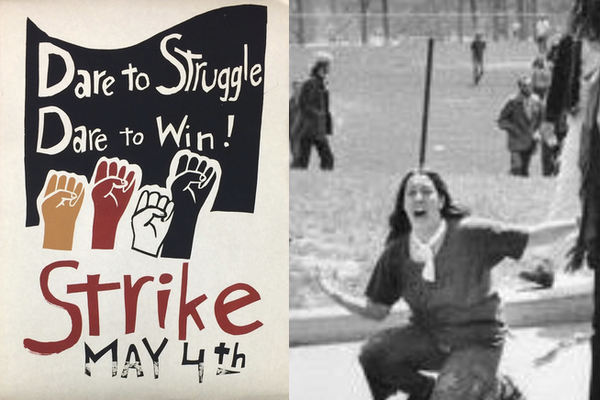 We’re finally on our own

This summer I hear the drumming

On May 4, 1970, the nation was plunged into mourning after four students were gunned down by National Guard troops at Kent State University in Ohio. The images of the fallen students dominated TV news programs and the tragedy spurred massive protests at hundreds of campuses around the nation.

Fifty years later, with virtually all our college campuses closed and a virus death count of some 50,000, it is hard to imagine that four deaths would trigger such a huge reaction.

There had been many campus protests against the Vietnam War before, of course, but never had soldiers fired without warning into a crowd of students, killing four instantly. This outrage motivated tens of thousands of students, including me, to engage in a new round of protests and defy the orders of governors and university officials to stay home and stay quiet.

Four factors led up to the tragedy and the overwhelming public response.

1. Nixon’s invasion of Cambodia. The Kent State students were protesting Nixon’s invasion of Cambodia, announced on April 30. He had ordered the sudden (and ultimately futile) assault without Congressional approval. Nixon had campaigned for president on the promise of ending the Vietnam War and of restoring national unity (e.g. “he will bring us together”). In one awful blow, he had widened the war and further divided the nation.

2. The demonization of student protestors by many Republican politicians. In his presidential campaign, Nixon had repeatedly denounced student protestors as “bums.” One of Ronald Reagan’s key promises in his 1966 gubernatorial campaign was to “clean up the mess at Berkeley.”  In February 1970, Reagan mobilized the California National Guard to crack down on a week-long protest at U.C. Santa Barbara and warned at a news conference that “if it takes a bloodbath, so be it.”

In a May 3 news conference, Ohio Governor James Rhodes announced he was sending his state’s National Guard to stop the demonstrations at Kent State and called student protestors “worse than the brownshirts.”

In one awful volley of rifle file on May 4, it was shown that words do have consequences and that too often it was the innocent who paid the price.

3. The event was fully captured on TV. In era before cable news, the three broadcast networks dominated the public’s news diet. Their evening news programs highlighted the deadly sequence of the soldiers lowering their rifles and firing directly at the students.  A moment later, the crumpled bodies of the students were seen.

Crosby, Stills, Nash and Young, a supergroup at the height of their success, quickly recorded a hard-rock elegy to the students, “Ohio.” Its refrain was “four dead in O-hi-o.” Released in June, the record hit the top 10, thus lodging the event deep in the nation’s psyche.

4. The victims came from white, middle-class families. The nation had seen National Guard troops deployed in the urban riots of the 1960s, but they had sent to contain black and brown residents of the inner city. This time, troops had opened fire on white students in an Ohio suburb. When two of the students’ parents appeared on TV, they sobbed and wondered aloud why it happened. They represented, in effect, middle-America, the great bellwether of American opinion. No politician could afford to ignore their outrage.

My Turn to Protest

In May 1970, I was an English major obsessed with Hemingway and Fitzgerald and holding a part-time job in the school library. I had never participated in a campus demonstration, but the deaths of the four students, who were just my age, spurred me to join a protest that closed down my college.

My school, the College of San Mateo, like most community colleges, was anything but a hotbed of student activism. Nursing and engineering were popular majors. All of the students commuted to school and most worked part or full-time, so few were inclined to join political protests.

But on Thursday, May 7, 1970 a storm was brewing. I joined a group of 60 students (out of a student body of 6,000) meeting in the school cafeteria. We had a particular grievance: the day before, Governor Reagan had closed California’s universities and state colleges for a four-day “cooling-off period,” but he kept the junior colleges open.

Eddie Higgins, a wiry, bearded Vietnam War veteran, was one of the event organizers. He jumped up on a Formica dining table to kick-off the rally.

“Reagan thinks he can ignore us,” Eddie called out. “He thinks the community colleges don’t matter, that the students don’t think for themselves.  Well, we’re going to show Reagan that we do matter. We’re going to shut this f***** down,” he yelled out to whoops of enthusiasm.

Eddie told us that it was time to take “direct action.” He detailed our next steps: we would each proceed to our next scheduled period, then stand-up in front of the class and announce that we were closing the campus in honor of the dead at Kent State.

Inspired, we followed him out of the low, concrete building and into the summer sunlight. As I peeled off and headed up a set of steps to my first class, doubts began to cloud my mind. Disrupting a class was serious; it went against everything I’d been taught in a lifetime of schooling. Could I be arrested? What if I was suspended or expelled? The only thing keeping me from being drafted into the Vietnam War was my student deferment.

I then thought of the many civil rights protests in Alabama and Mississippi that I’d seen on TV. Those men and women had marched knowing they would be clubbed and jailed. Hell, I was just a white kid at a crumby junior college, but I had been called to action. I would do my part.

The next thing I knew I was inside one of the two-story, white brick classroom buildings. I entered room 212 where my French class was already underway. I strode to the front of the small classroom and stood in front of two dozen, puzzled students.

“I’m sorry, but this class is cancelled,” I announced. The teacher, Monsieur Boyer, a balding, middle-aged European man who always dressed in a suit with a silk pocket handkerchief, stood back.

There was a long pause, but then a dozen students silently folded their notebooks and left the room. A few others held back, waiting to see what would come next. One male student stood up to protest. “Hey, I paid for this class and I want it to be held,” he said.

For the next ten minutes I debated with him about the Kent State tragedy, the Vietnam War and Nixon’s invasion of Cambodia. Mr. Boyer stood arms crossed, but said nothing. Through the windows I could see students streaming out of the next building.

The protest was working!

A few minutes later a college dean came on the public address system to announce that the campus was now officially closed.

I left the building and walked towards the main parking lot where a line of cars waited to exit. I felt elated. My first “direct action” was a success. Our voice was heard. We had stood up to Reagan and Nixon.

Those feelings were short-lived. The following Monday the campus was peaceful and we were back in class as if nothing had happened.

The remainder of 1970 seemed to unfold in slow motion. Although the CSN&Y song had urged us to “hear the drumming,” none was forthcoming. No more large-scale protests took place. Instead, Congress held an endless series of hearings on the Cambodian invasion.

The year proved to be the annus horribilis of rock and roll: the Beatles broke-up in May, Jimi Hendrix and Janis Joplin both died of an overdose in the autumn and Jim Morrison succumbed six months later.

Although we could not know it at the time, the Kent State tragedy did mark a turning point in the Vietnam War and in university relations with student activists.

In the next few months, Nixon quietly ended the invasion of Cambodia and accelerated the withdrawal of U.S. troops from Vietnam. The troop level dropped from 500,000 in 1969 to less than 100,000 by the end of 1971 with the last U.S. Army troops leaving in January 1973. The draft was restructured as a lottery, then ended altogether.

The Kent State disaster also prompted conservative politicians like Nixon and Reagan to change their rhetoric. Campaigning for re-election in 1970, Reagan downplayed any disagreements with students and acknowledged their right to peacefully protest. As reporter Lou Cannon noted in his book Governor Reagan, “he was a disciplined campaigner who recognized the change in the public mood.”

The Kent State tragedy also marked a turning point in university relations with student activists. In an April 2010 article reflecting on the 40th anniversary of Kent State, The Chronicle of Higher Education noted that the killings “taught administrators to ‘never say never’ to student demands…Want an organization for human/labor/abortion/housing rights? Sure. Want an office and budget with that? No problem. Course credits? We can do that, too.”

We have now reached the 50th anniversary of the tragedy. Kent State officials had planned a memorial service which was to have featured a speech by Jane Fonda and a performance by David Crosby. However, the event was called off due to the virus lockdown.

Since no outdoor event will be held, the memorial site, a series of low granite slabs placed in a grove overlooking the shooting site, will bear silent witness. Each slab bears the names of one of the dead students: Allison B. Krause, Jeffrey G. Miller, Sandra L. Scheuer and William K. Schroeder. Had they lived, Allison and William would have turned 69 this year and Sandra and Jeffrey would have reached age 70.