The Saudis, the Jews, and FDR's Dog: The Opening of the US-Saudi Relationship

Dr. Medoff is director of The David S. Wyman Institute for Holocaust Studies, in Washington DC, and author of more than 20 books about the Holocaust, Zionism, and American Jewish history. 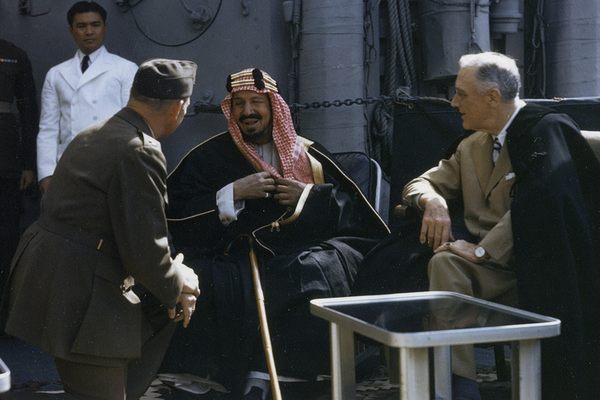 Seventy-five years after President Franklin D. Roosevelt’s controversial embrace of the king of Saudi Arabia, FDR’s grandson has become part of a Saudi-financed public relations campaign to celebrate his late grandfather’s pro-Saudi policies.
Hall Delano Roosevelt has been working with the LS2 Group, an Iowa-based public relations firm, to draw attention to the recent 75th anniversary of FDR’s meeting with King Abdul Aziz Ibn Saud, according to documents released by the Arab-American news site Al-Monitor. In the LST Group’s Foreign Agents Registration filings last year, it stated that it is paid $126,500 monthly by the Saudi Embassy in Washington to provide “public relations and media management services.”
The FDR-Ibn Saud meeting took place on February 14, 1945, on the deck of the USS Quincy. The king came aboard “with his whole court, slaves (black), taster, astrologer, & 8 live sheep,” President Roosevelt wrote to his cousin, Margaret Suckley. “Whole party was a scream!” The president does not seem to have expressed concern about the slaves.
The U.S. ambassador to Riyadh, William Eddy, was the official note-taker. He wrote down the two leaders’ remarks in the form of a “Memorandum of Conversation,” which both the president and the king signed. One of the topics they discussed was whether or not the Arab world could accept the creation of a Jewish homeland in Palestine. Roosevelt asked Ibn Saud for his view of “the problem of Jewish refugees driven from their homes in Europe.”
Ibn Saud responded that he opposed “continued Jewish immigration and the purchase of land [in Palestine] by the Jews.” The king insisted that “the Arabs and the Jews could never cooperate, neither in Palestine, nor in any other country.” President Roosevelt “replied that he wished to assure his Majesty that he would do nothing to assist the Jews against the Arabs and would make no move hostile to the Arab people.”
The king asserted that the Jews should be “given living space in the Axis countries which oppressed them,” rather than Palestine. In response, “The President remarked that Poland might be considered a case in point. The Germans appear to have killed three million Polish Jews, by which count there should be space in Poland for the resettlement of many homeless Jews.”
On March 10, several weeks after the meeting, Ibn Saud wrote to Roosevelt, asking him to oppose the continued development of a Jewish homeland in Palestine. In his April 4 reply, FDR recalled “the memorable conversation which we had not so long ago” and reaffirmed that “no decision [will] be taken with respect to the basic situation in that country without full consultation with both Arabs and Jews.” He also reiterated that he “would take no action, in my capacity as Chief of the Executive Branch of this Government, which might prove hostile to the Arab people.”
Speaking to a joint session of Congress on March 1, 1945, FDR departed from his prepared text to offer an ad-libbed comment about Palestine: “I learned more about the whole problem, the Moslem problem, the Jewish problem, by talking with Ibn Saud for five minutes than I could have learned in the exchange of two or three dozen letters.”
Roosevelt’s remark ignited a firestorm of criticism in the American Jewish community. “One wonders why Arab [leaders] were consulted about the fate of the Jewish National Home,” the American Zionist leader Dr. Abba Hillel Silver complained. “Were the Jewish people consulted about the fate of Iraq, or Syria, or Saudi Arabia?”
“Did [the president] learn nothing from years of association with Zionist leaders?,” the editors of The Reconstructionist asked. “Does the fact that all these Arab states waited until they got a personal invitation to declare war upon Germany teach him nothing? Does the all-out war effort by the Jewish yishuv [of Palestine] convey nothing to our President? Was his personal pledge last fall to the Zionist convention based upon little or know knowledge?”
There was criticism on Capitol Hill, too—including from members of FDR’s own party.“The choice of the desert king as expert on the Jewish question is nothing short of amazing,” Sen. Edwin Johnson (Democrat of Colorado) declared. “I imagine that even Fala [the president’s dog] would be more of an expert.”
Nothing about that controversy was mentioned at the U.S. Navy’s recent commemoration of the 1945 meeting between FDR and Ibn Saud. Speakers lavished praise on the US-Saudi alliance, sailors hoisted the two countries’ flags, and a reenactment of the famous photo of the original meeting was staged—this time featuring the president’s grandson, a descendant of the Saudi king, and the head of the U.S. Naval Forces Central Command. No black slaves were visible in the reenacted scene.
As president of the U.S.-Saudi Arabian Business Council and co-founder of the Friends of Saudi Arabia, Hall Delano Roosevelt is devoted to expanding relations between the United States and Saudi Arabia. Not surprisingly, FDR’s grandson has been emphasizing what he sees as the positives of the 1945 meeting. It was “historic” and demonstrated that the Saudis wanted to be “a productive part of the world,” he said in recent interviews.
But the unsavory side of that 1945 meeting—from the king’s black slaves to the disturbing comments by President Roosevelt and Ibn Saud regarding the Jews—should not be papered over. The public has a right to know the full story.
comments powered by Disqus