Michael Nelson is Fulmer Professor of Political Science at Rhodes College and a Senior Fellow at the University of Virginia’s Miller Center.  His book Clinton’s Elections: 1992, 1996, and the Birth of a New Era of Governance will be published later this month by the University Press of Kansas. 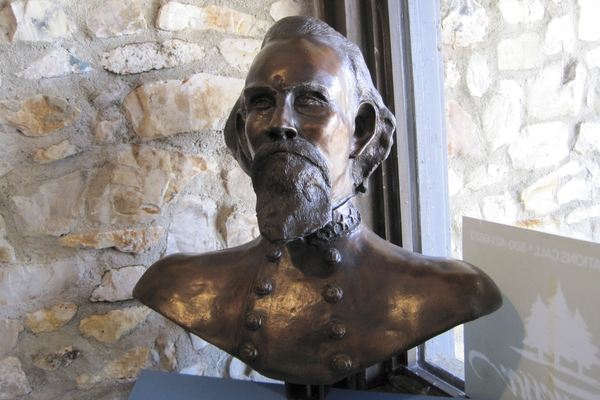 That was Nathan Bedford Forrest.

That was Nathan Bedford Forrest, too.

It’s just a few days until the Tennessee Capitol Commission meets on February 20 to decide whether to begin the process of moving Forrest’s bust out of the state capitol building in Nashville. If it votes to recommend removal, the matter will end up in the hands of the Tennessee Historical Commission, where a two-thirds vote to take out the bust would be required.

It’s also just a few weeks until the anniversary of the April 12, 1864, massacre at Fort Pillow, just 40 miles upriver from Memphis.

Memphis reached a judgment on Forrest in December 2017 when, in response to grassroots protests led by progressive activist Tami Sawyer and a brilliant stratagem by Mayor Jim Strickland, the park on Union Avenue where Forrest’s statue stood was deeded to Memphis Greenspace, a nonprofit specifically created for the purpose.  The statue itself was handed over to the Sons of Confederate Veterans, who presumably plan to feature it in the new National Confederate Museum they are hoping to build in Elm Springs, Tennessee.

The reason such a dodgy ploy was necessary is that the Historical Commission vetoed a near-unanimous Memphis City Council resolution in 2015 to remove the statue.  The commission grounded its authority to make this decision in the Tennessee Heritage Protection Act, a law enacted in 2013 to prevent actions like the one the city council wanted to take.

With fewer complications, the Shelby County Land Use Control Board also removed an “r” from Midtown’s Forrest Avenue.  A bit odd for sure (Forest is unforested), but no odder than the Downton Abbey-style names developers give to new suburban subdivisions.

Now, failing intervention by the General Assembly, the two state commissions must decide what to do about the Forrest bust that decorates the capitol

The standard debate on the bust runs along familiar ideological lines.  Conservatives say the state should honor Forrest as a great military commander, while liberals want to dishonor him as a slave trader and slaughterer of African American soldiers fighting for the Union.

The “great commander” view of Forrest inspired Memphis Civil War historian Shelby Foote to describe him as one of the two “authentic geniuses” to emerge from the conflict, the other being Abraham Lincoln.

It also inspired Union generals Ulysses S. Grant and William Tecumseh Sherman to pay tribute to Forrest’s military prowess. Grant described Forrest as “brave and intrepid.”  Sherman considered him “the most remarkable man our civil war produced on either side.”

Forrest’s astonishing elevation during the war from private to Lieutenant General, his innovative use of cavalry to harass and tie down Union forces in Tennessee and Mississippi, and his unfailing bravery and audacity in battle all attest to his reputation as a warrior.  Forrest “used his horsemen as a modern general would use motorized infantry,” wrote Civil War historian Bruce Catton.  His campaigns are still studied at West Point and the Army War College.

Admiration for Forrest as one of “the nation’s most amazing military figures” is what motivated longtime conservative Democratic State Senator Douglas Henry to persuade the Tennessee General Assembly to add the Forrest bust to the Capitol’s “Hall of Heroes” in 1978, according to Kenneth P. Paul, who worked with Henry.

The Capitol already had a bust of Admiral David Farragut, the inventive Tennessee-born Union naval commander during the war.  Henry thought it made perfect sense to complement it with one portraying the state’s equally exceptional Confederate army general.

Critics of the decision to install the bust—at the time and ever since—seldom dispute Forrest’s reputation on the battlefield.  Their view instead is that his dishonorable life as the leading slave trader in Memphis, his army’s slaughter of surrendering black soldiers after the battle of Fort Pillow was won, and his postwar service as an early leader of the Ku Klux Klan outweigh any other considerations.

The critics prevailed in Memphis not just with the removal of the Forrest statue and the Forest Avenue name-change but also with the replacement of a historical marker last year at the corner of Adams and B.B. King, the site of Forrest’s slave trading business.

The old marker, headlined “Forrest’s Early Home,” blandly noted that “following marriage in 1845, he came to Memphis where his business enterprises made him wealthy.”  Not a word about what—or even where—Forrest’s most lucrative business was.

The new marker’s title is “Forrest and the Memphis Slave Trade.”  The text includes a physical description of the “slave yard” and notes that, in contrast to the city’s other slave traders, Forrest added insult to injury by selling people recently imported from Africa in violation of a law passed by Congress in 1808.

To the extent that the arguments of both Forrest’s liberal critics and conservative defenders are valid, the debate about how to remember him is a hard one to resolve.

But are the arguments of his defenders valid? I’m a conservative who’s not so sure.

Consider what actually happened at Fort Pillow in 1864 in purely military terms.

The Union-held fort contained about 600 soldiers, more than half of them African Americans, many of whom had escaped plantations on which they were previously enslaved.  Because the fort had virtually no strategic importance by the time of the battle, one can’t help but question Forrest’s judgment in attacking it rather than deploying his forces elsewhere.

As a military backwater, Fort Pillow was, not surprisingly, weakly defended and poorly led.  In a battle that began early in the morning of April 12 and was effectively over a few hours later, many of the overrun Union soldiers fled down the bluff to the Mississippi River, hoping to be rescued by a nearby gunboat.

Forrest’s men showed no mercy, especially to the black combatants.  Nearly two-thirds of the slain soldiers were members of the United States Colored Troops.

Sgt. Achilles Clark of the Confederacy’s 20th Tennessee Cavalry wrote, “The slaughter was awful. Words cannot describe the scene.  The poor deluded negroes would run up to our men, fall upon their knees, and with uplifted hands scream for mercy, but they were ordered to their feet and then shot down. . . . Blood, human blood, stood about in pools, and brains could have been gathered up in any quantity.”

As Rhodes College historian Timothy Huebner observed in his book Liberty and Union: The Civil War Era and American Constitutionalism, “It is hard to escape the conclusion that raging Confederates, blinded by racial hatred, deliberately massacred black soldiers as they were attempting to surrender.”  Forrest himself observed, “The river was dyed with the blood of the slaughtered for 200 yards.”

It isn’t clear whether Forrest knew about the slaughter while it was taking place.  He said he didn’t. But does it matter?

If he knew, he stands justly condemned for condoning conduct that violated all the rules of war concerning the treatment of surrendering warriors.

If, as he later maintained, he didn’t know, he was guilty of gross negligence.

And think of the consequences—the military consequences—when northern publications ran stories on “The Massacre at Fort Pillow” and Congress’ Joint Committee on the Conduct of the War distributed 60,000 copies of a report describing in detail “a scene of cruelty and mercy without parallel in civilized warfare.”

In one fell swoop, Fort Pillow intensified northern resistance to any effort to end the war short of complete surrender, encouraged Union officers to treat southern captives cruelly, and built support in the North for President Lincoln’s previously controversial decision to invite tens of thousands of liberated slaves to take up arms as soldiers.

As Grant noted, by 1864 the Confederacy’s “only hope now is in a divided North.”  Fort Pillow went a long way toward mitigating any such division.

In all, as a commander Forrest gained temporary possession of a meaningless fort while making things worse for the Confederate military effort everywhere.

The fate of the Forrest bust is not a new issue for the 12-member Capitol Commission.  Despite pleas from Republican leaders Gov. Bill Haslam, Sen. Lamar Alexander, Sen. Bob Corker, and multiple Democrats to remove it, the commission voted 7-5 in September 2017 to keep the bust in place.

Since then Haslam’s Republican successor as governor, Bill Lee, has been able to replace two of the bust’s defenders on the commission, including King Miller of Memphis, with appointees of his own, both of them African Americans: Tyreece Miller of Jackson and Hallerin Hill of Knoxville.  The commission is chaired by state Finance Commissioner Stuart McWhorter, another Lee appointee.

In addition, a Vanderbilt Poll released in December shows that 76% of Tennesseans want the bust removed from the Capitol. That figure includes a majority of Republicans, Democrats, and independents; blacks and whites; men and women—just about every group imaginable.  About half of voters think the bust should go to a museum and about one-fourth don’t want it displayed anywhere.

In this altered political climate, the Capitol Commission may well vote to recommend relocating the bust, either at this month’s meeting or the next.  One can only hope the Historical Commission, which proved such an obstacle when the City Council wanted to move Forrest’s Memphis statue, will do the right thing when it votes on the bust.  And by right I mean both correct and conservative.