What Mussolini and Hitler's Rise to Power Can Teach Us about Opposing Trump: Unite, Unite! 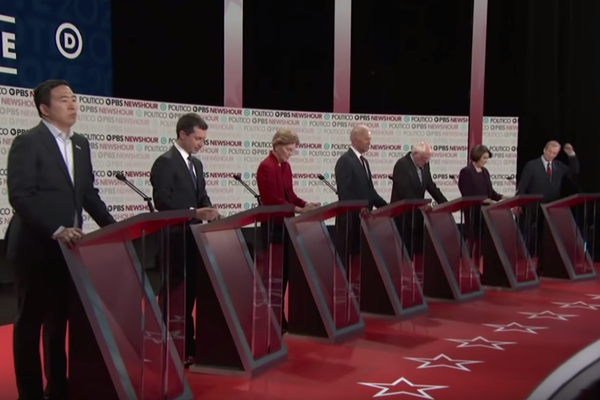 To defeat Trump the main thing history tells opponents is--unite! Do what adversaries of Mussolini and Hitler did not do in the early 1920s and early 1930s, thereby allowing the future tyrants to come to power constitutionally and then dismantle more democratic systems.

Opponents did not unite because they underestimated the two men or the damage they could do. Some were more fearful of the radical left. And some simply failed to think clearly about the consequences of failing to stop Mussolini or Hitler when it was still possible.

In 2020 Trump could be elected to a second term because some voters underestimate him or the damage he could do--the environmental harm alone is enough to cause nightmares. Some might fear the radical left more--asked about Bernie Sanders, in early February Trump said "I think he’s a communist.” In his State-of-the-Union address, he stated, “132 lawmakers in this room have endorsed legislation to impose a socialist takeover of our healthcare system, wiping out the private health insurance plans of 180 million Americans. To those watching at home tonight, I want you to know: We will never let socialism destroy American healthcare!” And some voters might select Trump because of unclear thinking--for example, accepting his claims that our economy is doing great and its mainly because of him. Actually, economic successes owe a debt to the Obama years; Trump has furthered economic inequality; and his long range harm to our economy because of his environmental and budget-busting policies is incalculable. (See also here and here for further rebuttal of Trump’s economic claims.)

The lack of clear thinking also occurs among Sanders backers and Sanders fearers. A recent Emerson-College poll indicates that among Sanders supporters only 53 percent said they would vote for another Democratic candidate if Bernie was not selected--16 percent said no, and 31 percent were undecided. Despite the assurances of Bernie himself and that of one of his most active leftist supporters, Rep. Alexandria Ocasio-Cortez, that they would support any winning Democratic candidate, many Bernie enthusiasts might not. In 2016, about 12 percent of Sanders voters in Democratic primaries ended up voting for Donald Trump in the presidential election. The Sanders-and-then-Trump supporters in Pennsylvania, Michigan, and Wisconsin won those states for Trump and handed him the presidency.

Among the Bernie fearers is conservative New York Times columnist Bret Stephens. He admits that “Trump is a lawless president and revolting person. . . . Yet for the overwhelming majority of Americans, life is pretty much the same under Trump as it was under Obama. The truth of Trumpism is that it’s a morally corrosive and corrupting force, not a politically or economically catastrophic one.” (Is this another example of the underestimation of evil that occurred in Italy in 1922 and Germany in 1933?) But rather than vote for a “radical” or “reckless” candidate like Sanders, Stephens indicates “none-of-the-above is a viable option.”

To further clarify the relevance of the Mussolini and Hitler examples the following information should prove helpful. Like many post-World-War-I European governments, Italy possessed a multi-party parliamentary system, and like some also a monarch. Aided by postwar dissatisfaction, including the alarm created by strikes and land seizures in 1919 and 1920, the pompous and strutting Mussolini played on the fears of communism and socialism shared by those afraid of losing their property and of Marxist atheism. In 1922, fearful of Fascist lawlessness and hoping that holding power would make Mussolini more moderate, King Victor Emmanuel III asked him to form a new government. Since the Fascists possessed a small number of representatives in the Chamber of Deputies, this government included only 4 Fascists among the 14 ministers.

As with Hitler later, Mussolini thus lacked majority support when first coming to power; but with his opponents disunited, he was able to enfeeble them one after another. In 1924, for example, the Socialist deputy Giacomo Matteotti stood up in the Chamber of Deputies and accused the Fascists of rigging recent elections. Eleven days later, he was stabbed to death by a Fascist gang. Despite public outrage at the murder, other political parties were unable to unite effectively against Mussolini, and by the end of 1925 such parties were outlawed.

Despite his own atheist beliefs, Mussolini mollified Catholics in 1929 by agreeing to the Lateran Treaty with Pope Pius XI. It acknowledged the political independence and papal control of Vatican City, as well as recognizing Catholicism as the religion of the Italian state. The treaty was popular among Italy’s overwhelmingly Catholic population and greatly increased Mussolini’s support. By 1930, when the pope denounced the government’s attempts to train the young in “a pagan worship of the State,” the papacy had insufficient allies to prevent Mussolini from further strengthening his rule.

During the 1930s Mussolini tightened his control over the Italian economy. By 1937 the Fascist government possessed the controlling interest in shipping, electricity, heavy machinery, steel, and telephones. In 1938 the Chamber of Deputies, long dominated by Fascists, was replaced by the Chamber of Fasces and Corporations.

In a Germany made more miserable by the Great Depression, conservative politicians and men of property thought they could use Hitler and his large Nazi party for their own purposes. But after President Paul von Hindenburg named him chancellor at the end of January 1933 he, even more rapidly than Mussolini, enfeebled his disunited opponents one after another. By mid-July of 1933, Hitler’s Nazi party had gone from having only one-third of the delegates in the multi-party Reichstag to being the only allowable party in it.

His first target had been the German Communists, who had the third most delegates in the Reichstag. Hitler blamed a late-February fire that destroyed the Reichstag building on them and, with the cooperation of Hindenburg, soon got them banned from the Reichstag. In March, using threats and promises, Hitler convinced that body to agree to the Enabling Act, which transferred legislative power to him and his cabinet and allowed him to suspend parts of the constitution.

Hitler’s next major move was to deal with a potential threat within his own Nazi party. Nazi Storm Troopers (SA) and their leader Ernst Röhm were unhappy with Hitler for appeasing old aristocratic and conservative elements, including those within the army. In June 1934, the “Night of the Long Knives,” Hitler had Röhm and others killed, thereby decreasing the distrust that conservative army leaders had for him. After President Hindenburg died in August 1934, Hitler abolished the presidency. He then ordered the armed forces to swear an oath of personal loyalty to him as Führer (leader).

Looking over books like Richard Grunberger’s The 12-year Reich: A Social History of Nazi Germany 1933-1945(1971), John Toland’s Adolf Hitler (1976), Ian Kershaw’s Hitler: A Biography (2008 edition), and Benjamin Hett’s The Death of Democracy (2018),one realizes how Hitler went from being called to power constitutionally to dismantling, piece by piece, democracy.

Grunberger has chapters, for example, on how the Nazis took over, mainly in the mid and late 1930s, such areas as the law, civil service, army, education, the press and radio, and how the party and Nazi government affected and restricted workers, landowners, women, the family, youth, and religion.

Toland mentions how Pope Pius XI signed a concordat with Germany in July 1933, by which “the Church agreed to keep priests and religion out of politics while Hitler, among other things, granted complete freedom to confessional schools throughout the country.” The pope also “remarked how pleased he was that the German Government now had at its head a man uncompromisingly opposed to Communism and Russian nihilism.”

Despite earlier Nazi attacks on capitalism, Hitler’s economic program after he came to power was based on supporting big businesses, as long as they supported his regime. His military rebuilding program, in particular, allowed German industrialists to enjoy favorable contracts and to make large profits. Meanwhile, Hitler put German workers back to work constructing public buildings and superhighways (autobahns) and producing armaments for the German war machine. Already by mid-1935, two‑thirds of the number of unemployed in January 1933 were once again working. Forbidding any threats to his authority, Hitler dissolved the old labor unions and prohibited strikes. Workers were pacified with better wages and working conditions, vacations, pensions, children’s camps, and a Nazi ideology that preached overcoming class differences in the process of creating a harmonious German community.

Like Mussolini and Hitler, Trump came to power aided by economic dissatisfaction and fears of “alien” forces (e.g, Jews in Germany and immigrants in the USA). All three men promised to make their nations great again, supported military spending, and within a few year decreased unemployment. They also gradually strengthened their powers over disunited opponents. Hett writes that members of “the conservative establishment . . . could have stopped Hitler in his tracks,” but they thought they could manipulate him. Kershaw writes that Hitler’s assumption of dictatorial powers was “made possible only through the underestimation, mistakes, weakness, and collaboration of others.” In Trump’s case, other Republicans had their chance to impeach him, but, as with some of the opponents of Mussolini and Hitler, fear and other factors prevented them from acting.

Hett also notes that “the key to understanding why many Germans supported him [Hitler] lies in the Nazis’ rejection of a rational, factual world.” Mussolini also rejected such a world: “If relativism signifies contempt for fixed categories and those who claim to be the bearers of objective immortal truth, then there is nothing more relativistic than Fascist attitudes and activity.” And Trump denies scientific climate-change findings, labels news he does not like “fake,” and has no respect for truth. All three leaders also bamboozled some religious believers, in Trump’s case mainly Evangelicals, to support them.

Those who did not support Mussolini in 1922 or Hitler in 1933 and failed to stop their increasing tyrannical ways got no do-overs. But American voters in 2020 still have the chance to end Trumpism before it spreads further in our courts, justice system, government agencies, and beyond the Republican Party. To do so, however, voters must realize how dangerous he is--“I think he’s a long-term and immediate danger to the country,” as one senior national security official stated. And they must unite and vote for his Democratic opponent. The luxury of voting third party or not voting at all is no longer a sensible option for anyone wishing for a USA we can cherish.