The “Trump Economy”: Throwing the Grandkids under the Bus 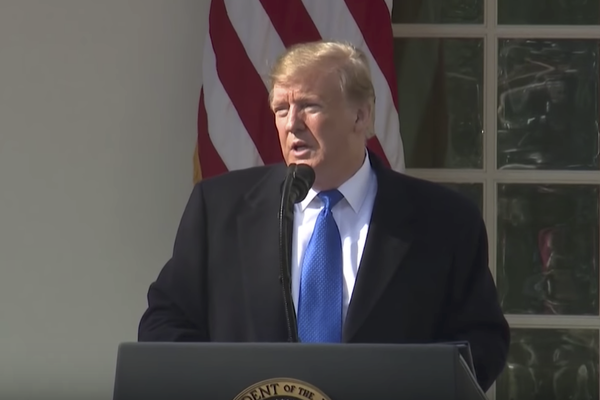 On July 5, 2019 the White House put out a statement declaring “The Trump Economy Smashes Expectations Once Again.” It added that the “June’s jobs report smashed expectations, proving once again that President Donald J. Trump’s pro-growth policies are delivering for American workers.” Two days later, The Washington Post noted that a recent poll by it and ABC News gave Trump “the best approval rating of his presidency,” and the main reason appeared to be our “strong economy.” And yes in April unemployment fell to the lowest rate in the last half-century, and in July the stock market reached all-time highs.

Although heretofore in August the stock market has fluctuated widely, and talks of a possible recession prior to the 2020 elections have increased, Trump knows that his reelection chances could be greatly affected by the state of the U. S. economy. Thus, he is likely to use all powers at his disposable, including additional tax cuts, to make the economy look as good as possible in 2020.

But as a historian and grandfather of six grandchildren, 16 and under, I think that Trump’s claims of a “strong economy” are misleading. A recent comparison of the “Trump vs. Obama economy” puts the matter in better perspective. Those who in 2020 vote for him primarily because “he has improved the economy”—if superficially this still seems to be the case—will be as foolish as those Germans who supported Hitler between 1939 and 1942 because he had expanded German control over much of Europe.  Or as unwise as those who agreed with financier Bernard Baruch and believed in 1929, right before the onset of the Great Depression, that “the economic condition of the world seems on the verge of a great forward movement.”

Historians are not seers who can know the future, but as futurist Tom Lombardo has written, “Memory of the past . . . is the knowledge foundation for both present and future consciousness, as well as wisdom.” And we know enough of the past to realize that good judgments often require a time-based perspective.

Trump and the justifiers of his economic policies represent, to use the words of former Federal Reserve Chairman Alan Greenspan, a case of “Irrational Exuberance.” Such exuberance is misplaced for many reasons, but two outcomes will be especially harmful to our children and grandchildren. The first is the tremendous environmental damage that the Trump economy is unleashing, and the second is the ever-growing national debt.

Regarding the environment, let’s put aside the social, political, moral, and cultural effects and zero in on the economic cost, for the economy is our focus here. Since we are considering future economic costs, there is no certainty as to their amount, just as there has been no certainty in the past about how much major wars would cost. But consider the dire projection made by the 13 federal agencies in the U.S. Global Change Research Program (USGCRP)’s 2018 report to the U. S. Congress and President Trump: “The continued warming that is projected to occur without substantial and sustained reductions in global greenhouse gas emissions is expected to cause substantial net damage to the U.S. economy throughout this century, especially in the absence of increased adaptation efforts. With continued growth in emissions at historic rates, annual losses in some economic sectors are projected to reach hundreds of billions of dollars by the end of the century.”

An article in Market Watch cited this same report and  mentioned other findings and projections on the economic threat of climate change: “Climate change has cost U.S. taxpayers more than $350 billion over the past decade [think, for example, of payments for hurricane, flooding, drought, and fire damage, all heightened by climate change]. . . . By 2050, that figure will be $35 billion per year. . . .Climate change will send food, energy, and water costs soaring. . . . Incomes are expected to shrink by 36% by 2100 due to climate change, and millennials will bear the brunt of the economic effects.” In addition, rising temperatures and erratic weather events will increase food costs. “A 21-year-old college student graduating in 2015 is expected to lose $126,000 in lifetime income due to climate change and the generation as a whole is expected to lose $8.8 trillion in lifetime income.” While climate-change effects are likely to decrease income, they are expected to increase health care costs, including for mental health. “The American Psychological Association predicts that climate disruption will cause a steady increase in mental health issues, including depression, anxiety, post-traumatic stress disorder, suicide, and addiction.”

Although the above predictions are not certainties, they help make the point that in judging the success of the Trump economy, we cannot dismiss the future effects of his climate policies. Also threatening their future is the growing national debt, a subject that has received increasing attention during the last week following the release of a new study by the nonpartisan Congressional Budget Office (CBO).

Although George W. Bush left Barack Obama a $1.4 trillion national deficit, by Obama’s last full year in office (2016), it was only $587 billion for the fiscal year (ending September 30). Under Trump in 2017, it was $666 billion; and in 2018, $779 billion. For fiscal 2020, the CBO estimates the deficit will be $1 trillion. When Trump became president the accumulated national debt was $19 trillion. By July 2019, it was over $22 trillion. Thus, although during his 2016 campaign he claimed he could eliminate the debt if allowed to serve two terms, so far under him it has increased by $3 trillion.

True, the debt is not entirely Trump’s doing—the economic record of any presidency is affected by many factors. For example, the Bipartisan Budget Act of 2019, signed by Trump at the beginning of August, was supported by more Congressional Democrats than Republicans, and it raised budget caps and the nation’s debt limit for two years. But Trump enthusiastically supported it, tweeting that the plan was “phenomenal for our Great Military, our Vets, and Jobs, Jobs, Jobs! Two year deal gets us past the Election.” AWashington Post article on the deal stated “Mitch McConnell told President Trump privately last month that no politician has ever lost an election for spending more money. That mind-set—caring more about the next election than future generations—helps explain Trump’s motivation.

Moreover, Trump also claims that the economy is his—see this essay’s first sentence—and voters in 2020 will consider him the politician most responsible for it. Though if there is an economic downturn, he will no doubt blame it on the Federal Reserve and other non-Trumpian causes. Also the December 2017 tax cut was mainly his doing, and the CBO estimated that it would add more than $1.5 trillion to the budget deficit over a decade.  By decreasing revenues, as well as increasing income inequality, it meant government borrowing had to increase. Even with the low interest rates now existing, the federal government this year must pay more than $350 billion to service that debt. (If Trump pushes additional tax cuts to increase his election chances, that would likely increase the debt even more.) On a recent PBS Newshour conservative David Brooks and liberal Mark Shields agreed that our children and grandchildren “are going to have to deal with . . . the [debt] burden.”

Similarly, it is future generations who will be most impacted by climate change. Commenting on the activism of the million and a half kids worldwide who in March 2019 went on a climate strike and refused to go to school, environmentalist Bill McKibben said, “I think the reason that young people are so involved is because . . . you and I are going to be dead before climate change hits its absolute worst pitch. But if you’re in high school right now, that absolute worst pitch comes right in the prime of your life. And if we’re not able to take hold of this, then those lives will be completely disrupted, and they’ve figured that out.”

Thus, during the present campaign season if individuals tell you they’re voting for Trump in 2020 because of the “good economy,” mention the environment, deficits, and the debt to them. And since Republicans often like to talk about “family values,” ask them what kind of world they think the “Trumpian economy” is going to bequeath to their kids and grandkids.