What Did Hitler Think About Anglo-American Capitalism?

James Thornton Harris is an independent historian and a regular contributor to the History News Network. For more information see www.JamesThorntonHarris.com 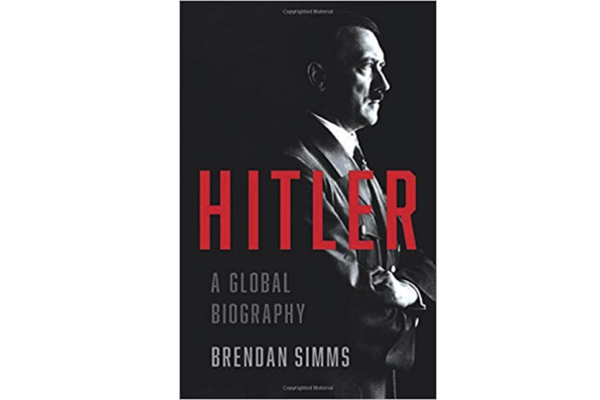 Did Adolf Hitler initiate the Holocaust because he was concerned about the strategic threat of “Anglo-American capitalism” rather than his own personal hatred of the Jews?

This assertion, that the extermination of the Jews came as a secondary objective in an overall plan to create a new German empire, is just one of the many controversial conclusions made by historian Brendan Simms in his new book, Hitler: A Global Biography.

According to Simms, a professor of international relations at Cambridge University, the Nazi dictator was “preoccupied” with the rise of “Anglo-American” capitalism. Hitler saw Great Britain and the U.S. as a single global empire. The Nazi leader was particularly impressed by America’s rapid geographic and economic expansion which he believed was due to its ruthless policy of eradicating indigenous peoples and a legal system mandating white supremacy.

Simms contends that Hitler initially formed these beliefs as a German soldier in the last years of World War I. As a private on the front lines, he encountered a powerful, well-equipped American army manned by tall, well-fed soldiers; they presented a startling contrast with the exhausted, underfed Germany army. Hitler was particularly confounded by some captured Americans who were immigrants from Germany. To him, they represented a key reason for Germany’s decline: it was losing many of its most productive citizens.

After Germany’s surrender in November 1918, Hitler concluded that the only way Germany could rise to become a global power was to adopt the “American model” of geographic expansion and white racial supremacy.

In Simms’s accounting, all off Hitler’s major initiatives after he came to power--including the conquest of France and the invasion of the Soviet Union in 1941--were designed to create a vast Germany that could rival the Anglo-American one.

Hitler’s persecution of the Jews was simply a “major plank” of the dictator’s multi-pronged “containment strategy” against the Anglo-American forces of domination, Simms claims. Prior to 1940, and the outbreak of a full-scale war with Great Britain, he viewed Germany’s Jews as “hostages” to insure the good behavior of “the supposedly Jewish-controlled United States.” Once the world war began in earnest (with the invasion of France in 1940), he could no longer use the hostages, so he gave the signal to his lackeysto start the mass extermination of the Jews.

Although Hitler publicly railed against “Jewish bolshevism,” Simms asserts that in ordering the invasion of the Soviet Union in 1941, his primary goal was not to destroy communism, but rather to secure resources for Germany that could be used to fight the Anglo-American enemy.

Simms states, “Hitler targeted the Soviet Union not so much for what it was (ideologically) as for where it lay (geographically). There was, so to speak, nothing personal about it.”

This is just one of many conclusions that run counter to the view of most contemporary European historians. Simms acknowledges that his book breaks with the “prevailing views” of Nazi Germany. He claims that his biography is based on “neglected” source materials. As a result, his book is written much like a doctoral thesis and is stuffed with 2,800 footnotes (the majority referring to German language documents). Simms piles up fact after fact creating blocks of evidence with no compelling narrative.

Another point of confusion for readers is Simms’s maddening lack of context when quoting Hitler. Too often we read that the Nazi leader “proclaimed,” “vowed” or “promised,’ but we are not told where or to whom the dictator was speaking. Obviously, it makes a difference whether the dictator was making a nationwide broadcast or just idly chatting with cronies during tea-time at Berchtesgaden.

Simms, who wrote eight previous books including Europe: The Struggle for Supremacy, notes in his introduction that he was inspired by the new historical method of Histoire croisée.This is a French term meaning“interconnected” or “interwoven;” the proponents of this method(also called transnational history)seek to understand political and social developments as global phenomena, trends that cannot be confined to nation states. Thus, Simms believesHitler’s stunning rise was not just a product of the German nation but hadinternational origins.

Whatever Simms’s theoretical background, many students of World War II history will find it hard to accept a number of his conclusions. If Hitler was so focused on defeating the Anglo-American empire (rather than communism), he would have made this a priority for the vast military machine he created.  For example, he consistently shortchanged the Germany Navy, the one military force that could sever American supply lines to Britain.  He consistently ignored the few experts who warned of American military capabilities. And, although he briefly contemplated invading England, he finally followed his “destiny” and ordered the invasion of Russia, a reckless act of self-destruction that cost 25 million lives including his own.

At the heart of Simms’s thesis is the assumption that Hitler was mentally stable. Simms portrays Hitler (until the last months in the Berlin bunker) as a rational, sophisticated adult. Simms accepts him as a person driven by ideology with a well-defined intellectual superstructure rather than a deeply insecure, narcissistic sociopath.

In contrast, Ian Kershaw, the acclaimed author of a best-selling, two-volume biography of Hitler, describes the dictator as an “empty vessel,” a man lacking any deep personal relationships. In Kershaw’s words, he was in the “privileged position” of “one who cares about nothing but himself.” Hitler was not consistent in his ideology or military strategy, instead he was a narcissist, a gambler driven to taking risk after risk, all to prove his self-worth.

Simms’s book adds to the growing body of literature examining the relationship between the German state and America, both pre-war and post-war. In the past two decades, a re-unified Germany has engaged in Vergangenheitsbewältigung, a public debate about its problematic past. One result is the many new monuments and museums devoted to the tragedy of the Holocaust.

In response, a number of historians and social scientists have suggested that the U.S. could learn from Germany’s effort. They suggest that Americans undertake a similar public reckoning about our country’s three hundred years of slavery.

Earlier this year, the American philosopher and essayist Susan Neiman published Learning from the Germans: Confronting Race and the Memory of Evilwhich outlines the case for such a project.

Perhaps we are headed for one of history’s great ironic twists. Hitler sought to model Germany’s racial laws on American ones. His efforts resulted in a catastrophe, with millions murdered and a nation in ruins.  Now, 75 years later, the modern Germany may offer a model for Americans on how to account for our nation’s historic evil of slavery.