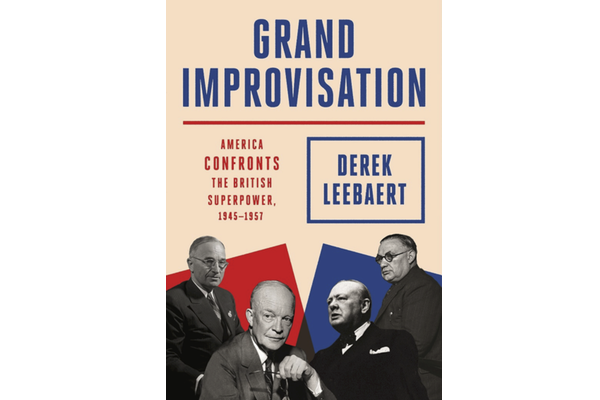 “Unfair,” “obsolete” and “rip-off” are some of the terms President Trump has used to characterize our nation’s international alliances and defense pacts.

The suspicion of foreign “entanglements” is nothing new; isolationism dominated American politics before World War II. In 1939, American had an army of just 185,000 men and a defense budget smaller than Italy’s.

America’s rapid emergence as a global superpower after 1945 is the subject of Grand Improvisation: America Confronts the British Superpower 1945-1957. Author Derek Leebaert challenges the conventional wisdom that an exhausted Great Britain voluntarily “handed the baton” of world leadership to the U.S. after World War II.

According to Leebaert, it is a “myth” that in 1945 the British Empire “was too weak and too dispirited” to continue its role as global policeman. In Grand Improvisation, he carefully documents a different narrative, arguing persuasively that from 1945 to 1956, Great Britain desperately tried to maintain its role as head of the world’s greatest empire, despite massive war debts and an electorate focused on major domestic reforms.

The author points out that Great Britain, contrary to a popular misconception, survived World War II in good shape. The island nation emerged victorious, retained every inch of its pre-war territory and almost all of its industrial resources. In world of 2.3 billion people in 1945, more than 600 million were subjects of the King of England. Leebaert notes that “A quarter of the map was colored in imperial red” including Egypt, India, South Africa, Hong Kong and Singapore.

In the election of June 1945, Labour Party leader Clement Attlee swept Winston Churchill out of power with a stunning victory. While the new Labour government is remembered principally for its major reforms including creation of the National Health Service and nationalization of the coal and steel industries, it was also dedicated to maintaining Britain as a major world power. The Labour government authorized building of Britain’s own atomic bomb (with plutonium from an advanced type of atomic power plant) and invested in daring military aircraft.

While the U.S. reduced its armed forces by 80 percent in the year after August 1945, Britain still had 1.1 million men under arms in December 1946; the British leadership was worried that America would retreat into the isolationist policies of the 1930s. The British foreign policy leadership, headed by Prime Minister Attlee and Foreign Secretary Ernest Bevin and backed by the nation’s elite corps of Foreign Service officers, sought to keep the U.S. directly involved in Europe and Asia while maintaining the economic and political power of its own Commonwealth.

According to Leebaert, Attlee and Bevin cunningly set out to play a “double game.” The British leaders sought to inveigle the Americans into providing substantial military assistance and economic support for Britain’s foreign policy objectives, while they played the role of senior partner.

The first example he cites involved the 1947 crisis in Greece. Since the war, the British had pumped economic assistance into Greece and stationed 5,000 troops there, propping up a shaky monarchy fighting a communist-backed guerrilla army. Great Britain, struggling to pay off its debts and maintain the value of the British pound, was desperate to withdraw its troops and cut economic assistance, yet still remain a dominant power in the Mediterranean.

Bevin, who had been a powerful union leader before the war, used what he privately admitted were “shock tactics” to scare the American leadership into committing massive military aid to Greece.

In a daring bluff, Bevin told the U.S. leaders Britain would imminently withdraw its troops and cut aid. This frightened President Harry Truman and Secretary of State George Marshall into announcing a new foreign policy. President Truman went before Congress on March 12, 1947 to announce a new policy whereby the U.S. would “support free peoples” around the world. This new responsibility was necessary, Truman said, because Great Britain was “liquidating” its role. In fact, Leebaert states, the U.S. president had been misled — Bevin would have kept troops in Greece even if the U.S. had not pledged support.

A year later, the U.S. initiated the Marshall Plan, which pumped some $100 billion (in current dollars) into Western Europe. In Leebaert’s view, this was another success by the crafty Brits in tapping Uncle Sam’s checkbook to support their area of influence.

After achieving his goals in Greece, Bevin sought additional American commitments, particularly in Europe, where the Russians were tightening control over the Soviet bloc and deployed strong forces in East Germany. Bevin’s concern was that the Americans were not formally committed to protecting Western Europe. He wanted to get the U.S. to “specify how, when and under what terms” they would send troops to oppose Russia. Thus, he quietly inserted two paragraphs into a draft treaty that would become NATO. This was the famous “Article 5” which committed all signees to respond together in cast of an attack on any one of them (a commitment that Trump has said he may not honor).

The British effort to maintain the illusion that they still controlled an empire and were, in effect, co-equal world leaders with the U.S. was maintained until the Suez Crisis of 1956.

After Egyptian dictator Gamal Nasser nationalized the Suez Canal in July 1956, France, Britain and Israel secretly conspired to invade the canal zone and return it to European control. The result was a military debacle. President Eisenhower, who had not been consulted, was furious and cut-off U.S. oil supplies to the three invaders. The United Nations voted overwhelmingly to condemn the action. Under fire for initiating a humiliating military defeat, Prime Minister Anthony Eden (who had succeeded the elderly Churchill) resigned in early 1957.

The Eisenhower Administration led by Secretary of State John Foster Dulles and Vice President Nixon, soon made a series of speeches that were hailed in the U.S. press as “Eisenhower’s Declaration of Independence” from British foreign policy. Nixon would later cite this moment as point were the U.S. took over “the foreign policy leadership of the free world.”

Leebaert notes that the term “superpower” is frequently used today, but often misunderstood. He reports that William T.R. Fox, a Columbia University professor of international relations, coined the term “superpower” in 1944. Fox said it defined a nation that wielded “great power plus great mobility of power.” In other words, the ability to project military power around the world via land, air and sea power. The U.S. achieved superpower status in the 1950s and the Chinese are working hard to achieving it for their nation now.

But what about soft power, the power of culture the power of ideals?  For the last sixty years, the world has watched American films, listened to American music and dressed in American fashions. America’s struggle with racism and the successes of our nation’s civil rights movement have inspired millions of people on other continents to demonstrate for their own civil and human rights.

Leebaert makes a strong case for this thesis that the British political leaders played a “double game,” but he ignores many other factors that impacted America’s developing world role.

He ignores Dr. King and the civil rights movement and the rapid global spread of American culture. The rise of the right-wing anti-communist movement certainly influenced Eisenhower and Nixon, yet the author dismisses Senator Joseph McCarthy in three paragraphs.

The dictionary definition of improvisation is to “simultaneously compose and perform without any preparation.” Was America’s assumption of the British Empire’s global leadership role really an “improvisation?” Perhaps it was inevitable for a country that experienced a century of huge social and economic progress, capped by the emergence of Wall Street as the capital of international finance.

Leebaert has shown a new light on an important passage in modern American history, but if he had taken a few steps back for a broader perspective he could have illuminated so much more.