The 1936 Olympics Teach Us Why Trump's Lies Are So Dangerous

Andrew Maraniss writes sports- and justice-related nonfiction for teens and adults.  He is the author of GAMES OF DECEPTION, the story of the first US Olympic basketball team (Nov. 5, 2019, Philomel). His first book, STRONG INSIDE, was a New York Times bestseller and recipient of both the Lillian Smith Book Award for civil rights and the RFK Book Awards’ special recognition prize for social justice. Follow Andrew online at www.andrewmaraniss.com and on Twitter @trublu24. 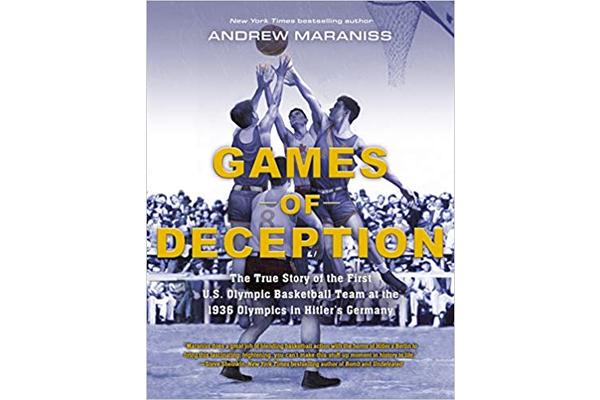 I’ve started and stopped writing this column several times over the last two weeks, reacting to the latest news of lies and corruption in the Trump administration and connecting them to the themes in my new book about the first US Olympic basketball team at the 1936 Berlin Olympics.

The problem is it’s so easy to make the connections, and there’s too much lying and corruption to keep up with.

Regardless of what the latest headline is, this moment in American political history is similar to 1930s Germany because of the proactive disregard for the truth. Trump’s White House today and German officials then did more than just lie; they treat the truth as irrelevant.

Nazi propaganda minister Joseph Goebbels said as much to the New York Times when he was interviewed for a personality profile in 1934. “The worth of propaganda cannot be judged by esthetic standards but only by reference to the results,” he admitted. “Propaganda is a means to an end. If that end is attained, the means are good. Whether they satisfy exigent esthetic requirements is immaterial.”

Leaders of the U.S. Olympic movement at the time operated with a similar mindset. When some Americans rightly pointed to the human rights abuses in Nazi Germany and asked how a competition based on sportsmanship and fair play could occur there, American Olympic Committee president Avery Brundage responded with a pro-German PR campaign. Brundage portrayed boycott supporters as un-American, staged a farce of a fact-finding trip to Berlin (where he cavorted with his Nazi hosts) and sent Hitler admirer Charles Sherrill to Germany – where he came away impressed rather than horrified by the 1935 Nazi rally at Nuremberg.

Brundage was a bigot in an important leadership position who purposely misled the American public about the Nazi regime. He worked with the Nazis behind the scenes to influence public opinion in the U.S. He had personal financial motivation to cooperate with the Nazis because his construction firm was contracted to build a new German embassy in Washington, D.C.

Brundage’s narrow worldview was dangerous, and public servants willing to acknowledge the truth knew it.

American diplomat George Messersmith identified the looming Nazi threat to world peace earlier than most in the U.S. government, writing to the State Department in 1933 that many Nazi leaders were “psychopaths” bent on war.

Incensed that Brundage and Sherrill were uninterested in acknowledging the true conditions in Germany and were willingly misleading the American public, he sent cables to U.S. Secretary of State Cordell Hull in hopes that accurate information would educate the decision makers at the American Olympic Committee and Amateur Athletic Union who would ultimately decide whether the U.S. would boycott. He reported that Jewish people had been kicked out of German sports organizations and anticipated that the Nazis would allow a token Jewish person or two to participate in Olympic training programs, warning that “this will be merely a screen for the real discrimination which is taking place.”

But Messersmith’s reports were ignored, even when he suggested that a U.S. boycott would do considerable damage to Nazi prestige at home and abroad.

Hull didn’t want to get involved, and Brundage didn’t care about the truth.

In the face of a mounting threat to humanity, a campaign of lies, inaction, and disinterest in the truth were all equally dangerous.

It’s more obvious than ever before in my lifetime that those dangers haven’t gone away. They’re still with us, and every generation must resist them. If the first casualty of Nazism was the truth, then we must call out dangerous lies in our own time and raise alarms when we see justice or humanity imperiled. In his Nobel Peace Prize speech in 1986, Holocaust survivor Elie Wiesel said history has taught us that we cannot be bystanders.

“If we forget, we are guilty, we are accomplices,” he said. “The world did know and remained silent. And that is why I swore never to be silent whenever and wherever human beings endure suffering and humiliation. We must take sides. Neutrality helps the oppressor, never the victim. Silence encourages the tormenter, never the tormented. Sometimes we must interfere. When human lives are endangered, when dignity is in jeopardy, national borders and sensitivities become irrelevant. Wherever men and women are persecuted because of their race, religion, or political views, that place must—at that moment—become the center of the universe.”