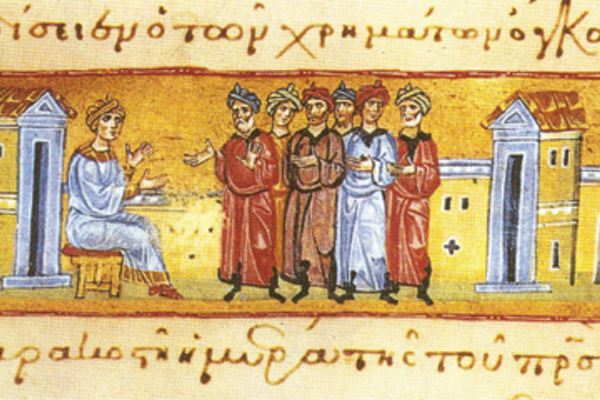 On a side of the baptistry of the Piazza Duomo in the northern Italian city of Parma, there is a portal designed and constructed in the late twelfth-century and into the early thirteenth by the architect Benedetto Antelami. Above an entrance for catechumens – that is converts to Catholicism – Antelami depicted the story of two saints whose story was popular in the Middle Ages, but who have become more obscure in subsequent centuries. St. Josaphat and St. Barlaam, the former an Indian prince and the later the wondering holy man who converted him, are depicted in pink Verona marble at the side of the Romanesque church. For the generations of Parmesans who worshiped and were baptized inside of the structure, they passed underneath an entrance that told tale of the “country of the Indians, as it is called… vast and populous, lying far beyond Egypt,” as described by St. John of Damascus in his seventh-century account of the two men.

According to hagiographies, St. Josaphat had been the son of a powerful Indian ruler who’d taken to persecuting the Christians in his kingdom that had been converted by the Apostle St. Thomas. Tortured by a prediction that his son would also convert, young Josaphat was sequestered away in a palace to prevent him from experiencing the suffering of the world. The prince escapes, however, and during his sojourns, he encounters an aged man, a leper, a dead body, and finally the mendicant monk Barlaam who brings Josaphat to an enlightenment. For many of you reading, this story may sound familiar; though for a medieval Italian it would have been simply another beloved saint’s tale. But St. Josaphat is a particularly remarkable Roman Catholic saint, for he’s normally known by a rather different title – the Buddha.

The Buddha, as in the Christian legend which clearly developed from his story in a centuries-long game of telephone which stretched across Eurasia, had been sequestered away within a luxurious palace, only to leave and encounter an elderly man, a leper, a corpse, and finally a wandering ascetic. In the European legend, St. Josaphat converted to Christianity, and for Christian believers thus achieves salvation. For Buddhists, Siddhartha ultimately reached enlightenment and taught other sentient beings how to overcome the suffering which marks our existence. These are different things of course, yet there is a certain congruence between the Buddha’s call in the Dhammapada to “Conquer anger with love, evil with good, meanness with generosity, and lies with truth” with Christ’s teaching in John 8:32 that the “truth shall set you free.” In the legend of St. Josaphat and St. Barlaam those congruences are made a little more obvious, even for all of the differences from its source material.

Author Pankaj Mishra explains that long before the Western vogue for Buddhism associated with the 1960’s counterculture and the Beats, before the appropriation of Siddhartha’s story by Transcendentalists and Romantics, the Buddha “himself reached the West in the form of a garbled story of two Christian saints.” The origin of that story’s route into Christendom is obscure, even while the congruencies between the two narratives show a clear relationship. How Siddhartha Gautama, the historical Buddha venerated by half-a-billion Buddhists, and whose life pre-dates Jesus Christ by five centuries, became a popular medieval Christian saint is a circuitous, obscure, and enigmatic story which tells us something about the ways in which religions are porous countries, endlessly regenerative, continually borrowing from another, and generating shared stories of meaning.

So how did the Buddha end up carved on a baptistry portal in Parma, what scholar Gauranga Nath Banerjee describes as being among the “most curious thing borrowed by the Roman and Greek churches”? The etymological genesis of the name “Josaphat” is relatively straightforward, as the saint’s Latin name derived from the Greek “Ioasaph,” itself from the Arabic “Yudasaf,” back to the Sanskrit “Bodhisattva,” the Buddhist honorific for a person who has achieved enlightenment, but rather than extinguishing their suffering in nirvana opts to be reborn so as to help their fellow humans achieve peace.

The gradual development of “Bodhisattva” into “Josaphat” provides a rough genealogy of the way in which the central narrative of Buddhism ended up in a Christian hagiography. Historian Lawrence Sutin explains that it was in the “mid-nineteenth century that scholars first concurred that the origins of the Barlaam and Josaphat legend lay in the traditional life story of the Buddha.” He goes on to explain how the narrative found its way into Western Europe from Greece, and before that Georgia, where it had in turn arrived from Persian sources associated with Manicheanism, a once influential and now extinct religion which venerated both Christ and the Buddha. Sutin takes pains to emphasize that narrative similarity doesn’t imply theological congruence, for it “cannot be demonstrated that any distinct Buddhist teaching had survived in the oft-mutated… legend.”

An important point, even as there is something beautiful and strange about the thought of medieval Christians worshiping underneath the mantle of the Buddha without even knowing it. Religions aren’t easily reducible into one another, to convert Buddhism into Christianity is to violate that which is singular about both. A certain strain of well-meaning comparative religious studies from the middle of the twentieth-century, often associated with Huston Smith’s classic textbook The Religions of Man, has a tendency to remake all of the tremendous diversity of world religions into versions of liberal Protestantism. There is an ecumenical tolerance implicit in the argument that all religions are basically the same, that they all share certain deep truths that can be easily translated into one another, but as scholar Stephen Prothero argues this is a “lovely sentiment but it is dangerous, disrespectful, and untrue.” When it comes to consilience between Buddhism and Christianity, a fair and honest accounting which is respectful to both traditions must admit that “salvation” and “enlightenment” are not the same thing, nor is “karma” equivalent to “sin,” and that “nirvana” is not another word for “heaven.” These things are different, and there is a significance and power in that.

However, we still have St. Josaphat and St. Barlaam, Orthodox and Catholic saints rather than Bodhisattvas, but characters whose story still derives from those forgotten Buddhist sources. They may not demonstrate that all religions teach the same thing deep down, they aren’t examples of how faiths can be converted into one another, and teachings being easily translated. But they do demonstrate that in that ineffable domain between beliefs, in that meeting point where the mysteries of different religions can touch, there is a place for communication. Sutin writes that in the Roman martyrology, St. Josaphat and St. Barlaam’s “joint feast day is observed on November 27, a date that has been ignored by present-day Western Buddhists but might well serve as a time for celebration of longtime affinities between the two paths.” Religions may not be reducible to each other, but the example of the Parma baptistry is a reminder that faiths are ever shifting countries whose borders are more porous than can be assumed. Something in the Buddhist story appealed to person after person in a chain that led from India to Italy and beyond, and even as that story altered it was the power of those characters and their narrative that exemplifies a certain shared understanding. Within the space of that portal, there is room for meeting, for mutual understanding, for empathy, for reciprocity, for faith. For mystery.