Citibank: Exploiting the Past, Condemning the Future 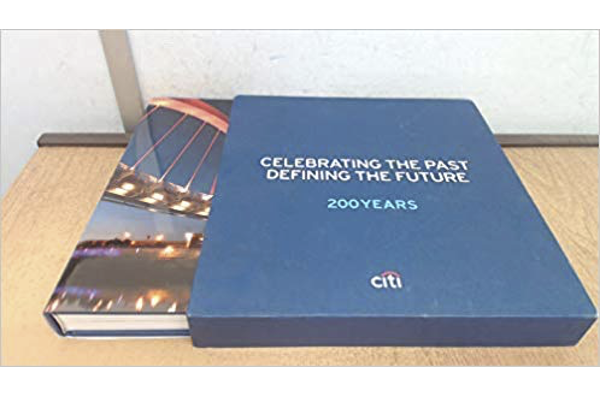 In 2011, Citigroup published a 300-page 200th anniversary commemoration Celebrating the Past, Defining the Future. I recently saw a copy on the customer desk at my local branch in Brooklyn and could not resist reading and reviewing the book. I passed up purchasing a copy on Amazon for $849, but my university library was able to secure a copy through an inter-library loan.

I am interested in Citigroup and its history because of my own research on New York City’s relationship with slavery, the slave trade, and the sale of slave produced commodities (New York And Slavery: Time To Teach The Truth, SUNY Press 2008 and New York’s Grand Emancipation Jubilee, SUNY Press 2018) and because of the role international banking played in the 2008 financial crisis.The federal government rescued Citigroup from potential collapse by covering over $300 billion in risky assets and transferring $20 billion to the bank.

According to CEO Vikram Pandit in the book’s foreword, “In the summer of 1812, a dozen New York merchants came together to form the bank that would be known as Citi. They pooled their capital, shared ideas, and financed new ventures. Their principles guided the bank’s principles; their success fueled the bank’s success. From the beginning, they backed bold projects that improved and connected the world” (9). The book’s introduction elaborates on this theme claiming that throughout its history, Citibank was motivated by concern for innovation, people, values, and clients (13). Pandit was definitely half right. The principles of the founders definitely directed the bank’s actions, but despite the books heft, glossy photographs, and celebratory tone, Citibank and its forbearers definitely did not strive to make the world a better place.

Chapter 1 describes “a local bank with national ambitions” between 1812 and 1890. The City Bank of New York was chartered by the State Assembly in 1812 and was made a federal depository in 1814. The chapter explains that in its early years the bank “mainly served the commercial interests of the merchants who owned it.” In 1837 it nearly collapsed along with the national economic system in a financial panic precipitated after President Jackson and the Democratic Party refused to recharter the national Bank of the United States. The City Bank of New York survived the panic because John Jacob Astor, the wealthiest man in the country at the time, deposited substantial funds in the bank and installed Moses Taylor, “an importer of Cuban sugar,” on the bank’s Board of Directors.

Extended sections describe Taylor’s role in transforming the bank into a national financial institutions with international connections. Taylor is lauded as a “commodity specialist” who focused on Latin America and was able to “broaden City Bank’s client base” (36-47). The “commodity” that Taylor specialized in was sugar produced in Cuba by enslaved Africans smuggled into the Spanish colony in violation of international bans on the trans-Atlantic slave trade. Not only did Taylor broker Cuba’s sugar exports but he and the bank served as an “investment advisor for Cubans and sent samples of bylaws, reports, rules, and regulations to help them set up companies or commercial associations” (37). Taylor and City Bank became the “middleman” for plantation owners arranging for them to purchase equipment for “railroads, ferries, lighthouses, steam engines and machinery for sugar mills” (37).  As full service banker, Taylor arranged for the education of the children of the Cuban planters and slaveholders when they were in the United States and shopping trips for their wives. In response and gratitude, the Cuban planters laundered profits from slave produced commodities by investing approximately $3 million in the United States, worth almost $300 million today, employing Taylor as an agent.

Taylor later served as the bank’s President from 1855 until his death in 1882. During this period Taylor used sugar profits to help the bank survive a series of economic downturns and to purchase mines, railroads, and real estate. All of the companies that Taylor invested in were then required to use City Bank for financial transactions.

In the crucial months leading up to the American Civil War, Taylor promoted a compromise between the North and South that would leave slavery in place. During the war, Taylor was able to negotiate a federal charter for the bank, which became National City Bank of New York, in exchange for loans to finance the war effort. After the war, Taylor became a member of Tammany Hall, served on a commission that whitewashed the corrupt Tweed Ring that controlled New York City politics, and invested with Tweed in a series of business ventures. When Moses Taylor died in 1882, he was heavily invested in the company that would become Con Edison and was one of the wealthiest men of the 19th century. His estate was reportedly worth $70 million, or about $1.6 billion in today’s dollars.

Other Citibank “heroes” had similarly tainted careers. The commemoration celebrates Charles and James Stillman, father and son cotton-brokers. Stillman senior is identified as a “long-time National City Bank client.” He made his initial fortune profiteering during the Mexican-American War and expanded it by smuggling contraband cotton out of Brownsville, Texas and across the Rio Grande River during the Civil War. His business partner and later his son James were Citibank directors, and James eventually became bank president. James started out as a cotton broker after the Civil War, shifted into railroad investment, and then partnered with Rockefeller and Standard Oil as a Robber Baron promoting monopoly power in the United States. Maintaining his father’s interests in Mexico, during the 1870s James brokered a civil war that overthrew the Mexican government. Stillman also recruited former U.S. Treasury Department officials to work for Citibank, ensuring the banks increased wealth and political influence. Eventually Citibank dominated U.S. trade with Latin America and banking systems there, including Haiti where Citibank lobbied for a 1915 invasion by U.S. marines that led to a twenty-year occupation (see Peter Hudson’s Bankers and Empire).

Next to step up in leadership was Frank Vanderslip, who helped finance the U.S. war with Spain and the annexation of the Philippines, and then pushed the bank to invest in the archipelago. Charles Mitchell, Citibank chairman at the start of the Great Depression, was interrogated by Congress for suspicious banking practices, forced to resign, and was then indicted for income tax evasion, although the bank itself was not charged.

Over the years, the First National City Bank changed its name a number of times, but not its seedy business practices. In the 1970s it helped force austerity on a financial troubled New York City after the bank precipitated the crisis by divesting from city securities and refusing to back new financial instruments. In response, municipal unions withdrew millions of dollars in deposits from the bank. Citibank was also forced to pay fines levied by the state for charging consumers usurious interest rates.

Citibank was a vocal opponent of corporate boycotts of apartheid South Africa and one of the largest lenders to both the South African government and private corporations there. In the 1990s, Citigroup was implicated in a money laundering schemes with Mexican drug cartels and was investigated by Congress. In 2002, Citigroup was involved in one of the biggest corporate scandals in United States history when it was accused of helping Enron disguise debt and agreed to pay $101 million to settle charges relating to the Enron fraud case. During the 2008 financial crisis, a New York Times investigation uncovered evidence that Citigroup recklessly purchased toxic subprime mortgages. In 2012 Citigroup was one of five mortgage companies that agreed to pay a combined $25 billion to resolve allegations of loan and foreclosure abuses.

More recently, Citibank’s Mexican affiliate, Banamex USA, was discovered laundering drug money and illegally shipping it back to Mexico. As part of a legal settlement, Banamex USA “admitted to criminal violations by willfully failing to maintain an effective anti-money-laundering” compliance program and Citigroup agreed to pay $97.4 million in fines. In 2015, Citigroup was forced to pay another multi-million dollar fine because of other “oversight” lapses at Banamex USA.

In May 2016, government prosecutors in New York’s Eastern District announced that Citigroup was being investigated over ties to alleged bribery and corruption at FIFA, the international soccer federation. Traffic Group, a conspirator in the bribery charges, made wire payments totaling $11 million from a Citibank account in Miami. In February 2017, Citigroup paid an “administrative penalty” of 69.5 million Rand ($13 million) in South Africa for colluding to fix prices and manipulate financial markets. One almost good thing was that after years of financing coal production, in 2015 Citigroup claimed it would shift its focus to environmental sustainability mode. Of course in 2017 it was still the number one banker for coal power in the United States.

Moses Taylor and the banks other pioneers clearly were role models for current Citigroup executives, but not quite in the way Celebrating the Past Defining the Future portrayed them.