We Must Stop Valuing Guns More Than People 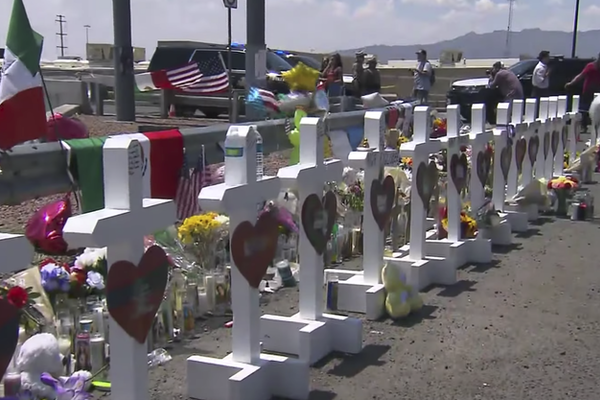 A memmorial for the victims of the El Paso mass shooting

There is a darkness within the soul of America. It shows itself with increasing frequency all across the country, from garlic festivals to shopping malls, from schools and churches and synagogues. But these mass shootings are only symptoms of the disease at the core of the nation. Some of the worst diseases have the fewest symptoms and the very worse have only one symptom: death with no warning.

The wave of mass shootings and the many thousands of others killed one by one are only symptoms of the American disease. It is a disease most people deny which does not make it go away. The disease in the American soul is that we as a society value guns more than people. It is a choice this country has made and one it has no real desire to cure.

That this country values guns more than people doesn’t prevent the predictable reactions after the shootings: The cries of oh no, not again. The wringing of hands. The tears rolling down the cheek. The expected question of why doesn’t somebody do something to stop this with the unspoken answer that nobody will do anything about it. We as a society are deeply hypocritical on this issue publically crying that something must be done without any real desire to change things. If we were to ever do something about this, which is improbable at best, we would have to first admit that we care more about guns and gun owners than the murdered and maimed victims of guns.

America’s deep devotion to guns expresses itself in many other ways most strongly expressed in the modern distortion of the plain meaning of the Second Amendment. When the Constitution was in the process of ratification by the original states one concern raised about taking this major step into a new government was whether each state could still maintain their local militia. Would, they asked, the Massachusetts or Georgia or other state militias be abolished or absorbed into a national army. The framers of the Second Amendment answered by guaranteeing “well regulated” state militias, now more commonly known as state national guards, alongside the federal army and navy, It never precluded individuals from owning firearms but it never granted civilians an unlimited right to own and use any gun they wanted. If “well regulated” applied to organized military units it certainly more than applied to individuals. The firearms industry and its lackey the National Rifle Association are lying when they claim the Second Amendment is anything more.

The cliché response to all mass shootings including the latest in El Paso and Dayton is to proclaim that our thoughts and prayers are with the victims. Thoughts and prayers are fine, but God can’t solve this problem. Nor is it enough to answer as most people, including a majority of gun owners, do on polls that they support background checks, assault weapon bans or other measures that would make at best a small dent in the problem. To think in the light of repeated shootings followed by nothing that answering a poll will change anything is in plain terms stupid.

If mass shootings are ever to end, which they almost certainly never will, it will require first admitting we as a nation have valued guns over people. Then we would have to make the deepest change in our soul since the Civil War when a majority stopped believing that black people were no more than livestock to be bought and sold. If we as a nation and as indiduals could change to that degree we might change things.

Because most of us will not be killed by a gun we can continue as before, pretending to care about something we have no will or intention to change. If we are not willing to change let us at least treat the disease by being honest about it.