Gregory Sumner is author of Detroit in WWII and Michigan POW Camps in WWII, both published by the History Press. 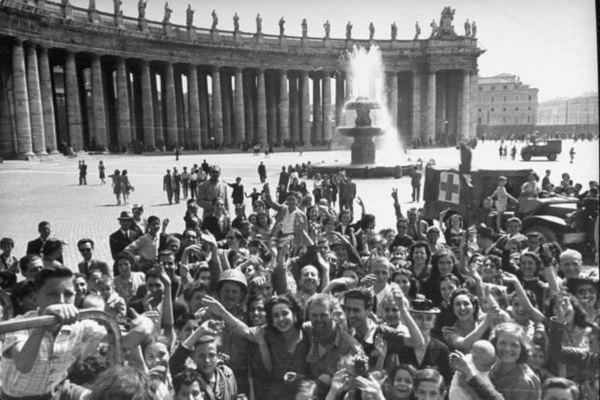 Celebrations as Rome is liberated

Amid the justifiable hoopla this week surrounding the launch of the D-Day invasion, it is important to note, too, the anniversary of an event that unfolded just two days earlier, on June 4, 1944--the Allied liberation of Rome.

Despite Churchill's promises of quick victory in the 'soft underbelly” of Hitler's Fortress Europe, the prize was hard-won, indeed—Italy proved a “tough, old gut,” in the words of the GI's master chronicler Ernie Pyle. The Germans were intent on fighting for every inch of their southern flank.

It began in summer '43 with Sicily, a campaign famous for the race that developed between General George Patton and Field Marshal Bernard Montgomery, his British rival, to be the first into the stepping-stone to the Italian mainland, Messina. Things got no easier after Italian dictator Benito Mussolini was arrested and Italy dropped out of the war. “All roads lead to Rome,” lamented theatre commander Sir Harold Alexander, “but all the roads are mined.” There were landings at Salerno, then chaotic Naples, where, as if on cue, looming old Vesuvius blew its top, giving the boys from Allen Park and Kalamazoo something to write about in their V-mail to the family back home.

Twin, bloody stalemates followed over the fall and winter: at the swollen Rapido River in the Appenine Mountains south of Rome, near Cassino, and at Anzio, the seaside resort where Nero once fiddled as his eternal city burned.  Stars and Stripes cartoonist Bill Mauldin captured the dilemma facing Yanks, Tommies, Poles and other infantry units as they struggled to overcome fierce German resistance: “(We) seemed to find itself generally looking up, not down, at the enemy.”

The breakthrough came finally in May of 1944, as advance troops pushed across the Alban Hills and then to the southern outskirts of Rome.  Fearing another Stalingrad, Hitler agreed to allowing his forces to pull back to positions 150 miles north, where the war would rage on for another full year. Fifth Army chief Mark Clark's jeep convoy got lost on the Via della Conciliazione near St. Peters, until a priest from Detroit offered directions to the city center. “They didn't even let us have the headlines for one day,” Clark was heard to complain when the gaze of the press shifted, suddenly and overwhelmingly, to Normandy.

Is was in any case a glorious moment of triumph, paid for by the sacrifice of the 7,860 mostly young men who lie today buried in the American Cemetery at Nettuno, Anzio's sister-city.  “My God, they bombed that, too!” a member of the 1st Special Force exclaimed as columns in olive drab marched past the Coliseum.  Ex-pat Jane Scrivener recorded the sight as they moved down the posh Via Veneto, marking for Rome's citizens the end of months of brutal Nazi occupation:

They were dusty, battle-worn and unshaven, but they smiled

and waved in response to the greetings of the crowd. They

had roses in the muzzles of their rifles and miniature Italian

flags, which had been thrown to them. They had roses stuck

in the camouflage nets of their helmets and in their shirts.

“One has read these things in books, and accepted them as fiction,” Scrivener added, “never dreaming of witnessing them as we did today.”