We Judge Presidents in part by Who Precedes and Follows Them 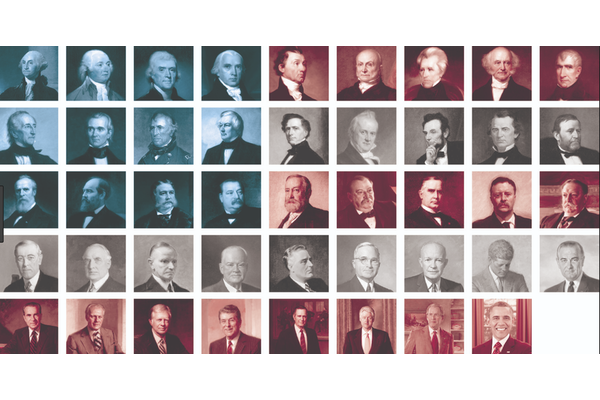 I’ve been interested in the presidency since I was 10 years old. On WWGH 107.1 FM, Marion, Ohio, (Home of Warren G Harding), I comment weekly on political events and the host, Adam Lepp, has granted me a title that does not really exist, although I think it should be a word—presidentologist.

I am also fascinated by how one evaluates and ranks presidents. Previously, I’ve written about presidential ranking changes over time. Now, I want to discuss a different element of how historians and the public rank presidents: the “company they keep.” Presidents are often judged in comparison to who preceded and followed them. Some Presidents are fortunate to come before or after a President who was not a great success so they seem like a better president in comparison. Others follow and precede a President who was perceived as successful, dimming their reputation.

For example, Thomas Jefferson was in office after John Adams and before James Madison. In the latest CSPAN poll ranking of presidents in 2017,  scholars consider Jefferson a major success as they rank him 7th, while Adams was ranked 19th and Madison 17th.  John Adams also served after George Washington who was rated  2nd, so he suffers even more in historical assessment. Of course,  the fact that he was defeated for reelection does not help his comparative reputation.

Then, we have the case of Abraham Lincoln who followed James Buchanan and was succeeded by Andrew Johnson. Historians consider both Buchanan and Johnson as the absolute bottom of the Presidency—they rank them 43rd and 42nd, respectively. That just adds to the stature of Lincoln, who is judged in most scholarly assessments as our greatest President, and is first in the C Span poll of historians.  Ironically, Lincoln had far less government experience than either Buchanan or Johnson.

William Howard Taft was in office after Theodore Roosevelt and before Woodrow Wilson, and therefore suffers by comparison.While Teddy is ranked 4th by scholars and Wilson 11th, Taft is ranked 24th. Taft’s reputation is helped a bit because he later served as Chief Justice of the Supreme Court, but he also suffered the greatest reelection defeat in American history.

George H. W. Bush  served between two charismatic Presidents, Ronald Reagan and Bill Clinton and he is rated lower by comparison. While Reagan is ranked 9th and Clinton 15th, in the latest CSPAN poll, Bush was 20th. Of course, Bush’s juxtaposition with these presidents is only part of it: he suffered the second greatest reelection defeat in American history, only surpassed by Taft.

Finally, Barack Obama is already rated 12th by scholars just two years after leaving the Presidency.  But he is also extremely fortunate, and will continue to be so in the future, as he succeeded George W. Bush and preceded Donald Trump. At this point, the second Bush is rated 33rd and Trump is rated down in the basement with James Buchanan and Andrew Johnson. This will shape the image of Obama for the long run of history.

So life is unfair, and that certainly applies to Presidents who would surely prefer to be the success between two failures  than the lesser figure between two giant figures in the Presidency.