The Value of Rating Presidents

Susan Swain is the co-CEO of C-SPAN and co-author of The Presidents: Noted Historians Rank America's Best—and Worst–Chief Executives. 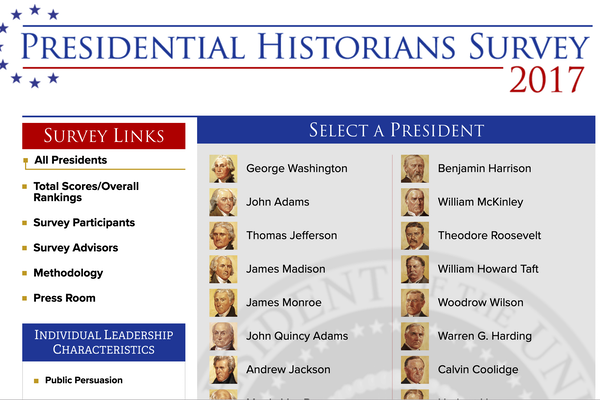 The performance of modern presidents is continually addressed in myriad public opinion polls as they serve. Presidential leadership surveys are intended take longer views of our chief executives, while also providing comparisons with their predecessors.  These surveys can be seen as the progeny of historian Arthur M. Schlesinger, Sr., who made the initial foray into the field in 1948 for the then widely-popular Life magazine. As historian Douglas Brinkley notes in his introduction to C-SPAN’s 10th book, The Presidents, Schlesinger's survey, conducted soon after Franklin Roosevelt's impactful presidency and at the dawn of the broadcasting age, demonstrated "a tidal wave of interest in this new way of looking at all presidents simultaneously," judging by the "bags of colorful letters" Schlesinger received about his results.

C-SPAN followed in Dr. Schlesinger’s footsteps beginning in 2000 with our initial Historians Survey on Presidential Leadership, which ranked every president from best to worst. It was envisioned as a more formal academic follow-on to a year-long C-SPAN biographical television series, American Presidents: Life Portraits.

Just as Dr. Schlesinger's project had in 1948, C-SPAN's 2000 survey attracted much attention in the media and among historians, and so it continues. C-SPAN has now conducted three such surveys—in 2000, 2009, and 2017—with ninety-one historians participating in our most recent ranking. We ask presidential historians to rank individual performance across 10 qualities of leadership. Conducted just as a sitting president leaves office, we aim to create a first assessment for history. In 2000, Bill Clinton, only the second president to be impeached, nonetheless debuted with an overall rank of 21 of the then 42 men. In 2009 George W. Bush entered the field on the heels of a global financial crisis and an ongoing war; historians ranked him 36th overall. In 2017, Barack Obama's history-making presidency debuted in our survey in an impressive 12th place.

C-SPAN's three surveys take their place among a few other contemporary rankings of presidents, such as the six-time Sienna College historians poll. No matter who's conducting the survey, the top three places seem cemented among the pantheon of Lincoln, Washington, and FDR. For the other presidents each survey is but a snapshot in time, judgments rendered, to borrow a phrase from Donald Rumsfeld, based on "known knowns," but without the benefit of "unknown unknowns."  Much has changed in the nearly two decades since C-SPAN ran its initial survey—three more presidencies; newly opened archival records; new history books written. Our base of historians has also changed with retirements, deaths, and new hires. Importantly, our society continues to transform, impacted by demographics, technology, and evolving sensibilities. These many factors make the changing assessments of the presidents fascinating to watch.

It's particularly interesting to see how presidents' rankings change after their debuts. Bill Clinton advanced six places between 2000 and 2009, to an overall rank of 15, where he remained in 2017, with his highest marks in "economic management," and "equal justice." In 2017, with the benefit of eight years' hindsight, George W. Bush edged out of the bottom 10 to an overall rank of 33, with his highest ranking (19) in "equal justice." Perhaps unsurprisingly his lowest numbers are in "economic management" (36) and "international relations" (41). When our next survey is done following the Trump presidency, Bush 43's numbers will be worth keeping an eye on. 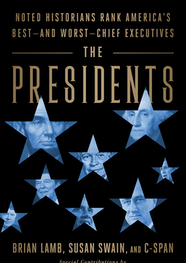 There are other notable changes:  Andrew Jackson, for instance, held the 13th spot in our 2000 and 2009 surveys. By 2017, he had fallen five places, the most of any president. Jackson placed just 38th in "equal justice," driven largely by increasing disapproval of his policies toward Native Americans. Another interesting change is the ascension of Dwight Eisenhower into the top five. Ike has moved up four spaces since 2000—the most of any president in the top 10 — as the "hidden hand' theory of Eisenhower's leadership gains wider acceptance.

Acknowledging that presidential lists are simple reductions of complicated realities, we're still pleased that they ignite popular interest in history. Presidential rankings play nicely into our national numbers obsession—they are quick, fun, and highly shareable on social media.  They foster lively debate about contemporary presidents and even help resurface some of our most obscure presidents; think Millard Fillmore (#37), or James Buchanan (dead last at #43).

In this highly partisan age of President Trump, people invariably ask us how he fares on the 10 leadership attributes. We won't know for sure until the end of his presidency when, once again, C-SPAN will ask historians to formally evaluate him in the context of his predecessors. You, however, can use the ten metrics to form your own judgment of his performance at this midway point of his first term.  And as campaign 2020 gets underway, the metrics also provide a solid starting point for voters to assess the leadership skills of the long lineup of individuals vying to replace him.