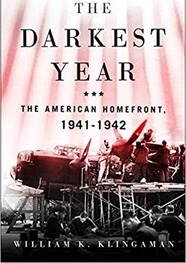 No one should be surprised if a substantial minority of American voters remains unconvinced that Russian agents interfered in the 2016 presidential election, or if an even larger percentage of the American public downplays the urgency of the Russian threat to the nation’s electoral system.  Complacency in the face of foreign dangers is nothing new in the United States; during World War Two, it was plainly visible among Americans less than two months after the Japanese attack upon Pearl Harbor.

In the days immediately following December 7, 1941, outraged patriots flocked to recruiting stations, purchased more than $1 billion worth of war bonds, and destroyed all the Japanese-manufactured merchandise they could find — including Christmas tree ornaments, silver bells on street lights, and china plates which rampaging customers smashed on department store floors.  Political leaders of both parties pledged their loyalty to the Roosevelt administration. But the initial outburst of enthusiasm and unity soon faded.

By the middle of January — following the fall of Guam, Wake Island, and Manila to Japanese forces — numerous commentators noticed that Americans seemed to be going about their business “apparently unmindful,” as the Chicago Tribune complained, “of the soldiers who are dying in the Philippines,” notably on the Bataan peninsula.  After traveling across the country, newscaster Edward Murrow agreed that most Americans regarded the war with no sense of urgency, viewing the conflict instead as a spectacle, and themselves as mere spectators. Upon completing his own cross-country journey, columnist Walter Lippmann lamented “the unawareness, the overconfidence, and the complacency” of Americans.

“I find all around me a smugness and satisfaction which to my mind are entirely unjustified,” concluded William Batt, director of the War Production Board’s materials division.  “It is no secret, that, by and large, the American people have not yet settled down to the grim task of fighting for their freedom and their lives,” noted the Washington Postwith a palpable sense of frustration. On Capitol Hill, veteran Congressman Hatton Sumners of Texas complained that “I do not see yet that vital, stirring consciousness of responsibility, consciousness of danger . . . which we have got to have.”

After touring defense production plants on the Pacific coast in early 1942, Congressman Lyndon Johnson noted that Americans’ “lack of mental concern is evident on every facial expression. Their complacency, indifference, and bewilderment are an open invitation to [enemy] direction.”  In Louisiana, Governor Sam Houston Jones grew so alarmed at his constituents’ lethargy that he mounted a three-week, statewide speaking tour in a sound truck with the words “Awake America” on the side.

Declining war bond sales provided hard evidence that a significant segment of the public remained disconnected from the war effort.  In January, Americans purchased $1.075 billion worth of bonds, although only one in seven American wage earners bought any bonds at all. February sales tumbled to $711 million, and March fell to $565 million; some people reportedly hesitated to buy bonds because they believed rumors that Roosevelt was putting the cash into his personal savings account.

Instead of buying war bonds, American consumers bought and hoarded goods which they expected to soon become scarce:  sugar (sometimes 100 pounds at a time), nylon stockings, radios, wool clothing (after federal officials announced that the Army would require most of the nation’s wool supply over the next twelve months), bicycles, soap, socks, and women’s foundation garments, which were disappearing rapidly due to a shortage of rubber.  From coast to coast, retailers sold more merchandise to consumers in the first several months of 1942 than at any time in the nation’s history.  Treasury Secretary Henry Morgenthau repeatedly warned the public that excessive spending and the subsequent rise in prices could cripple the war effort, and merchants in New York, Philadelphia and Cincinnati took out newspaper ads begging their customers to stop buying so much.  “You cannot buy victory and luxury in the same market at the same time,” warned the New York Times, but consumers kept on stockpiling merchandise.

Other Americans, fearful that the Roosevelt administration planned to confiscate their savings to pay for the war, withdrew their savings from banks and buried their cash in a safe (rentals of safe-deposit boxes surged) or stuffed it in a sock, instead of lending it to the federal government or investing it for productive use.  “Hoarded dollars are idle dollars, slacker dollars,” one New York bank reminded its customers.  “Hoarding in times of war amounts to sabotage against the Government.” Still the drain continued; by mid-April, Americans were hoarding an estimated $500 million to $1 billion.

By far the most prevalent explanation for the public’s “dangerously complacent” attitude was the insistence of military censors and administration spokesmen in painting the military situation in a far too optimistic light.  As the War Department and the Navy controlled the release of military information, official communiqués downplayed or concealed American defeats — “Never before in history,” complained one critic, “have so few kept so much from so many” — and released stories that transformed relatively minor triumphs into brilliant victories.  “They are misleading,” charged the Washington Post,” in the sense that they are utterly out of proportion.”

The government’s practice of distorting news reports fueled the conviction of many Americans that “one American can lick ten Japs or five Germans and that is all there is to it.” The public’s overconfidence was boosted further by the Roosevelt administration’s decision to keep arms-production figures secret, while promoting reassuring  — but misleading — news stories about the progress of the nation’s output of war goods, typically accompanied by multicolored charts and graphs of upwardly spiraling production and the same adjectives used over and over: “huge,” “enormous,” “immense,” “tremendous,” or “magnificent.”  “We here in the United States,” observed journalist Alistair Cooke, “studied our own production story and assumed the victory.”

Not even the loss of Bataan and Corregidor in April and May could shock Americans out of their complacency.  Factory workers who were earning more than a subsistence income for the first time in their lives spent their newfound wealth on good times in restaurants, theaters, night clubs, and strip joints.  Sales of jewelry and champagne soared.  And throughout the spring and summer, Americans bet more money on sports than ever before.  One after another, horse-racing tracks across the nation broke their own records for wagers; on Kentucky Derby Day, bettors at Churchill Downs wagered nearly $2 million on the first leg of the Triple Crown, while nearby booths selling defense bonds reportedly took in less than $200.

Meanwhile, German U-boat commanders were waging an increasingly successful campaign — “Operation Paukenschlag,” or “Drumbeat” — against American and Allied merchant shipping along the East Coast.  The task of sighting and sinking slow-moving vessels, particularly oil tankers, was made easier by carelessly illuminated shops, homes, and thoroughfares along the coast.  Sometimes visible for ten miles or more at sea, the lights from shore silhouetted the tankers and created a “neon shooting gallery” for the submarines.  Despite the horrific toll — by the end of April, nearly two hundred ships had been sunk, and more than four thousand sailors and passengers killed — a disturbing number of Americans ignored repeated requests by civilian and military authorities to dim or extinguish their lights.  Dimout inspections in early June consistently revealed widespread and “flagrant violations” of Army regulations; New York City remained a “murderous mound of light”; and a sailor on a merchant ship passing a New Jersey resort town at night noted that “the lights were like Coney Island.  It was lit up like daylight all along the beach.”

In late summer and autumn, a new problem emerged as a rising wave of absenteeism at war plants and shipyards undercut arms production efforts.  “The extent to which absenteeism impedes our war effort is beyond belief,” grumbled a high-ranking official of the War Manpower Commission, as workers increasingly took time off to nurse hangovers (“Monday morning sickness”), to look for better-paying jobs, or simply to engage in shopping sprees (“Pay-day richness”).  In November, a Senate investigating committee headed by Harry Truman reported that excessive worker absences were reducing production by as much as ten percent in many war plants; in some shipyards, the absentee rate reached 18 percent, while Ford’s massive Willow Run bomber plant in Michigan, suffered absences of nearly 25 percent.  Federal officials attempted to combat the trend with posters and slogans designed to make “work skippers” feel like slackers, but to little effect.

One year after Pearl Harbor, many Americans still refused to give their wholehearted commitment to the war effort; calls for sacrifice often had been ignored, and restrictions evaded.  “There’s one thing America hasn’t yet got around to,” claimed the Carrier Corporation in an early December appeal to the public.  “We’re still waiting for that old-fashioned American ‘drive’ that hits the line head-on and sweeps everything before it.”

The war would have to wait a little while longer.