Were the Russians Behind Fake News that Helped Bring Down a Labour Government in 1924?

Gill Bennett is an Associate Fellow of RUSI. She was Chief Historian of the Foreign Office from 1995-2005, and senior editor of its official history of British foreign policy, Documents on British Policy Overseas. As a historian in Whitehall for over forty years, she provided historical advice to twelve foreign secretaries under six prime ministers, from Edward Heath to Tony Blair. In 1998, in her role as Chief Historian of the Foreign Office, she was commissioned to write a report into the Zinoviev Letter affair for the Foreign Secretary, Robin Cook. She is the author of The Zinoviev Letter: The Conspiracy that Never Dies (Oxford University Press, 2018). 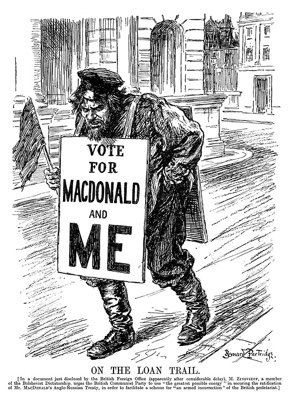 In October 1924, during the general election campaign that followed the fall of the first ever British Labour government, a document hit the press and the streets that caused a political sensation—and has been the subject of controversy ever since. It was a letter supposedly written by Grigori Zinoviev, head of the Comintern (the Soviet propaganda organization) to the British Communist party, encouraging them to greater revolutionary effort and to help get Labour re-elected. 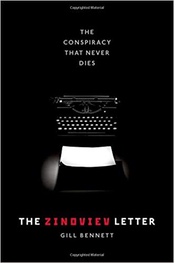 The letter arrived in London through Secret Service channels, was circulated in Whitehall and to the military, leaked to the press and used during the election campaign to damage Labour. ‘CIVIL WAR PLOT BY SOCIALISTS’ MASTERS: MOSCOW ORDERS TO OUR REDS screamed the headlines in the Daily Mail.

Though the Conservatives would have won the election even without the letter, the episode humiliated the Labour party, and still has resonance in British politics in 2018. The Zinoviev Letter has come up in almost every election campaign since 1924, and been mentioned regularly as a classic example of political dirty tricks. And yet no one has ever seen an original of the document, which was almost certainly forged by anti-Bolshevik plotters in the Baltic States, and manipulated by right-wing interests in Britain that may have included members of the intelligence services.

The letter itself was unremarkable—Zinoviev had, indeed written many like it, even if he did not write this one—but its impact was both powerful and long-lasting.

The Zinoviev Letter has been described as a classic piece of disinformation: it may be impossible to determine exactly who wrote it, on whose authority and with what intention, but it was undoubtedly used for political purposes by a number of different interest groups. It might also be described as fake news in the sense that a forged document dominated the news agenda in October 1924, and not a decade has passed since without its featuring in the media.

But the trouble with terms like disinformation and fake news, together with deception and propaganda, is that their meanings are both disputed and overlapping, and are different depending on the point of view of an individual, organization, political grouping or state. Truth and falsehood are subjective terms in this context, particularly in the age of social media and the 24-hour news cycle. I prefer to call the Zinoviev Letter an example of information warfare, waged in this case to influence an election result and undermine the legitimacy of the socialist Left.

There are two particular aspects of the Zinoviev Letter episode that are worth emphasising for their present-day relevance: one strategic, one tactical. The first is the use of information as a tool for the purposes of disruption, influence and subversion. The Soviet regime established after the Bolshevik revolution of October 1917 regarded propaganda and disinformation as a principal and legitimate tool of statecraft. This was unsurprising since its aim was to incite world revolution, as well as reinforcing the success of the communist ideal to an internal audience, the peoples of the USSR. The distinction between truth and falsehood was not material, since the ends—the destabilizing of capitalism and the security of the Soviet state—justified the means.

Despite the lack of modern technology, the Bolsheviks achieved global reach through a sophisticated global network of agents and agencies motivated by ideology, greed and a predilection for subterfuge. It is hard to counter effectively those who use information and disinformation interchangeably as a strategic tool, and who have little regard as to how they are perceived externally. Even with the availability of sophisticated technological tools that can identify deliberate disinformation and trace its source, proving its impact on an event or outcome is much more difficult: detecting foreign interference in an election process is easier than proving it affected the result. This was as true in 1924 as it is nearly a century later.

The Bolsheviks made no secret of their desire to undermine the West, and adopted a standard response if challenged: denial, while accusing the challenger of spreading disinformation. In October 1924, the British Foreign Office drafted a letter of protest to the Soviet government, in response to what the Labour prime minister, Ramsay MacDonald, called an unwarranted act of provocation and interference in the British political process. The archival evidence (including Russian evidence) suggests that when this protest arrived, Soviet ministers initially had no idea what the British were talking about: one of the main reasons, in my view, to believe that the Zinoviev Letter was a forgery. But the Politburo had no doubt how to respond: first, deny everything; second, insist that the British themselves must be responsible for the letter. Denial of guilt and an attempt to deflect responsibility on to the accuser is a classic response to information warfare, today as well as in 1924. It is a recognised tactic with a dual purpose: to discredit the opponent, and to convince a domestic audience of what a state wishes its people to believe.

The weaponization of information is nothing new. In times ancient and modern, rulers and government have disseminated information intended both to deceive opponents and to influence their own citizens, and to promote their own agenda. In the past twenty years, however, the internet and rapid technological advance have enabled information warfare to be waged globally and at dizzying speed. The source and intent of attacks are diverse, well-concealed and constantly evolving, making flexible defense strategies essential. Governments round the world are engaged in information warfare, both offensively and defensively. But this warfare does not only affect states or organizations; it affects individuals as well.

In 1924, the British media were largely confined to a narrow range of daily newspapers and magazines: nevertheless, the Zinoviev Letter made a considerable public impact, and a surprisingly large number of people, if asked, would have known what it was all about. Today everyone is bombarded constantly with information, a barrage we may contribute to through our own use of social media, for example. This means we have a responsibility. To avoid being victims of the information war, we must question what we see, hear and read, and think about where it comes from and what its intent might be. Conspiracy theories are very hard to disprove: but at least we can be on our guard against those, like the Zinoviev Letter of 1924, that seem never to die.