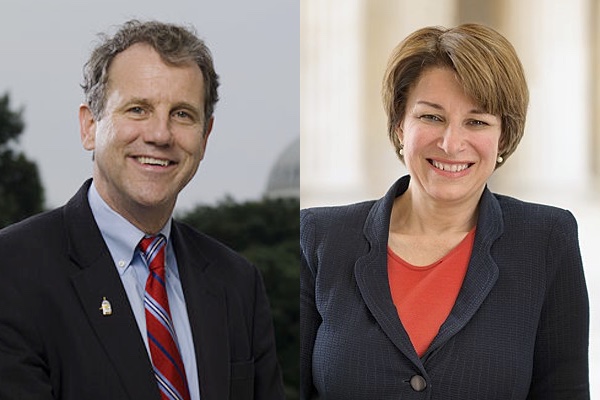 The midterm elections of 2018 have brought to the forefront, and given more attention to two Midwestern Democratic Senators who offer the possibility of regaining the Midwest for the Democrats in the 2020 Presidential Election cycle. Not only did Michigan, Wisconsin, and Illinois witness the regaining of governorships for Democrats in 2018, but also the midterm elections added stature to two members of the Senate, both reelected to their third terms, and both having an appeal to the white working class which Hillary Clinton lost in 2016, leading to the victory of President Donald Trump.

Sherrod Brown of Ohio and Amy Klobuchar of Minnesota stand out as appealing “liberal” politicians who have managed to thrive in an atmosphere of extreme partisanship, and yet have the reputation of being able to “cross the aisle” and work with Republicans. At the same time, they have solid records of accomplishment, without the often attendant histrionics too much present in today’s politics.

Sherrod Brown has had a long, distinguished career, having spent eight years in the Ohio legislature; eight years as Ohio Secretary of State; eight years as a Congressman; and now starting his 13th year in the US Senate, after an impressive victory in November.

Brown has been a strong progressive over his career and is in the tradition of two earlier progressive Democratic Senators who inspired many, namely John Glenn, who served four terms in the Senate from 1975-1999, and briefly sought the presidency in 1984, and Howard Metzenbaum, who had three terms in the Senate from 1977-1995, and was always an exceptional liberal firebrand.

Brown has excelled in support by the electorate and is seen by many as a younger version of Joe Biden, a full decade younger than the former Vice President. Both of them have the ability to appeal to working class whites, a crucial demographic in elections. He has been a leading member on important Senate committees, including Banking, Housing and Urban Affairs, where he’s the ranking member. He is also a member of the committees on Agriculture, Nutrition and Forestry, Finance, and Veterans Affairs. Brown is considered a “progressive populist”; he has long been a critic of free trade agreements, making him very appealing to the working class of his state and section.

Brown is, however, not as dramatic and outspoken a politician as Howard Metzenbaum was, although he can fight for his causes with vigor. His appeal to working class whites has drawn national attention. In a tough state for Democrats historically, Brown has won 56, 51 and 53 percent of the vote in his races in 2006, 2012, and now 2018, respectively. Do not count him out.

Klobuchar has the advantage of being the only potential woman nominee for President in 2020 who is not from the Atlantic or Pacific Coast, which are considered automatic areas of Democratic support in recent times. While Minnesota has been generally Democratic in recent years, Klobuchar offers the opportunity to put a successful Midwesterner on the ballot, and has a longer and more substantive career of accomplishment in the Senate than other potential women candidates, including Elizabeth Warren of Massachusetts, Kirsten Gillibrand of New York, and Kamala Harris of California.

Klobuchar has an appealing family story. She overcame an impoverished and troubled childhood to become a successful and renowned prosecutor in Hennepin County (Minneapolis) for eight years. She is now beginning her third term in the Senate. Klobuchar has sponsored or cosponsored 98 pieces of legislation that became law through early 2018. She serves on the Judiciary Committee, where she performed well in her questioning of Supreme Court nominee Brett Kavanaugh. She also serves on the Joint Economic Committee, Commerce, Science, and Transportation, Agriculture, Nutrition, and Forestry, and is the ranking member of the Rules and Administration Committee. She was up for consideration as Attorney General under Obama and has been mentioned as a potential future Supreme Court nominee under a Democratic President. Many have believed she would make a calming, tough presidential candidate for 2020. She has a warm personality but dogged determination to promote the progressive causes she has fought for in her career. She has won her Senate seat by vast margins of 58, 65, and 60 percent in 2006, 2012, and 2018, respectively.

Of course, either Sherrod Brown or Amy Klobuchar could also be a potential Vice President in 2020 if they were unable to win the presidential sweepstakes. At this early point in the early stages of the 2020 campaign, this author would imagine that Klobuchar would be more likely to succeed in her quest than Brown and seems at this point certain to run. Brown may or may not run. So many US Senators, probably close to a dozen, are planning to announce for President, and Brown’s own declaration that he did not grow up with the motivation and desire to be President, could convince him to stand aside.

But, as politics always proves, there is no way to predict what the fallout will be from the multicandidate race that is about to begin in earnest in the new year of 2019. In any case, the Midwest is a crucial battleground for 2020, and gives attention to both Brown and Klobuchar.