Was Sputnik Really the Beginning of the Space Age?

Frank J. Engo is a history-tech expert and author of two computer programming books. Frank is the webmaster for OfficeSalesUSA.com and has nearly three decades experience programming and writing. 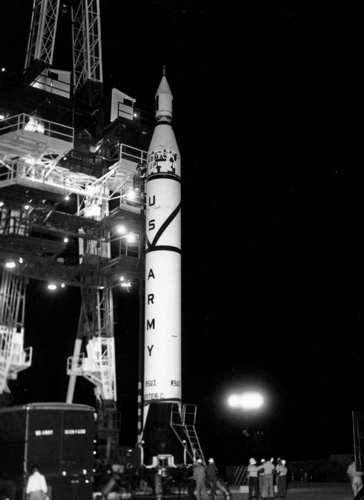 Although you will often hear the notion that the space age began in 1957 with the launching of the soviet made artificial satellite known as Sputnik, the actual historical record is not so simple. While it is certainly correct that the soviets did launch the first satellite into orbit a few months before the United States launched its first satellite, long before that, America had completed a series of successful launches into space and achieved many firsts. Among some of these accomplishments were the first animals launched into space in suborbital flights, the first living organisms safely returned from space, the first comprehensive high altitude studies, the first true and independently developed sounding rockets and several record-setting launches that greatly exceeded the Karman line (i.e., boundary between Earth's atmosphere and space). So why are these accomplishments not remembered? To understand this, a brief history of the space race reveals there is much more to this story than most people realize.

Before World War II, American rocket scientist Dr. Robert H. Goddard began experimenting with rocket propulsion. Goddard had many patents and published the results of his work in which the German rocket scientist Wernher von Braun used as the first prototype for what would ultimately become the V-2 rocket. Goddard, who died in 1945 and whose work was eventually awarded 214 U.S. patents, may not have reached space himself but his liquid oxygen-gasoline rocket and gyroscopic guidance system were especially crucial developments in the space race.

After the war, Wernher von Braun surrendered to America and the United States captured enough parts to build and launch 67 V-2 rockets. On May 10, 1946, Wernher von Braun demonstrated a V-2 launch at the White Sands Proving Ground in southern New Mexico that reached an altitude of 71 miles. At 9 miles above the Karman line, the V-2 was the first rocket to achieve a suborbital flight. On February 20, 1947, fruit flies became the first living creatures to survive a space flight on board a modified V-2 rocket and were recovered by parachute in Project Blossom. Albert II (a rhesus monkey) subsequently reached space at 83 miles altitude (134 km) on June 14, 1949 though a parachute accident on descent sealed his fate. Albert II did not survive but neither did Laika, the Soviet dog that is often incorrectly credited as the first animal in space though Laika was the first animal to orbit the planet.

So why are people not as familiar with these achievements? Besides the obvious reason that we did not develop the V-2 rocket ourselves, no agreed upon standard of where space begins was yet established so these experiments were regarded at the time as simply "high-altitude flights." Moreover, nobody wanted to give credit to a former Nazi but many people believe Wernher von Braun was never a true Nazi and Wernher von Braun would later go on to play a pivotal role in the American space program.

Although these accomplishments alone would be significant, the story does not end there. On May 22, 1946, the U.S. launched its own rocket into space. The WAC Corporal missile (developed independently of the V-2 rocket) reached the edge of space by the U.S. 50-mile definition. Upon success of the WAC Corporal missile, an improved sounding (research) rocket known as the Aerobee RTV-N-8 became the first American made rocket to exceed the Karman line at 73 miles (117.5 km) on March 5, 1948. The all-American made Aerobee sounding rocket carried scientific instruments to study cosmic radiation and would go on to perform many similar missions.

On February 24, 1949, the U.S. Army in Project Bumper subsequently launched an experimental two-stage rocket (the RTV-G-4 Bumper) that set a record altitude of 244 miles (392.68 kilometers). The first stage was a modified V-2 rocket. The second stage was a fully American made WAC Corporal missile fitted with solid fuel gyro-stabilizing spin rockets and larger fins recessed into the V-2 nose cone. The Bumper-5 record stood for many years and also set a record velocity and highest radio communication. Although Bumper-5 was not technically the first multistage rocket as both the Corporal and Aerobee rockets used solid propellant booster stages to clear the launch tower, it was a substantial leap forward. The experimental vehicle may not have been a practical design or the first rocket to cross the Karman line but it demonstrated the potential of a multistage rocket and how high velocity stage separation could be achieved. The Bumper-5 launch was also historic in that it was the first time a rocket went well beyond the brunt of the atmosphere.

On September 20th, 1956, the U.S. military set a new benchmark with a three-stage rocket known as the Jupiter-C that reached an astonishing 682 miles (1,097.57 kilometers) in space. While its first stage (a Redstone missile) was based on the V-2 rocket and the many improvements von Braun and the Army Ballistic Missile Agency (ABMA) made in terms of reliability and performance, the three stages and altitude attained were enormous technological achievements. They shouldn’t be ignored. In fact, the ICBM that would go on to launch Sputnik a year later still owed a great deal to captured German technology and even some American innovations that Goddard had pioneered many years before.

The Jupiter-C, though underutilized, was quite capable of launching a satellite into orbit and would go on to perform two more successful launches before Sputnik. The Jupiter-C even contained an inert (deactivated) fourth stage that von Braun wanted to use to house a satellite. However, President Eisenhower refused to allow the military to launch satellites because he did not want a rocket developed by the military to set in orbit the world's first satellite. Concerned that the Russians would consider this provocative, a "civilian" missile system known as Project Vanguard was given the green light instead.

Developed for scientific research, the Vanguard project may have seemed prudent at the time but the rocket would prove to be less stable and ready. It was only upon the embarrassing failure of the Vanguard rocket on live TV that the Jupiter-C was finally reconfigured to launch a satellite and renamed the Juno I. Had the Jupiter-C been used sooner, an American satellite could have been placed into orbit well in advance of Sputnik. The actual conversion to a satellite launcher required less than the 90 days von Braun had long professed he would need. Moreover, the Jupiter-C already successfully demonstrated separation of stages but it was only permitted to send back a reentry vehicle. Nevertheless, to suggest we made no significant contributions in the space race before Sputnik and that the space age only began with the launching of the world's first satellite is neither consistent with the facts nor an accurate depiction of the scientific and engineering achievements that proceeded the event.

Well before Sputnik and even the formation of NASA, the U.S. achieved several notable milestones in the space race. Although these accomplishments are often downplayed for various reasons, those early successes were still substantial and it was Robert Goddard, the father of modern rocketry, who made it all possible.

The United States rightly deserves more credit than it is typically given during the pre-Sputnik era. At a time when the Soviets were still trying to replicate the V-2 rocket, we had already independently created two powerful sounding rockets that achieved suborbital flights. Moreover, we developed the first research programs that studied the challenges of living in space and were the first to go well beyond our planet.

To be sure the Russians deserve credit for taking space research to the next level, but it is a disservice to us to not recognize our own early accomplishments. We invented both the liquid propellant and first efficient solid-propellant rocket engines, the gyroscopic guidance system that makes it possible for a rocket to keep vertical stability and we were the first to send animals into space, the first to bring back living organisms, the first to conduct research on the effects of cosmic rays on life, the first to film the Earth from space and the first to go well beyond Earth's atmosphere with two ground-breaking/record-setting multistage rockets. It is time to change the narrative and take pride in our own achievements.